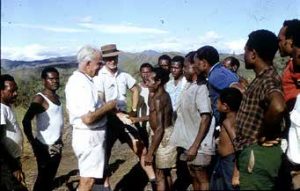 From 1965 through to 1968 I was the mechanic for Jascar Ltd in Kainantu in the Eastern Highlands. Jascar was a coffee processor and coffee plantation owner and coffee buying company with Mike Collins running the company.

Mick Leahy was one of the directors of the company & I met him many times & got to know him on a casual basis. Mick was a very interesting man to listen to when he used to talk about his exploits while looking for gold 30-odd years beforehand

On one of his visits to Kainantu in 1967, I had to go to the Forai (Fore) District to recover a broken-down vehicle.  Mick asked if I’d mind if he came along as he said that he’d walked through the area 30-odd years ago. Would I mind? Ha, I was honoured! Mike decided to come along also.

When we arrived at Forai, Mick looked around and said that the area looked familiar, even after all the years since. He told us there was a village on the other side of this large hill where he hired some native carriers including a young native called Namu. He was impressed with the young man, especially because Namu was the only one willing to stay with Mick while the rest of the men wouldn’t leave the area. Mick said that he was such a good honest worker that when they finally got back to Lae he gave Namu a ride in a plane, bought him some knives and other equipment that Namu had no idea existed and an axe.

When I was working on the broken-down car some men came to see what we were doing (as they did at that time), Mick asked them where they come from and they said at the village over the hill. Mick asked if there was a lapun there named Namu. They said that he still lived there and Mick told them to go and get him.

About 30 minutes later a lot of people came over the hill, among them was an old bloke carrying an old axe. Mick squinted and said “that’s him”. The old bloke stopped about 20 – 30 feet away and squinted. The look on his face when he realised the identity of the white man was priceless. He yelled out “Masta Mick“, dropped the axe and ran up to Mick and grabbed Mick’s hand with both his hands. He was really excited to see Mick and that Mick had asked for him.

Mick pointed out the well-worn axe head to Mike and myself and told us that that axe head was the first steel axe to come into this area.

He then told all the men to sit down and he told them all about the old days and what a brave man Namu was and that everybody should treat Namu with great respect as Namu was a hero in Mick’s eyes. Namu had a grin from ear to ear.

Mick laid it on really thick and as we left later Mick said that Namu will be riding high for some time on the wrap that he gave him in front of the villagers. 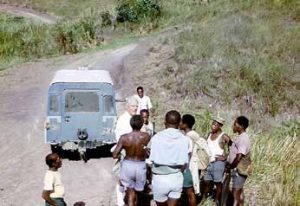 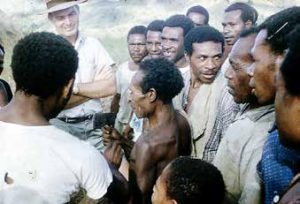 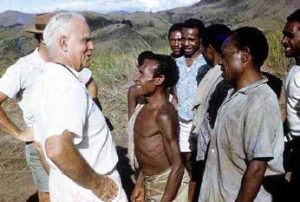 Michael “Mick” James Leahy MBE was an Australian explorer and gold prospector, famed for his discovery of the Highlands area of Papua New Guinea.

Mick Leahy set off from Salamaua in 1930 in search of gold. He travelled up the Markham River into PNG’s rugged interior, but there was no gold to be found. He did, however, discover a handful of tribes who had never seen a white man. The following year Mick and his brother Dan were given a grant by a gold mining company to search deeper into the Highlands. Again, they didn’t find any gold, but what they did find was a bustling stone-aged civilisation of over one million people living in the Central Highlands.  In his later life, Mick had a large and successful cattle, dairy and poultry farm at Zenag, about halfway between Lae and Bulolo, near Mumeng. His grandson Stan still runs the operation, which produces 85% of PNG’s eggs and a large proportion of its chickens, and employs 900 local workers.