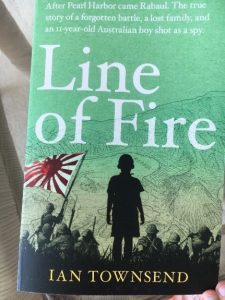 The little known and intriguing WWII story of an eleven-year-old Australian schoolboy who was shot by the Japanese in Rabaul in 1942 as a suspected spy – a compelling story of spies, volcanoes, history and war. In May 1942, in the town of Rabaul in the Australian territory of New Guinea, five Australian civilians were taken by Japanese soldiers to a pit at the base of a volcano and executed as spies. A mother, her brother, her husband and her friend. And her 11-year-old son.

Who were these people and what had led them to this terrible end, under the shadow of a volcano? Acclaimed 4th Estate author and award-winning science journalist Ian Townsend has uncovered a fascinating story that sheds new light on a largely forgotten but desperate battle fought on Australian territory. The Australian Government, unable to reinforce its small garrison, abandoned more than 1500 Australian soldiers and civilians as ‘hostages to fortune’ in the face of the irresistible Japanese advance. Set against the romantic, dramatic and ultimately tragic backdrop of Rabaul in WWII, this is a wholly intriguing narrative of Australian history, military conflict and volcanology, woven together with the story of one ordinary but doomed Australian family.

The author was interviewed on radio here:

A review appeared in the Courier Mail: Visit Article

MY Walk to Equality, a first ever collection of women’s writing from Papua New Guinea edited by Rashmii Amoah Bell, is outstanding. It is inspiring, engaging, groundbreaking and important. Given an excerpt of 80 pages to review, accounting for 14 of the more than 80 pieces in the book, I am impressed.  Through these excerpts we can smell the village fires, be astonished at the intuitiveness of these women and gasp at the ease with which they can flit between western ideology and village traditions, comfortable in both societies – yet we can also feel their patriotism and need to be valued.

This journey is explored through four key themes – relationships, self- awareness, challenging gender roles and legacy.  The courageous women who collaborated to share these diverse personal accounts open their hearts, painting vivid pictures. The content is sensitive, constructive and offers more than the title suggests. Their stories reflect an era of change whilst retaining their cultural identity.

Emma Wakpi writes with passion about her family and her country, taking the reader on powerful journeys from traditional cultural life to contemporary Papua New Guinea.

Drum beat by Vanessa Gordon pulses through the reader- the crescendo of drumbeat echoing the explosion of voices wanting, collaborating, to be heard and acknowledged.

Leila Parina’s A Paradigm Shift reflects an extraordinarily mature outlook. It is a contemporary and profound take on conciliation, traversing custom and modernity.

PNG, a country of 800 languages, speaks with a common voice and a clear message. Traditional excuses for violence against women can no longer be tolerated and the tenuous thread which persists needs cutting – its place now in literary history.

Papua New Guineans’ cultural beliefs and tradition are longstanding, important to PNG society and, in the main, deserving of our respect. All countries, Australia included, still have trailing intergenerational differences where daughters can remain unheard.  PNG women need to feel safe, with boys and girls being encouraged to grow up respecting each other. Engaging male champions on this issue is a priority. Congratulations to Australians with a PNG heart – Phil Fitzpatrick and Keith Jackson who have walked with these women. The issue is now to find more Papua New Guineans, both men and women, to share and support these endeavours, both individual and national.

This book is a significant contribution to PNG progress and history. My Walk to Equality is refreshing in its candour and written by women with informed judgement who want to make positive contributions to society based on respect and equality.  It is an easy, enjoyable read. If the rest of the book is of this calibre, it is a masterpiece.  Editor Rashmii Bell and every person who has contributed to this collection deserve congratulations. 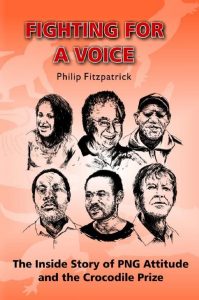 Author’s note:  For most Australians Papua New Guinea is a mysterious place somewhere north of Cape York and roughly between Bali in Indonesia and the resorts in Fiji, Vanuatu and New Caledonia in the South Pacific. As a place it sits at the bottom of their consciousness.

Papua New Guineans, on the other hand, know a lot about Australia. Many of their goods and media come from there and the big companies exploiting their resources are often Australian.

There are, however, a small band of Australians who worked or served in Papua New Guinea before independence in 1975. For these people it sits permanently and warmly in their memory and consciousness.  Many of these people belong to organisations like the Papua New Guinea Association. They follow events in Papua New Guinea through a range of publications and on social media. In the latter case one of the most influential and informed is the Keith Jackson and Friends: PNG Attitude blog.  For them and for many Papua New Guineans it is an enduring mystery why the two nations, so physically close together and with a shared history, don’t have a much stronger relationship.

That relationship as reflected on Keith’s blog is the focus of this short history. It details the attempts by Australians and Papua New Guineans to broaden and expand the relationship.

It is still a work in progress but the story of PNG Attitude and the Crocodile Prize points to what is possible when the right people get together to make things happen.

When I was asked to write the history I pondered the best approach, should it be an academic treatise looking at the phenomenon of social media in PNG and Australia and PNG Attitude’s place in that context, or should it be a rollicking yarn about the unusual characters who have inhabited its cyber pages over the years, or should it be something else?

I eventually decided on something else and that was to simply let those characters tell their own story.  As a result just about everyone and their dog gets a mention in the book and to top it off I have included the life stories of many of the most consistent contributors and commentators in a lengthy appendix.

The book begins in 2006 and traces the history of the blog and the prize right through until early this year.  It is an open-ended history, of course, because both PNG Attitude and the Crocodile Prize continue on. What the future holds is anyone’s guess.

I hope I have done the whole enterprise justice; I will be interested to see what readers think.

This is an account of the ‘discovery’, exploration, pacification and development of the Eastern, Western and Southern Highlands, Simbu and Enga Provinces of Papua New Guinea, from their beginnings to independence in Septemner 1975 – the colonial era, New Guinea was the last of the great land masses of the world to be ‘discovered’and explored by Europeans.

But this is a European conceit, for Indonesians and Asians knew of the existence of New Guinea, and had visited its shores long before the first Europeans sighted the islands in 1512.  However, this is a history of the colonial period.  A lot of fresh research into PNG Highalnds history has been conducted in recent decades, by the author and a great many others.  Sinclair has endeavoured to bring as much as possible of it together in a very detailed book, which goes far beyond sagas of exploration.  It documents the growth and development through administration, industry and all that is associated with the establishment of a growing infrastructure.

The author personally knew many of the great figures in Highlands exploration, notable Mick and Dan Leahy (he also knew Jim and Paddy), Jim Taylor, and Ivan and Claude Champion.  They have all passed on, but not before telling Jim Sinclair their stories of ‘discovery’.

The epic World War II story of Australia’s 75 Squadron – and the 44 days when these brave and barely trained pilots fought alone against the Japanese.

Assessing Food Needs Following a Natural Disaster in Papua New Guinea by Matthew Kanua, Mike Bourke, Brendan Jinks and Michael Lowe, with the support of the Church Partnership Program, Australian Government Department of Foreign Affairs and Trade and the Adventist Development and Relief Agency. 2016 ANU Research Publications.  Can be downloaded free of charge from http://hdl.handle.net/1885/109282

Papua New Guinea is vulnerable to natural disasters, including drought and frost associated with El Niño weather events and excessive rainfall associated with La Niña events. Drought, frost and excessive rainfall can cause major disruptions to village food supplies. Drought also reduces villagers’ access to clean drinking water, which in turn has a negative impact on peoples’ health and the capacity of schools and hospitals to operate. There are often other impacts — damage to crops and property by wildfires, out-migration and an increased death rate.

In 1997–98, and again in 2015–16, a major El Niño event caused significant disruption to drinking water and food supply for many Papua New Guinean villagers. Staff of many agencies, including those working through the Church Partnership Program El Niño Drought Response Program, were involved in assessing the impact and providing relief in 2015–16. This publication brings together the experiences of those working on the Church Partnership Program response to the 2015–16 El Niño event and serves as a guide for assessing future food shortages and to help those in need.