The 1963 Fitzer patrol of the Star Mountains of PNG, the first of its kind into that high, wild country, is well documented.  But for a graphic description of the incredible hardships faced by the patrol you need to read the day by day diary of surveyor John Groenewald. In nearly five months, John reckoned the patrol walked some 500 miles and he should know. Walked?  More specifically waded through mud and rivers, slipped from rocks and logs, scaled impossible cliffs, crossed swift-flowing rivers, sweated in the swamplands, shivered at daytime highs of 640 in rain and drizzle and froze in camps at altitudes of 8,700 ft. And these hardships were second to the concern about where the next meal was coming from.

A South African, John was attracted to work with the Snowy Mountains Authority where he learnt to use the Wild T4 theodolite.  This skill was a prerequisite for the PNG patrol and he accepted the Department of National Mapping challenge, making his first unforgettable visit to PNG in January 1963.  His task was to prepare a rough track map using compass bearings and estimates of the distance they covered and to make astronomical position line fixes. The fix sites had to be marked for subsequent aerial photography in order to ascertain the geographical data. In his words “this was all very well in theory but astronomical observations were virtually impossible” since they were either shrouded in cloud or enveloped by jungle. He managed only 13 fixes over the whole patrol.

Led by DO Des Fitzer, with ADO Ross Henderson and Groenewald, a small group of police and around 60 carriers, the patrol set off on January 17 from Kiunga on the Fly River. Having previously identified from aerial reconnaissance the “top pocket” near Mt Capella as their ultimate target, the route took them along barely identifiable tracks that led from swampy, leech-plagued low country into the craggy, cloudy, precipitous mountains that span PNG and West Irian (now Papua).

Walking up to seven hours a day, at times they strayed at times across the border into West Irian, always seeking a route to the “top pocket”.  They built bridges and contrived ladders to scale sheer bluffs. They fought off bees and mosquitoes, they nursed blisters, they were always damp and dirty and regularly drenched. John struggled with observations and maps in impossible conditions and they encountered villagers who almost certainly had never seen a white man and who, John observed, wore little and looked “rather wild”. They also had moments of sheer delight at the unfolding magnificence of the country they were struggling through, of jumping into crystal clear pools and cleaning up and even, on rare occasions, sunbaking at their camp.

Food was the constant worry; when supplies could no longer be conveyed by river, the higher they went the more difficult it became to find suitable sites for airdrops. Despite the comings and goings of the carriers there were always many hungry mouths to feed and their progress depended entirely on food – when it was scarce they had to wait at the best available site for a drop until it came and when it arrived they could walk only as far as the carriers could progress with their new loads of rice and bully beef. More than once they could hear a plane searching for them and the disappointment was extreme when they realised it had given up trying to find them. On other occasions, the daring of the pilots flying in at treetop level left them stunned. Often they were able to buy food at the various villages they passed through, largely taro and now and again a pig. They traded with match boxes and small beads.

The three of them devised cunning ways to disguise the “boy’s meat” they inevitably had to fall back on but John wrote that on occasion he felt weakened by hunger as they got further into the mountains. At one stage the food position became so critical the decision was made to turn back just as a drop succeeded with a load of rice and bully beef, a few welcome treats like frozen steak and much sought-after mail.

Des and John were dismayed when, on March 13, Ross was summoned back to Kiunga to present as a witness in a murder case. This was disappointing as the three of them got on well and it was unlikely he would return in time to complete the patrol. He was to be replaced by Dan Claason who failed to materialise. So it was just the pair of them that pressed their party on and ever up.

At several villages they were told there was no track to the “top pocket” but Fitzer decided this merely showed a reluctance to guide them into difficult country and they struggled on. It was slow, slow going. But they eventually proved Fitzer right when, near the foot of Mt Capella, they found a group willing to show them the way. By then they were becoming critically short of food again and were devastated by a radio message from Daru to say if they attempted their goal no airdrop could be guaranteed. John describes Fitzer’s anger and determination to continue regardless. They had come so far!  But the terrain was dreadful and it became necessary to hack their way through jungle, at times crawling on hands and knees and at one point wading 200 yards up an icy stream. The terrain, the state of the carriers and lack of food defeated them. The party turned back and finally met up with Dan Claason before heading for Telefomin. John observed their descent into a broad grassy valley on the other side of the “Stars” by writing “It is just unbelievable that two sides of a mountain can be so different.”

Overwhelmed by the hospitality offered at tiny Telefomin, scene of the murder of two kiaps only 10 years before, they ate, drank and partied hard, somewhat embarrassed about the tattered state of their clothing.  Ross rejoined them at Telefomin but no sooner had he arrived than he was ordered to take the remnants of the patrol back to Kiunga while Des and John were to wait at Telefomin for the arrival of the Governor-General. Then John would return to Australia and Des was to fly to Daru.  The arrangement was frustrating but Des and John filled in time awaiting the G.G. by joining a short medical patrol into the Oliptamin Valley. Back at Telefomin, the big moment finally arrived and the pair was introduced to the G.G. about whom John noted “he seems quite nice but of course very English”.

The kiaps were not happy about the tame conclusion to their heroic patrol which was supposed to be a Kiunga to Kiunga round-trip on foot. It seemed cruel now the hard part was behind them but as it turned out only Des suffered the ignominy.

“The best laid plans Of Mice and Men” wrote John, whose belongings were already on their way south via Moresby when Natmap decided he was to return to Kiunga with Ross, taking astrofixes on the way. The pair, with their police and carriers, left the comfort of Telefomin on April 22 and soon crossed back into Papua. The track they followed was a considerable improvement on their earlier struggles and main points of interest were checking out potential airstrip sites, taking astrofixes whenever possible, mapping and calculating and contending with the Pnyang river, a tributary of the Ok Tedi, which at that time was known as the Alice. One of their two crossings of the Pnyang was by way of a cane suspension bridge, 200 ft long and anchored at each end by large trees. Not having previously experienced this novelty, John confessed that the shaky, swaying contraption was thoroughly unnerving and he was amazed he reached the other bank. The second time they had to cross the same crocodile infested river they had planned on making a raft when a policeman decided to swim across while the others watched in trepidation. He made it safely and hijacked a canoe so they abandoned the raft but John noted that conveying the whole party across this swift-flowing river in a small canoe was a slow and nerve-wracking process. 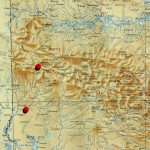 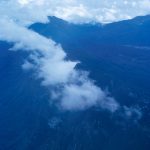 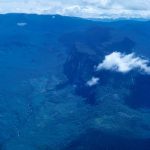 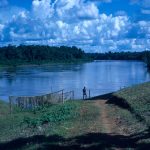 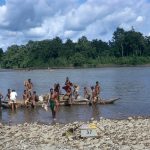 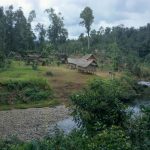 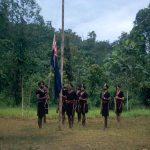 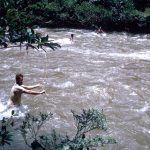 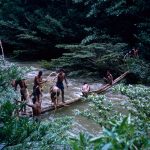 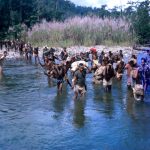 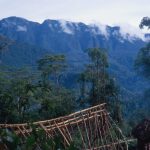 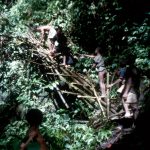 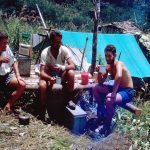 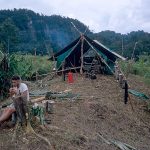 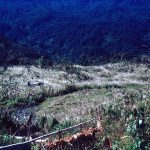 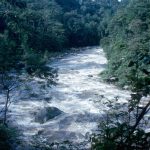 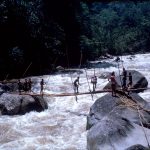 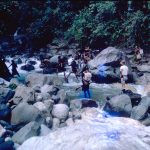 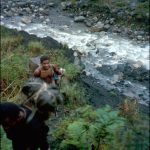 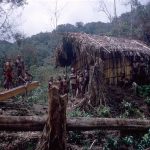 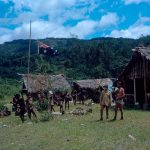 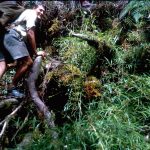 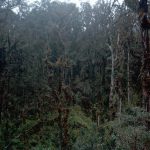 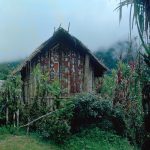 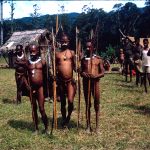 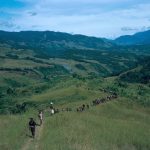 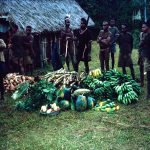 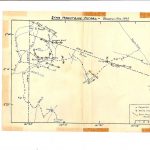 As the walking became easier they pushed themselves harder walking often seven and eight hours a day. By the end of May they had left the mountains behind and it was not only getting a lot warmer but becoming popular with binetangs. John was bitten all over and wrote that he was getting heartily sick of the discomforts. Now they encountered regularly patrolled villages and, instead of camping, found kiap rest houses where they could stay along the way.

At last, sore of foot in boots with paper-thin soles, sweaty and dirty and beset by festering sores, they struggled through the flat swamp country and arrived back at Kiunga on June 7, 152 days after they left it. Their arrival was acclaimed, their achievement had been recognised by the Governor-General and in the press and there was profound satisfaction in knowing what they had survived despite the frustration of not reaching the “top pocket”. Happy to be idle for a few days and soaking up a cold beer or two before flying out, John was the only one of the three expatriates to complete the entire patrol. He later observed “the Star Mountains Patrol was one of the most exciting and memorable experiences of my life”.