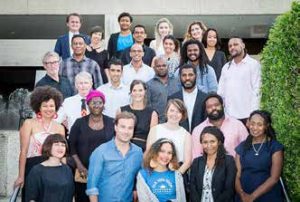 Held in November, the Dialogue brought together 20 young leaders from both countries to share ideas on important national issues for Papua New Guinea and Australia. The Dialogue was held in Brisbane, Australia and saw participants from a broad range of backgrounds including law, government, civic society, health, education, media, academia and the arts. The art sector was particularly prevalent; the Dialogue coincided with the “No 1. Neighbour” exhibition at Queensland Art Gallery, showcasing work by artists from Papua New Guinea from the mid- 1960s until today. The exhibition demonstrated the importance of the ongoing relationship between Australia and Papua New Guinea with projects profiling creative relationships between communities and individuals.

Unfortunately, my participation in the Dialogue could only be described as bitter sweet. Bitter because it occurred on the day after my grandfather, Lawrence (Lon) Tomlinson, passed away (see Obituaries). Lon, who spent a considerable portion of his working life in the Territory of Papua and New Guinea (as it then was), had turned 100 a few days earlier.

And sweet because I believe Lon would have been incredibly heartened by the valuable work being carried out by many of the participants, especially the PNG contingent.

While there was plenty of conversation throughout the week of the Dialogue, it was not merely a ‘talk fest’. Participants developed a number of proposals to grow links between the two countries and expand understanding of Papua New Guinea in Australia. These included:

In an age where media has at times been driven by negative stereotypes around the PNG-Australia relationship, the Dialogue was a positive reminder that there are so many emerging leaders acting as powerful agents for democracy, peace and social and economic progress.

For those interested in learning more about the Dialogue visit: https://auspng.lowyinstitute.org/
Sebastian De Brennan