In March 1953, a contingent of Royal Papua and New Guinea Constabulary was chosen to attend Queen Elizabeth II’s Coronation Parade in London.

Approval for the attendance of representatives of the RPNGC was not straightforward. Despite a request from the Commissioner, JS Grimshaw to the TP&NG Government, approval was not initially granted and the RPNGC was not part of the original Australian Services Contingent that was due to leave Sydney on HMAS Sydney in April 1953.

It was only after the intervention of the Prime Minister Robert Menzies, at the urging of his Minister for Territories Paul Hasluck, to the Coronation Commission in London that approval was ultimately forthcoming.

The RPNGC contingent was away for about 12 weeks, departing Port Moresby on the MV Sinkiang at Easter, Thursday 2nd April 1953, and arrived in Sydney on the 9th. There was controversy about their travel arrangements as the Australian Navy refused to allow them to accompany the rest of the Australian Coronation Contingent on HMAS Sydney. It was feared that they would miss their connection, as their UK-bound ship was due to sail on the 9th, but the departure was delayed and they sailed out from Sydney at 6am on 11th April on the New Australia and arrived at Southampton on 9th May.

While in Sydney before their departure, the contingent marched through the city from Circular Quay to the Cenotaph in Martin Place to lay a wreath.

Hundreds of people lined the route from the approaches to Martin Place as the platoon of 24 men (sic), led by the Eastern Command band, approached the Cenotaph, where several thousand waited.

Office-workers watched from most windows surrounding the Cenotaph, and dozens of girls stood precariously on window parapets.

They carried rifles with bayonets.

Marching with fine precision, they arrived at the Cenotaph and there was a loud clap of sandled feet as the platoon halted.

The above photo was taken in London on 2nd June 1953. Inspector Bill Burns (front row, right column), and to his left, the other officers are Sub-Inspector Broman, and Inspector Sandy Sinclair, ex-Scots Guards. They are waiting to march at Birdcage Walk, near Buckingham Palace.

All these PNG men were handpicked decorated World War II veterans. They had never left their country before, and most were illiterate. The tall PNG man is Sgt-Major Kari (Second row, left column) from Manus Island. He was a famous war hero who spent much time protecting Coastwatchers behind Japanese lines. He saved numerous Australian soldiers’ lives, and “eliminated” many Japanese along the way.1

The other two are Sgt-Major Saura (second row, left column) from the Waria River in the Morobe District, a famous recruiting area for the toughest PNG police, and Sgt-Major Sairere (second row, centre) from Aitape on the north coast of PNG. The tall man in the second row is Corporal Auwai from Markham River country near Lae.

The grizzled old veteran Sgt Major Merire, for whom his Australian officers had great respect, was also a famous war hero. He came from Gomema village in the Markham Valley near Lae. When the Japanese landed in Madang in 1942 he moved all the residents with their supplies into the jungle to avoid capture. His coast watching exploits along the coast as far as Finschhafen helped guide US bombing raids on Japanese positions. He was repeatedly captured and escaped, always with new information which he was able to pass on to the Australian troops, for whom he was a valuable guide when they recaptured the island. For his efforts he was awarded the British Empire Medal, visible at the centre of his chest in the photo below, next to his War Service Medals. In 1952 he was featured on a stamp of Papua New Guinea. 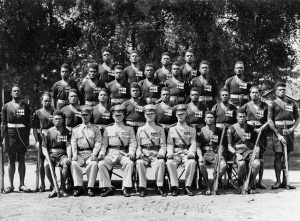 These PNG men were not to be trifled with, as some Arab souvenir merchants found out to their cost in Aden when they tried to rip off some of the men whilst en route via ship to the UK!

The PNG men had tribulations with the jolly English summer weather…they were freezing and in drizzling rain all day – hence the groundsheets used as raincoats. There were big problems with their footwear. The English sandals which had been pre ordered from PNG were all too small for the PNG-style feet. Their new sandals had to be urgently specially made at the last minute – extra wide! The men would have much preferred bare feet, New Guinea style! After marching around London all day in these brand-new sandals their feet were cold and blistered. Some men were bed-ridden for days afterwards. Note their flimsy tropical clothing compared with the English spectators. Despite wearing woollen underclothes, most caught colds.

The contingent attended a reception at Buckingham Palace for the Commonwealth Forces and received the Coronation Medal from the Queen. They were invited to the Trooping the Colour Parade at Horseguards and also to the Fleet Review at Spithead, where they were on board HMAS Sydney. The contingent was inspected by HRH the Duke of Edinburgh at Pirbright Guards Depot in Surrey. Prior to the Coronation Day Parade they were camped in Kensington Gardens and were invited to many other forms of entertainment such as a visit to the British War Museum, Windsor Castle, an RAF training centre to see Air Force guard dogs being trained, the British and Commonwealth Museum in Kensington, sightseeing in London and visits to many English counties such as Hampshire, Surrey, Sussex and others. 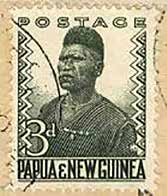 They also visited the Austin Motor Works in Birmingham, attended parades at White City and visited the Bishop of London’s Palace (Bishop Wand). Whilst there the contingent gave a drill display under SM Christian on the Palace lawn for him and other visitors who were present. They witnessed the changing the guard at Buckingham Palace which was being carried out by the Australian Army. Also present that day were the Prime Minister of Australia, Robert Menzies and Mrs Menzies, and Lt-General Sir Edmond Herring.

Rev Father Bodger visited the contingent in camp and addressed them in their own language (Binandere, Wedauan and Wanigela – three distinct Papuan languages2), much to the astonishment of other Colonial troops and newspaper representatives. He had been a Missionary in Papua.

The standard of drill of this group was amazingly high, and drew much comment and compliments from many other groups, especially the Brigade of Guards. They had practised every day well before leaving PNG via Sydney, Perth and Aden, at least twice a day on the ship. In England, the Australian contingent’s officers actually asked if they could practise with the PNG contingent in the days leading up to the big Parade, so they could sharpen themselves up. The Australians, and many others, were embarrassed to be outshone by the ‘natives’. Other contingents would often come to watch the PNG men at their drill practice at Pirbright Barracks in the weeks leading up to the big day.

They returned to Australia by air arriving in Sydney on 21st June on a BOAC Super Constellation, a trip taking four days with overnights in Beirut and Singapore, where they stayed at Raffles Hotel. They were on the ground in England for 40 days – from 9th May until 18th June.

They spent several days in Sydney on their return, which included a visit to Government House, where they were inspected by the Governor, Sir John Northcote, and were given morning tea. They left Sydney to return to Port Moresby on 26th June on the MV Shansi.

Sgt Major John Guise was the senior PNG officer in the contingent and acted as interpreter in many of the dealings that the men had with the public and with other servicemen both in Australia and the UK. The grandson of an English adventurer, who came to Papua in 1880 and married a local woman, Guise was to become the first Governor-General of Papua New Guinea.