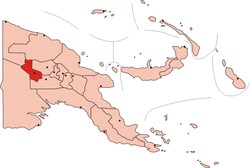 This is an attempt to write a tribute to a legend, an idol, a visionary, yet one of the most unique humble Yuna men who ever lived. In so doing we ask that ‘Sir’ Pendepa Hera’s dear wife and widow Eleta Ekepi Hera; his children namely Joseph, Alice, Aggie and others; his siblings George Hera and others; his wider extended family; and many friends and colleagues throughout Papua New Guinea and abroad may forgive us for this brief tribute to your dearly loved and our admired humble father, grandfather, uncle, leader and icon. 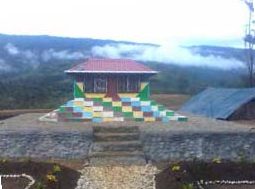 We feel a sense of awe in saluting the late ‘Sir’ Pendepa Hera. Sir Hera was before my time. I only met him briefly as a child and again had the opportuniity to know him further when he lived with our then family in Port Moresby from 2005-2007. I can clearly remember meeting him for the first time on a certain day in January of 1982 when I was a 7 year old, short stunted little girl at Kamenda village at the border of North Koroba and Lake Kopiago Local Level Government Jurisdictions of the Lake Kopiago Koroba district electorate of the new Hela Province.

Papua New Guinea became an independent country on the 16th September 1975 from Australian colonial rule. Established as a Westminster democratic system of governance where national elections run every five years, the first election occurred in July of 1977 1. Sir Hera contested the Lake Kopiago Koroba electorate and then and again in 1982. Sir Hera however came only second in both elections. The Lake Kopiago Koroba people didn’t vote him into parliament to represent them. Being from the Wagiye village in the North Koroba Local Level Government, he could speak both the Yuna and the Huli languages. So he knew customs, traditions and practices of both language and tribal groups. Sir Hera was a qualified teacher himself. 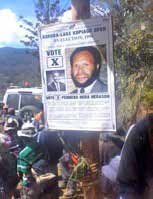 Campaign banner at a rally in 1982

The Lake Kopiago Koroba electorate is one of the three electorates in the new Hela Province approved by the national government in 2012. The electorate is home to over 70’000 population which is the most heavily populated amongst the Tari Pori and Komo Magarima district electorates 2. Lake Kopiago Koroba electorate shares its borders with the Western and Sepik Provinces, not geographically far from the West Papua and Iran Jaya borders. Located towards the Western end of the province, the Yuna and the Huli tribes that occupy this vast land have been isolated from mainstream development and the outside world for many generations.

The Koroba district being closer to Tari, the provincial headquarters is more advanced in terms of roads, bridges, telecommunication services, health facilities and school infrastructure. I remember my people walking to Koroba station for celebrations or humble shopping expeditions. On the other hand, villages in the Lake Kopiago district remain isolated from all basic social services and infrastructure to this day. There are no economic activities, primary schools are dysfunctional with lack of resources and trained teachers, women give birth in caves and bushes and living conditions are poor 3. 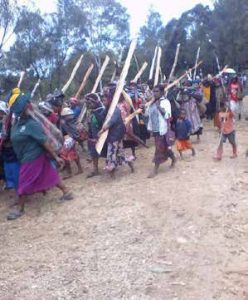 Community rallying for a funeral feast after ‘Sir’ Hera’s burial.

In 1982, at the age of seven, I, along with forty other students from my village Pakura and other nearby villages saw a light for the first time. We could enrol and go to a school. The then Haredege Primary School was opened by ‘Sir’ Pendepa Hera when he was yet again campaigning for the second time in the national elections only to come second again. Our parents and their parents never had opportunity to get an education. That group that completed year six in 1987 were the chosen ones to bring light to their community, because the school got shut down since then to this day.

Although Sir Hera’s people did not vote him into parliament, he had a vision. That vision was an important one. It was not to make his people rich or build town houses or build bridges or businesses. Sir Hera knew that in order to achieve all of these one had to be educated. Educated with knowledge and information. The art and science of understanding one’s own situation and dream of a positive, a better, future.

Sir Hera believed in education as freedom, liberation, and development which the school was going to bring to this primitive tribe. As Paolo Freire famously said, ‘give education and liberate a person to contribute to society’ 4. To salute Pendepa Hera ‘Sir’ is fitting for the legacy he has left since his passing a few days ago.

Haredege Primary School has produced some of the finest elites now contributing to the development of Yuna, Hela and PNG in many different fields and roles. On behalf of Stanley Newe, an electrical engineer working in Australia, Priscilla Waya with Masters in Education working as a lecturer at University of Goroka, Ariba Male with Masters in Education now a High School Principal and myself a nurse doing PHD in Australia, to name a few, I cannot thank you, Sir Hera, enough. If it wasn’t for you, your humble vision for education, we would not have come anywhere this far.

Haredege Primary School has been closed since the first batch of year six students passed out in 1987. The Haredege people needed information to vote ‘Sir’ Hera into parliament so the seed could be groomed. Sadly, our people needed to be less ignorant. But ‘Sir’ Hera didn’t fight for fame, popularity, power, wealth or prestige. ‘Sir’ Hera, all his life since then, lived in decency, humility and humanity. He was natural leader. He didn’t seek praise, nor recognition, nor reward. All of Yuna learnt how to be a truly humble leader and a truly genuine Yuna from this man. Most times his decency and rare unique humanity have been taken for granted. This didn’t discourage him. He truly was educated. Educated with the richness of our Yuna culture and heritage. Educated with the heart for a better Yuna. Educated to vision a dream for his children and their children. And educated for Yuna to see the brighter and bigger light of which he saw a glimpse. Only he, ‘Sir’ Hera could have seen because he was ready, was wise and truly genuine.

We are still shocked by his too soon passing. In farewelling ‘Sir’ Hera to your final resting place, your legacy, Haredege Primary School will live on. We the pioneers will hold hands and walk together to empower our people and set the standard of our school to a best learning space it can be for our young generation. Although as humble as you were, you wouldn’t take compliments, I assure you can be very proud that the smallest seed you have shown is the best and only thing you did with your capacity. And that was all that was needed to be done with the biggest impact for many more years to come. May your kindred soul rest in eternal peace.