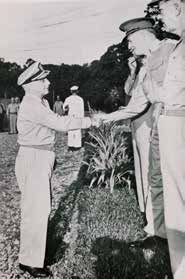 The following is a sequel to the ‘How Australian Coastwatchers turned
the tide of the Pacific War’ article printed in the December edition of
Una Voce, in which it was told ‘the Japanese invasive successes were
brought to a shuddering halt due to two Coastwatchers, who reported
the impending fleet of the Japanese invasion force, which precipitated
the Battle of the Coral Sea in early May 1942 and aborted the invasion
of Port Moresby.
In his book, WAR AT THE END OF THE WORLD, James Duffy,
accredited US historian, had recorded, ‘an Australian Coastwatcher
on the Solomon island of Bougainville provided the first news of
Japanese movements when he sent his message on 2 May 1942
that a large force of enemy ships was sailing south towards Tulagi. A
second, similar despatch was made later the same day by another
Coastwatcher on New Georgia. Both Coastwatchers transmitted their
sightings to headquarters at Port Moresby which relayed the message.’
Herewith is the identity of those two Coastwatchers: 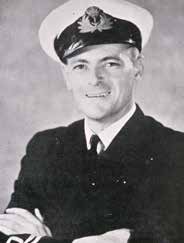 Firstly, the Australian Coastwatcher on the Solomon island of
Bougainville was District Officer R.A.N. Lieutenant Jack
Read, (as recorded by Philip Selth OAM, author of his proposed
biography) ‘who sent the signal early on 3 May 1942. He had
been told of the enemy ships anchored in Queen Carola Harbor by
Lieutenant J.M. Mackie the previous day.’ This is also confirmed by
R.A.N.Commander Eric Feldt’s book,The Coast Watchers (p.131)
…but it was not until early on the morning of 3 May that the clouds
cleared ‘just long enough’ for Read to ‘spot the vessels preparing to
put to sea’ and he ‘immediately sent a message to that effect’.
Read was awarded the DSC (Distinguished Service Cross -US) for
his services. 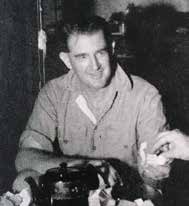 The second Coastwatcher mentioned by Duffy ‘…another
Coastwatcher on New Georgia‘ was Major D.G .Kennedy, a New
Zealander of the British Solomon Islands Protectorate Defence
Force, when he was at Segi – New Georgia’ (Ref: Feldt’s book
p.110), and then … ‘On the 1st May 1942 (p.108) and then … ‘Next
day Kennedy (i.e. 2nd May 1942) reported two ships at anchor in
Thousand Ships Bay at Isobel sixty miles away (p.109).‘ and then…
’The intelligence that Japanese ships were in Thousand Ships Bay
had been passed to the US Naval Forces…etc’ and then… ‘the
carriers hurried off to meet and defeat the forces moving to attack
Port Moresby at the Battle of the Coral Sea…etc’
Kennedy was awarded the DSO (Distinguished Service Order) for his
services.