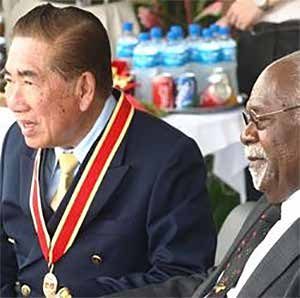 Sir Henry Chow, born 1933 Rabaul, was patriarch of the Chow family – a long-established and respected line, whose roots in Papua New Guinea go back to the latter part of the nineteenth century. Sir Henry, was educated in Rabaul and Australia, After World War II he served an apprenticeship and trained as a boat designer and builder in Australia.

The Chow family’s forefathers were peasant farmers of Guangdong Province in southern China. In 1895, the colonial government of German New Guinea recruited a family member as a personal servant for one of its administration officers and the young man arrived in Rabaul to be soon followed by two younger brothers. Over time, the family became part of the history and development of East New Britain and New Ireland and now has its sixth generation in PNG. Members of each generation have been active in community affairs and contributed much to the development and advancement of the areas where they lived.

Sir Henry married in Australia and returned to Rabaul in 1958, establishing the Toboi Shipbuilding Company. The business grew quickly, expanded and prospered. Starting with eight local employees in 1958, over the next 14 years the  company built 170 vessels and increased its workforce to 120. During that period, Sir Henry formed a joint venture with the Kambara Kisen (Shipping) Company to build steel ships for the coastal trade in PNG and the South Pacific. But after building six vessels, the venture collapsed in 1971 due to lack of orders for steel ships.

In 1972 the shipbuilding side of the business was phased out but the Toboi Shipbuilding Company is still active in providing services to the coastal shipping industry and the fishing industry. These days Sir Henry’s family owns, operates and manages a number of successful businesses in the major centres of PNG including shipping, engineering and machining, biscuit manufacture, smallgoods, fast food restaurants, real estate and plantations, fishing, and logging and sawmilling. The business group employs 1,200 people.

Sir Henry was one of the most generous philanthropists in PNG, his companies contributing to 26 sporting clubs, many churches and giving generously to charitable organisations that assist people in need. From a young age, he showed a keen interest in politics. In 1962, aged 29, he was elected vice-president of Rabaul Chamber of Commerce. In 1964 he became a member of Rabaul Town Council, being elected Chairman in 1970, he served four years in the position. From 1970-75 he was national secretary of the PNG Local Government .

At the same time, Sir Henry was beginning to make waves in national politics, although he never sought elected office. He was a senior executive officer of the Peoples’ Progress Party (PPP) for 17 years from 1967-84 and was its national coordinator in three elections – 1972, 1977 and 1984.

Three of Sir Henry’s sons manage his many business enterprises. Adrian Bernard Chow, Fabian Clement Chow and Ian Andrew Chow are all hands-on managers with many years of experience between them.

For his long service to the people of PNG, Sir Henry was made an Officer of the British Empire (OBE) on Independence Day 1975 and on 1 January in the millennium year, 2000, he was promoted to Knight Bachelor. Just two years ago, in an address to the PNG Association of Australia, Sir Henry said “the people of Papua New Guinea are looking forward to the day when they will have good government leaders who will manage their wealth wisely and deliver the services they so desperately need to improve the life for themselves and their children.” It would be Sir Henry’s outstanding legacy if these words could be honoured by the political leaders of PNG.

UV: Sir Henry addressed the PNGAA Christmas lunch in December 2015 and an excerpt from his speech is here: https://pngaa.org/blog/2015/09/16/speech-to-pngaa-christmas-lunch-2015-sir-henry-f-chow-kt-obe/