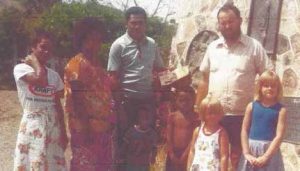 Tom was born in Leeton, New South Wales the eldest of three children, spending his early years in Yanco where his father was the licensee of the Yanco Hotel.  The family then moved to Sydney where Tom attended Primary School followed by Manly Boys High School, where he gained his Intermediate and Leaving Certificates.

After leaving school he worked as an Advertising Assistant for Associated Newspapers and at Atlantic Oil and the Commonwealth Public Service as a Taxation Clerk. Then in July 1955 he applied for a position as Cadet Patrol Officer in Papua New Guinea and on the 6th February 1956 he joined the Department of Native Affairs; his first posting was Balimo Sub-District in the Western District. This is also where he met the Kleckhams who were to become friends. Betty Foster(nee Kleckham) has been visiting Bessie recently in Scotland. 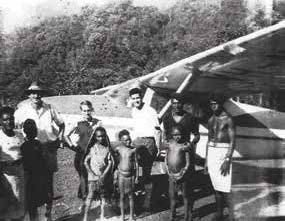 Building the airstrip with
manual labour at Kaintiba.

He carried out patrols in the Aramia, Gogodara and Gaima River areas. Tom relayed many memories such as coming face to face with a monitor lizard in the rain forest which gave him quite a fright and travelling up the Fly River on a Government work boat with a German entomologist.

To the north of Balimo was Mount Bosavi an unpopulated area so it was rarely patrolled; but where some fifty years later the BBC made an exciting Documentary on the wildlife, flora and fauna in the region. Tom remembered a lot about this area and the programme brought it all back to life. 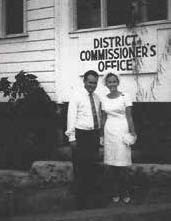 Tom attended the long course at ASOPA (Australian School of Pacific Administration) in 1958. Whilst there, he was involved in the publication of the magazine “Tok Tok”.  All his life he had an interest in writing articles and drawing, especially maps and cartoons. There was a short interruption to the course whilst he had his appendix removed.

In March 1959 he was posted to the Western Highlands to Tambul in the Mount Hagen Sub-District, where he was involved in Census and General Administration work. Whilst stationed at Tambul he worked with P.W.D. and the Komio people in the  hacking out of a route through the Highlands Moss Forest along the side of Mount Giluwe  [13,400 feet high] at elevations of over nine thousand feet. One friend commented that he had seven blankets on his bed whilst stationed at Tambul. The house he lived in was made from local materials and one day it burnt down, he did however save his cat, typewriter and a tea chest of papers. 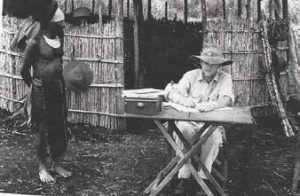 Tom helped with the hauling and manhandling with ropes, three of the land rovers that were slipping in the rain and steep boggy gradients on the rough corduroy track, mainly consisting of logs laid across wet ground to Minabel and then along a made road to Mendi. Part of the road that was from Lae by way of Kainantu, Goroko, Kundiawa and Mount Hagen. Some sixteen years later he took his family by road from Lae along the Highlands Highway to Goroko and Mount Hagen in the comfort of a car; experiencing only the inconvenience of a swarm of locust which they encountered at the start of their journey. 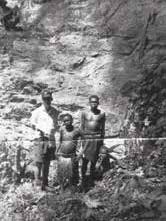 After spending time in Mount Hagen, Tom transferred to the Morobe District. He served at Pindiu on Census patrols and patrols for the collection of Head Tax. Here he carried out his first election patrol for the election of councillors to represent the Dedua wards.

After leave he was sent from Port Moresby to Kerema to accompany Assistant District Officer (ADO) Arthur Carey who in August 1961 was leading a patrol to investigate the reported massacre at the Kukukuku hamlet of Yaba. This patrol was to meet up with a patrol led by ADO Hastings accompanied by Cadet Patrol Officer (CPO) Joe Hicks from Menyama. The upper Tauri was difficult terrain and Tom was involved in bringing up supplies, organising carriers, manning the radio whilst ADOCarey reconnoitred ahead.  Additional supplies to refurbish the patrols were dropped at a site between Yabba and Hauwabanga [the present site of the Kaintiba airstrip] by a TAA Douglas DC3 from Lae.  Before the joint patrols withdrew it was decided that a government station would be set up in this area 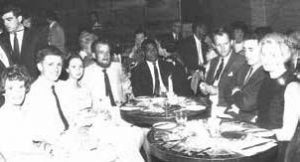 Tom stayed around the Gemantua and Wiani creek area whilst the police investigated suspects and witnesses. They recruited additional carriers and then crossed over the range [6,175 feet] to descend into the Uyei valley and on to Hauwabanga [5,200feet].

At this point the patrol personnel numbered two hundred.  Tom left Hauwabanga with CPO Hicks to go to Menyama for supplies before returning to escort the thirty prisoners to Kerema. The Tauri River was in flood and an immediate crossing was impossible. The patrol took twelve days to reach the start of the coastal plain to Mamuro. Small outrigger canoes ferried most of the patrol down the creek to Mamuro where the Administration launch MV TNG, together with the local council outboard-driven double canoe had arrived, and was waiting for the patrol. This was the first time most of these Kukukukus had seen the sea and boats and two had to be picked up and carried on to the launch due to fear. 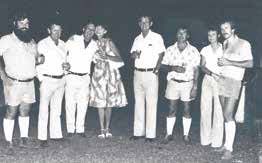 Fergus Anderson had walked up from Kerema to take over Kaintiba which was tentatively selected as the site being mid-way between Yaba and Hauwabanga. Sadly he was drowned crossing the Tauri River.

Tom was advised that he was to be the Officer in Charge of Kaintiba.  In November 1961 he returned there. Tony Heriot was already there working on the construction of the air strip by locally recruited Kukukuku labourers. The work was done with picks and shovels. The site was supplied by carriers from Kerema and Menyama and by air drops. Tony Heriot practiced his javelin throwing on the emerging airstrip; he was later to compete in the Commonwealth Games.

When they felt the air strip was suitable for a small Cessna type aircraft to make a first landing an officer from the Civil Aviation Department together with a Civil Engineer made a short visual appraisal of the strip. The pilot commented “This would be the worst strip in PNG”. The Civil Engineer replied “No, it’s not the worst in PNG but the whole world!” 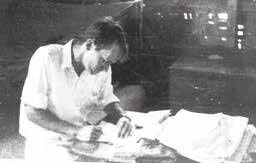 Whilst digging the airstrip a small ancient stone pestle and mortar was uncovered. This was taken by Senta Taft; who had come in to Kaintiba on a flying visit, hopefully, it went to a museum which is what Tom would have wished for.

At this time Father Fournier a Swiss Catholic Missionary was establishing a mission close to the Government Station at Kaintiba.   Tom’s days in the bush were relieved by all the reading matter sent to him by his father and a friend Robbie Robinson from Angus and Robinson the Book Publishers in Sydney. 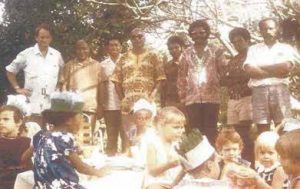 Maslyn Williams who produced films for the Commonwealth Film Unit paid a visit to Kiantiba, he later wrote a book “Stone Age Island” in which he included details of the Yaba massacre. Tom manned the station alone for several months until he went on leave at the end of 1963.

It was whilst he was on leave in Sydney that he met his future wife, Bessie; she had taught with his sister Barbara and she lived at Queenscliff with Heather. They were having dinner one evening at the Newport Hotel and Tom went along too. It was during this time that Tom introduced Bob Fayle, who was down on leave, to Heather.

As with his earlier appendectomy Tom’s work was interrupted by an operation.

Whilst on leave as a result of a routine chest x ray for TB a heart defect was found.  Tom was operated on at St. Vincent’s Hospital, Sydney in March 1964. He was unable to return immediately to PNG and was seconded to the Department of Territories in Sydney where he took visiting Papuan and Guineans to see the sights and places of employment in Sydney. He fully embraced city life and caught up on theatre, films and seeing friends.