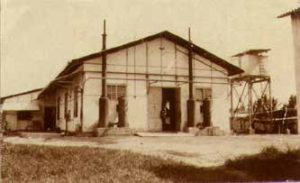 Today mobile phones, email and internet, make it easy to forget that for almost the first 100 years of New Ireland’s development from the earliest colonial days, it was accomplished without any form of rapid or instant communication.

From about 1880, when the first traders were living in the Kavieng area, to December 1916 the fastest communications to Rabaul and the world beyond, was a written letter, taken by the next available ship, and the reply, once written, was by ship back to Kavieng from wherever the destination of your original correspondence was.

So, weather and shipping schedules permitting, a fast reply from Rabaul might be one week, Australia 6–8 weeks, and Europe 3 months. So planning ahead was obviously essential, and on the spot knowledge and decision making necessary, based on experience.

This began to change in New Ireland a century ago in December 1916, no doubt as a consequence of the 1914–18 war and the military occupation, by Australia, of German New Guinea, plus the fact that a major wireless communication centre, with three masts 384, 280 and 155 feet high, was completed and open for traffic at Bitapaka, near Kokopo in September 1916, call signal VJZ, having been commenced by the German administration and Australia using the equipment found there at Bitapaka.

In December 1916 the Kavieng wireless station first went ‘on air’, operating a 5 KW unit with the call sign VJY. It was initially operated by the Australian Navy contingent of the Australian Naval & Military Expeditionary Force (AN & MEF) administering German New Guinea, to keep track of all shipping activities in the area and also to open up communications for the former German territory. It was one of several stations built at Woodlark Island, Madang VIV, Morobe VZK, Kieta VIU, and later Salamaua, Wau and Bulolo. It operated out of quite a substantial building on the east (inland) side of what is now Tabar Terrace, near the junction with Kawok Street, and was called ‘Haus Toktok’, and the messages mainly went via Woodlark, for onward transmission to Australia, and Rabaul.

Nearby, towards town, was the grave of the infant Gustav Hoffmann, died 30th August 1911, son of the German doctor William Hoffmann in Kavieng. He was buried there, in what were then the very beautiful botanical gardens at the rear of Boluminski’s house.

In those early days the communications were 100% by Morse code, no speech. It required a trained skilled operator able to hear and accurately ‘read’ the dots and dashes being received in sequences over a long distance, frequently through much ‘static’ noise and/or weak signals. Then accurately type the telegram messages that were received – for delivery by the messenger or Telegram Boy – and also be able to send messages accurately at high speed, from the handwritten messages received for transmission from the Administration and private business, often in a coded form and/or of a highly confidential nature. The first teleradio using speech was opened in Rabaul in 1935.

During the period of the First World War, and the Military administration, that lasted until the 9th May 1921, and in order to equate the military pay with the civilian equivalent, operators were given the rank of Chief Petty Officers (C.P.O) in the Australian Navy. These operators were – after 1st July 1922 in the Territory of NG – employees of Amalgamated Wireless of Australasia (AWA).

Most of the names of those radio telegraphists in Kavieng, from 1916 until the Japanese invasion on 23rd January 1942, are known to us, and a little of their history.

It is probable that the first of these, and probably to oversight the construction and opening of the wireless station, were Warrant Officer H. Neal and S. C. Ambler, both gazetted on 15th March 1916 to come to Kavieng as Chief Petty Officers.

CPO Alan Fraser of the A.N & M.E.F was the wireless operator in Kavieng on the momentous occasion when the message confirming the Armistice in Europe, and the end of the First World War from 11am on 11th November 1918, was received in Kavieng, probably early on the 12th November, taking into account the 10 hour time difference and relayed transmission delays. A celebration parade of all military and police in Kavieng was held to mark the occasion, and as Fraser had a camera, there is a posed group photograph of the event, including Fraser in his Navy uniform.

CPO Fredrick Wreford was actually a technician, a rigger, skilled in the maintenance of the, so important, tall wireless masts, but died on New Year’s Eve 1921. He is buried at the Pakail cemetery.

His replacement in 1921 was James (Jimmy) Kemp Twycross. After joining the Navy in 1914 and serving in the HMS Shropshire in the Mediterranean, he first went to Woodlark in 1916. He married Anne Winterbottom at Omo near Kavieng on 23rd November 1921, after she arrived a few days earlier on the Burns Philp ship ‘Matarum’. In August 1922 a daughter Gladys was born in Kavieng – Dr. J H Jackson and Nurse Trenauth attending – who in 2009 was still alive in Perth, Western Australia and who, with her daughter Erica, willingly provided information and copies of photos.

In Kavieng, Twycross, as OIC Wireless was, until 31st December 1921, part of the AN & MEF, then until 30th June 1922 temporarily attached to the TNG Administration, after which he was employed by AWA following the transfer of all radio communications in TNG to them. The photo of ‘Haus Toktok’ in Kavieng was taken by him.

In March 1924 Twycross was transferred to Bitapaka and in 1924 became O.I.C., later moving to Rabaul where he remained until 1938 before returning to Australia. Rabaul was the last contact with the famous aviatrix Amelia Earhart, after she departed Lae on the next leg of her ill-fated round the world flight, and disappeared forever. He was in Rabaul with his family in 1937 during the volcanic eruption that formed Vulcan volcano.

Harry Holland was definitely in Kavieng as wireless operator in 1926-7, and possibly earlier, but it is not certain whether he replaced Twycross, Jimmy Widdup, or someone else. Holland had been wounded at Gallipoli in the First World War. In 1916, after recuperation, he was trained as a wireless operator and sent to Bitapaka.  Holland tendered for and bought the expropriated German buildings of the first hotel in Kavieng, built in 1912/3 in German times, ‘The Strand’, and lived there with his wife and two children, Fred and Betty.

Holland was also in partnership with Les Bell and Frank Saunders at the store, workshop and slipway on the waterfront where the Malagan Beach Resort is now. He also had the expropriated plantation land at Pinikindu, but in 1938 transferred to Rabaul. In 1937, when the volcanic eruption prevented the wireless station in Rabaul being used, he worked long hours in Kavieng relaying the messages to and from Rabaul received and sent immediately after the eruption via the ship Golden Bear near Rabaul. As a prisoner of the Japanese he died in the war on the Montevideo Maru, torpedoed and sunk off the Philippines on 1st July 1942.

Edward (Ted) Bishton took Holland’s place in Kavieng in 1938. He had been working at Bitapaka and Rabaul for many years, but after the eruption in 1937 his wife wanted to move. He lived where the Holland’s had, at Section 5 lot 53 on the waterfront near the Malagan Beach Resort today. Bishton was already the owner of Ulul-Nono plantation, and bought Lamernawei, on the west coast, in about 1939.

Bishton was the wireless operator when three armed German merchant ships appeared at Emira island on 20th December 1940, and disembarked 496 survivors from 10 ships sunk by Nazi raiders in the Pacific. After the ships left, the SDA mission pinnace brought the news to Kavieng on Christmas Eve, and Bishton had to advise Rabaul and relay all messages that resulted from this war news.

Ted Bishton left Kavieng in September 1941, after the arrival in Kavieng of the 1st Independent Co. of the Australian Army in July, and was replaced by the almost 60 year old ‘Tommy’ Thomas as wireless operator.

Thomas departed Kavieng with a heavy portable tele-radio the day before the Japanese invaded on 23rd January 1942. He joined the District Officer Jerry MacDonald and businessman Harry Murray’s group that walked down the west coast to Ulapatur – having destroyed the radio before leaving Kaut – over to Namatanai and down to Muliama ahead of the Japanese. They obtained a small boat, the ‘Quang Wha’, from the father of Sir Julius Chan at Tanga island and eventually their group of 17, bolstered by some escapee soldiers from Rabaul, departed New Ireland on 30th April 1942 and reached safety on the north coast of Papua on 6th May 1942.