Recently my wife and I returned to Kiunga after 40-odd years to see the results of my planting the first rubber in Kiunga.

The Honourable Warren Dutton, OBE, and his delightful wife Joy’s hospitality was tremendous. Warren is Kiunga. The shareholders of his businesses of transport, construction, accommodation and, most important, the Fly River Rubber industry are made up of the local Kiunga people. The Rubber company is very successful and the success of this company is almost wholly due to Warren Dutton’s organisation and the persistence and technical skills of Me Choo Boo.

Having graduated from Dookie Agricultural College in Northern Victoria I, along with Chris Abel of Kwato/Alatau, was accepted as the last group of agricultural Extension Officers into the Dept of Ag Stock & Fisheries in 1961.

I was posted to Oriomo in the Western District and, with only 3 senior staff in the district, my patch was most of the 33,000 sq miles of the district. Daru was the centre for the development of the fabulous barramundi fishery of the Oriomo coast.

The general concerns at the time were that most of western Papua was a big swamp. I patrolled over the entire Trans Fly including the Binaturi, Bituri, The Suki, and Morehead and beyond. The initial prediction that this area would be a wealth of agricultural production has been proved.

I encounted a few tricky moments on my first trip into the Morehead when travelling down the Wasa Kusa in an ocean going lakatoi. We’d pulled up for repairs on a mud bank out to sea and I was shooting sharks with my 22 to pass the time. Beyond Boigu Island it was blowing a gale and big seas. By 11pm as we headed to shore we hit a mud bank about a km out: the mast collapsed and the hull split down the middle. The 20 or so of us aboard made it to land safely. Rockefeller was lost in a similar situation a few years before a few kilometres down the coast. In those days a posting to the Western district was considered a hardship posting. Further down the track at Mari the patrol rested. The locals provided hundreds of mud crabs, pigeon, duck, lobster, barramundi, pig and venison.

I carried out the first patrols at Kiunga at the end of 1964 and made recommendation that the area north and south of the Fly was suitable for rubber and should develop the blocks near the water for future transport.

The rubber prospered in the high rainfall blocks and the first stumps were planted in early 1965: some of the trees are still there as a demo plot.

After that I spent some time in the highlands on a pyrethrum project and returned to Australia in 1970. I now run a piggery, cattle feedlot and meat marketing enterprise on the Atherton tablelands.

While I was at Kiunga in the 60s, Warren Dutton was establishing the outstation of Olsobip and the airstrip, under extremely difficult conditions. Recently our paths crossed again and he suggested I come and visit Kiunga again as I had read all the stories of the Ok Tedi mine development.

At D’albertis junction, caught 3 big barra, and best of all became acquainted with the brilliant story of North Fly rubber.

The continued success of the Western Province rubber expansion will be reliant on securing funding for assistance on transport on the waterways.

It is extraordinary to see the population explosion bought about by the wealth created by the Ok Tedi mine. The Moin, Awin, Ningerum folk were essentially hunter gathers and their basic diet of sago and little protein ensured a very low survival rate. Kiunga’s youthful population and proliferation of trade stores indicates this has changed. To drive from Kiunga to the mine head of 150 km plus many secondary roads is fantastic.45 years ago there was 1km from station to the airstrip.

There is absolutely no doubt of the importance of the mine to the economy of the Western Province and the rest of PNG. I was stunned to hear rumours that some might want to close the mine down.Let us hope that common sense prevails.

In the meantime, good luck to all those supporting the rubber industry at village level and beyond. It has been a tremendous trip down memory lane and to glimpse the future. 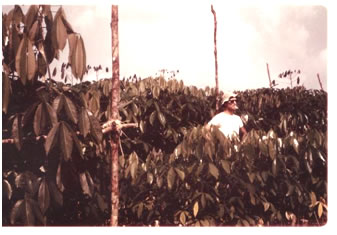 George Greenwood in the 1960s in the first Kiunga rubber nursery 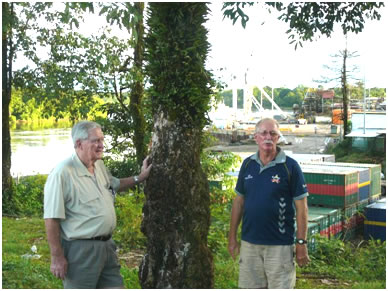