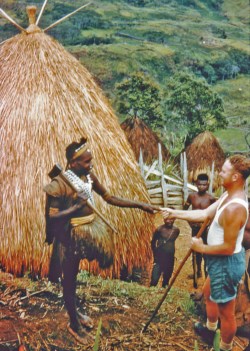 The Papua New Guinea Association of Australia advises that long time President, Harry West, OAM, has died at the age of nearly 93 years.

Loved and highly respected, Harry steered the PNGAA for 26 years until stepping back from his role as President, which he had held for 16 years, in 2008. In April 2008 he was unanimously voted an honorary life member of the PNGAA for outstanding and meritorious service to the Association, one of only 4 recipients in its 64-year history. In 2009 he was awarded a Medal (OAM) of the Order of Australia in the General Division “For Service to the Papua New Guinea Association of Australia”.

Harry’s ground breaking capacity ensured that the PNGAA moved forward with the times, that it embraced new ideas relevant to maintaining strong relations between Australia and Papua New Guinea. Always humble, Harry was generous with his time and in offering praise. His quiet demeanour belied a dry sense of humour! As a committee member under Harry’s leadership, he was a wonderful mentor. He would listen intently and respectfully. Likewise, it was worth listening to what Harry said! He was a great friend to Papua New Guinea.

Harry’s love of gardening was well known, and he was a proud supporter of the Swans, often leaving a PNGAA meeting with his red and white on.

As a Kiap, Harry had a meritorious career and was held in high regard by both fellow kiaps and all those who knew him as a friend, or through business, during his 30 years in PNG, and after he returned to Australia. Harry’s knowledge of people, places and events in Papua New Guinea, spanning over 70 years, was unique and legendary. Throughout his career Harry had a significant influence in the instruction and development of the many and growing number of kiaps who served under him.

Harry’s interest in PNG began in 1937 when he knew a young Cadet Patrol Officer, David Lyall, who explored remote parts of Papua with Jack Hides. Inspired, Harry responded to a request from Army routine orders in 1944 seeking applicants to attend a school of civil affairs for aspirant patrol officers. Interviewed by Colonel Murray, later the Administrator of Papua New Guinea, Les Haylen, the Secretary of the Dept of Territories and a Federal MP, along with numerous others, 40 ended up at Duntroon. Most were high ranking army officers at the time. After five gruelling months, 18 of the 40 were returned to their units, six were sent to Borneo and the remaining 16, including Harry, to PNG.

Harry’s first posting with the Australian New Guinea Administrative Unit (ANGAU) was to Salamaua where, in October 1945, civil administration was restored from a military government in Papua and the former mandated Territory of New Guinea south of the Markham River.

This was to be formally effected by a treaty to be signed by Colonel J.K. Murray, representing the civil administration, and Lieut-General H.C.H. Robertson and Major-General Basil Morris, who commanded each area. Due to bad weather, a break in communications and other issues, Lieutenant Harry West, as the senior ANGAU officer in the vicinity, signed this significant treaty on behalf of General Robertson. A good start for a young officer!

Harry referred to his historically important role in facilitating the handover from ANGAU to the post war civil administration in Salamaua in 1946 as follows:

The Transfer of Authority from Lt-Gen Sir Horace Robertson and Major General Basil Morris to the incoming Administrator J.K. Murray was to have taken place in Port Moresby with some ceremony. Murray and party, who had all the relevant documents, were to have flown from Lae to Moresby on the appointed day, but could not do so because of bad weather and it was hurriedly decided that Murray should go by trawler to Salamaua where the District Officer, Major Kyngdon, would deputise for the generals, as the documents had to be signed on the soil being transferred. However, radio communications between Lae and Salamaua were out and Kyngdon could not be advised so Murray set out anyway. Nor did he know that on that day Kyngdon had decided to go from Salamaua to regional headquarters in Lae, and his trawler passed Murray’s on the way. So fellow patrol officer Bert Wickham and I, being the only ANGAU officers available, as humble lieutenants, got to sign those important historical documents on behalf of the Generals.

Harry was discharged from the army in Lae on 1 March 1946 as a Lieutenant in the Australian New Guinea Administrative Unit, and was soon in the PNG Highlands. Together with Medical Assistant Gray Hartley and ADO Jack Costelloe they looked after the whole of what is now the Chimbu Province. Most of it was classified ‘uncontrolled’ and tribal fighting was rampant.

Next came two and a half years study at the Australian School of Pacific Administration (ASOPA) in Sydney from September 1947 till March 1950, the first of the ‘long courses’, then a posting to Telefomin.

After a period in Aitape in 1951 Harry went to Kainantu in 1952 with instructions from Ian Downs at Goroka that the jeep road was to be extended through the ranges to the Markham River floor within a strictly limited timeframe.

Harry assessed, with the concurrence of a couple of practical locals, that the route chosen by his predecessor would be impossible, and decided on an alternative, located by one Pokia, a Sepik police Lance Corporal. Fortunately it worked and the first motor track into the Highlands became a reality. There is a monument at the top of the Pass to Rupe Havilland, the on-the-spot CPO who supervised the mammoth pick and shovel task. Perhaps the greatest personal satisfaction of his career was to find that, years later, when the permanent Highlands Highway, professionally engineered, was put in, the location followed almost exactly the original track.

In 1956 Harry was closely associated with the first agricultural-type show in the Highlands initiated by Bill Seale at Goroka.

There was a small dairy herd at Mendi, looked after by two locals, Susu and Milik. They delivered milk each morning to the various households. One day they were caught topping up the buckets from a water race and were hauled into my office. They were relaxed about the situation: ‘No worries kiap, we don’t add the water till we get past your place.

Harry and Dulcie were married in Goroka in early 1958 and went to Wau for their honeymoon. With bad weather the light plane diverted to Bulolo, and so followed an horrendous night jeep ride to Wau on slippery roads in heavy rain. A few days later a telegram from Mendi arrived requesting the honeymoon be extended for a week. The local material court house had been burnt down; the Supreme Court was arriving and the large combined sitting/dining room in the District Commissioner’s house was the only space suitable for the court! Harry and Dulcie had a son, David. Dulcie passed away in 1989.

In mid-1958, Harry went to Hollandia (now known as Jayapura) to be the first Australian Liaison Officer to Netherlands New Guinea, a strategic posting. The position involved the exchange of grass-roots level practical administrative information, experience and procedure, nothing diplomatic.

In late 1959, Harry was transferred to Rabaul. Harry had a two months’ break in mid-1967 when he was sent to United National Headquarters in New York to be Australia’s Special Representative at the Trusteeship Council’s annual session where Australia’s administration of the Trust Territory was reviewed. It proved to be an interesting experience.

As the 60s passed, the Mataungan movement developed. Harry’s role as District Commissioner of East New Britain at a time of serious civil unrest was critical. His great humility and gentle manner belied the enormous achievements and leadership qualities demonstrated in his handling of one of the most challenging assignments in pre-Independence PNG.

‘MATA’ means ‘eye’ and ‘UNGAN’, ‘to look after’: the Tolais wanted to handle their own affairs. With more than 100 years of white domination, it was evident that they had gained little and lost a lot. Many of them were landless through the virtual stealing of vast areas of land by the Germans, that had not been rectified, and pressures on land were rising through the demands of cash cropping as well as subsistence farming and rapid population growth, related to excellent medical services. Having lost their land, economically, they saw the central government’s move towards multi-racial councils as strangling them politically. There was drama. Police strength was built up in Rabaul to 1,000: one-third of the Territory’s total force. The Tolais were divided amongst themselves about 50/50, pro and anti multi-racial council, but everywhere was the overwhelming desire to handle their own affairs. The Administration tried all sorts of approaches and brought in many local and overseas ‘experts’.  Opinions differed at the Rabaul, Moresby and Canberra levels and loyalties were divided.

During Harry’s time as District Commissioner in Rabaul, the town attracted a number of political and state visitors. Sir Hugh Foot came with a United Nations Visiting Mission in 1964 and advocated much earlier independence than had previously been proposed.

Gough Whitlam came in 1970 and Harry’s clash with him led to hours of debate in the House of Representatives with senior politicians either praising or denouncing Harry, along party lines. What Harry had offered Gough at a meeting with the Gazelle Peninsula Multi-racial Council, was a brief, polite and essential factual correction but became interpreted as arrogant, bureaucratic interference. Years later, at a memorial service for Sir John Guise (PNG’s first Governor General) at St Andrews Cathedral in Sydney, both Harry and Gough recalled the situation.

With his wartime service in ANGAU, Harry was a key link between the generation of ‘befores’ and the post-WWII professionally trained kiaps and administrators.

Harry West left Papua New Guinea in 1973 but remained closely connected through the many friends he made there. He will be greatly missed by all. 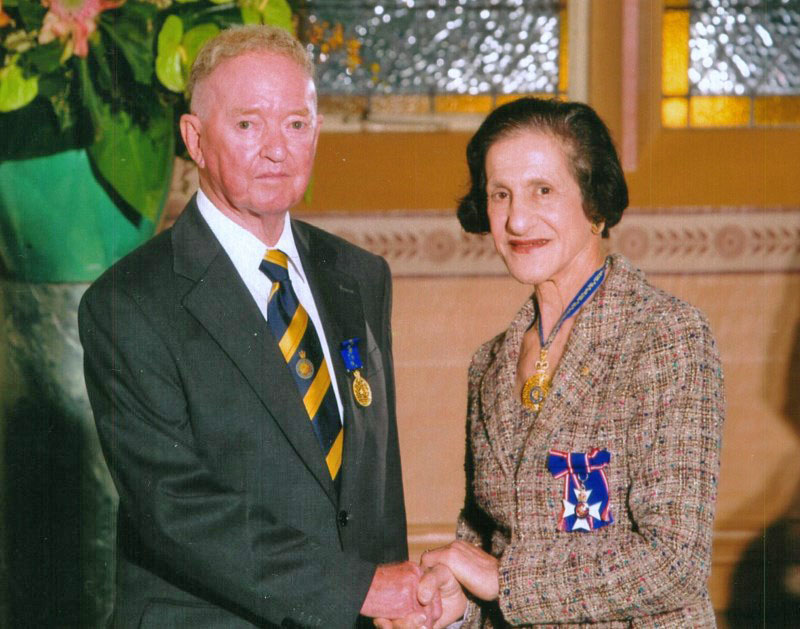 The eulogies from Harry West’s funeral are also in the Library.