In my article Cruise to Rabaul, I ended saying how I had found, among the people I met, “…an eagerness for the upcoming elections and the hope that a new government could set PNG on a better, fairer path for the future.”

Following that April cruise and Anzac day in Rabaul, I enjoyed a two day visit to Goroka. I had previously advised my friend Thomas Soles that I was coming “for a quick look.” Thomas is of the next generation of the people I knew and worked with in the mid 1970s. He’s a quiet, intelligent, behind-the-scenes political mover and shaker who knows his history. He told me he would meet me on arrival and arrange for others to be there too.

Imagine my complete surprise when, stepping down from the plane, we were escorted towards a small Asaro singsing group, complete with mudmen, for a traditional highland welcome. My companion and I were introduced to members of the Goroka Show Committee, the Chamber of Commerce and the Provincial Government. An instrumental group and singers, all blind, sang us a modern song of welcome. I was stunned.

That night I found myself guest of honour at a function to launch the major sponsor for the up-coming Goroka Show. At least I expected that: I’d been involved with the first Goroka Show in 1956 and had described it to the new show committee last year. Many of the business elite of Goroka were present and I was introduced to several of them, all PNG nationals.

That visit was far too short to get any real feel for the way things are in Goroka and the province, but I was impressed by the intelligent outlook of most people I spoke with. Beyond the hopes and aspirations for the elections, there was a discernable positive atmosphere and confidence. Crime rates are down and a civic awareness is emerging. We felt quite comfortable walking the streets: streets cleaner and tidier than reports I’d heard. Goroka is a drab town these days, needing a coat of paint, needing road maintenance and needing infrastructure repair. It’s apparent that the Provincial Government has done the best it could with limited national funds.

The elections have come and gone with some promising newcomers elected nation-wide. Most Australian and PNG commentators have a cautious optimism for the future. And now, after five days in Goroka in the Eastern Highlands Province from 13 to 18 September 2012, I share that optimism. I was accompanied by my two daughters, Susan, born in Goroka, and Kathryn, born in Balimo, WP. They hadn’t been back since 1976.

After three days in Port Moresby where I was involved with the Crocodile Prize Awards, Air Niugini left on time (hurrah!) and whisked us to Goroka in one of its new Q400 twin turboprop aircraft. It was a relief this time to disembark as mere passengers. The day had that Goroka-only, special sparkling, clean air, blue skied quality with a lingering smell of overnight rain. It augured well for our visit.

The Air Niugini Goroka Manager, Gideon Samuel, who is also President of the Goroka Show Society, showed us to our Land Cruiser, with driver James, ours for the duration of our visit.

Gideon told us about an invitation he’d been asked to pass to us: an invitation from the newly elected member for Chuave, Wera Mori, to visit Chuave to attend an undisclosed function. We were happy to accept. My daughters, “the girls”, had been particularly keen to see Chuave again: our home in 1971-72 when I was Assistant District Commissioner there. They had happy memories of coming home each holidays from secondary school in Brisbane, usually bringing a school friend with them. The young, single kiaps and didimen from miles around usually found reasons to visit Chuave during these few weeks.

Mostly, the Highlands Highway wasn’t too bad, but many parts enforced a crawling pace to negotiate slumps and huge potholes. The spectacular distant views across the Asaro valley to the mighty Bismarck Range were unchanged. But the close and middle distance views were no longer dotted with picturesque grass-thatched villages strung along ridges. No longer necessary for strategic defense, they were replaced by tin-roofed family-house clusters scattered on garden land or clinging on any available space on the road’s edge. The latter, with their attendant roadside mini produce markets, gave the road a tattiness which often spoiled the view. The numerous children still provided the squealing, laughing, waving roadside entertainment.

As we approached Chuave it was obvious that something was on. We were escorted to an area in front of the office by a singsing group, and were serenaded by a choir singing a freshly composed welcome to “Bob, Susan and Kathryn”. The local council president spoke in welcome, as did The Honorable Wera Mori, our host. He’d been in grade five at the local school and humorously took me down a peg in saying he and his school mates were more afraid of my dog than me, the kiap!

And he knew his history, mentioning several local events of the past and kiaps who’d made their mark, like Tony Keogh and Bob Mellor. Very emotional stuff. The girls mopped up happy tears and many of the elders in the crowd were in tears too because a former kiap had come back to see them. Wera, I should add, went from the Chuave primary school to a secondary and tertiary education to become the consultant geologist he was when he made his successful bid for parliament.

It was a wonderful day of welcome, warmth and reminiscence for us. But beyond that, it illustrates once again how these people hanker for the “taim bilong kiap”. I hope Wera and his colleagues can turn around this rearward view to one of optimism and realistic hope. The auguries are good.

Busy too in pointing and clicking digital cameras, at a rate of scores, hundreds even, per hour, at groups and individuals from all of the six (I think) highland provinces, Madang, Manam, Karkar, Lae, Manus, Sepik and other areas I may not have recognised.

On the final day, Sunday, a closing ceremony was scheduled. Among other VIPs in the small grandstand was the newly elected Premier of the Eastern Highlands Province, Julie Soso. She had the Eastern Highlands Provincial seat against formidable male opposition and would close the Show. I’d previously told my contacts that I would like to meet her as I knew her father, Soso, from my Goroka days. I took the opportunity of a slow spot in proceedings to introduce myself.

“Ah, Bob,” she said as she jumped to her feet, “I heard you were in town and I wanted to meet you. I have a little story to tell you.” Taken aback, I muttered something. She continued, “When I was growing up, my father told me he had called me Julie after the wife of Bob Cleland.” That really threw me and brought a wave of emotion I struggled to contain.

I introduced her to my two daughters and they were happily tearful as we chatted. She is a confident, warm and motherly person with a well-known interest in social matters and as an advocate for women. I was very impressed when she gave her closing address. She has a strong, well modulated voice and her speech was about everyone pulling together to build a strong Province in several critical fields. Without notes and speaking in tok pisin, she chose words which seemed to me to be unifying and acceptable to all ages, all political or social groups and both genders. Applause for her was strong and long.

Throughout the show weekend, there were no clashes, only a few short-lived squabbles. An alcohol ban for the duration took care of that. Everyone seemed relieved that the elections were behind them and were waiting to see what the political year would bring.

The girls and I returned to Australia impressed and happy from an amazing, nostalgic visit. We had all experienced the relaxation, positivity and friendliness everywhere we went. 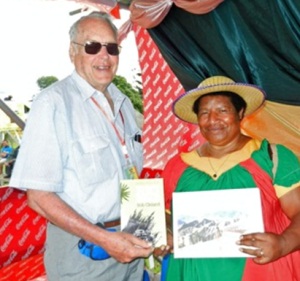 Bob Cleland presenting Premier Julie Soso with a copy of his book and a copy of a photobook of the 1953-1956 photos of Goroka and area to present to the Provincial Government.