The 70th Annual General Meeting of the Papua New Guinea Association of Australia, Incorporated will be held in Sydney on Saturday, 1 May 2021.

This is a timely speech by Alice as presently we are in early discussions with the Kokoda Walkway Memorial and Canada Bay Council in our continued search for a home for our Australia Pacific Centre with the inclusion of the PNGAA collection. 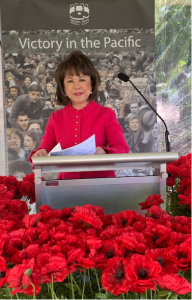 Alice Kang is currently the Director of the Kokoda Track Memorial Walkway located at Rhodes Park Concord. Alice recently retired from Concord Hospital after 46 years of service having held several leadership roles over this period, the latest as Director of Marketing and Community/Veteran Relations.

Alice commenced her nursing training at Concord Hospital in1974. Her time at Concord has seen her rise from being a Charge Nurse of the Emergency Department to Assistant Nursing Director of the Critical Care Area. She completed post graduate courses in Management and Gerontology in the late 70’s and a Bachelor of Health Administration degree from UNSW in 1991.

In1997 Alice was appointed as the state’s first Veteran Liaison Officer at Concord Hospital, a role funded by the Department of Veterans Affairs. She was responsible for overseeing all matters pertaining to the care of veterans, setting a blueprint for other hospitals around the state who have veterans in their care.

Alice was responsible for overseeing the construction of the Kokoda Track Memorial Walkway, a major project initiated by Concord Hospital. She set up the Friends of Kokoda in 1998 and spearheaded the school’s visitation program to the Memorial Walkway engaging veterans as guides allowing them to share their valuable stories. The Memorial now receives approximately 4000 students and158,000 visitors annually.

In her role as Director of Marketing, Alice was instrumental in helping the hospital engage with the broader community. She was responsible for setting up the Public Health Forum series at the hospital including the major annual fundraising events Opera Night at Rivendell and the Rivendell Flower Show. These events became major cultural highlights in the City of Canada Bay.

In acknowledgement of her work at the Hospital and on behalf of veterans, Alice was made Drummoyne Woman of the year in 2015 and City of Canada Bay’s 2018 Citizen of the year.

Alice is presently curating 2 books to capture the history of Concord Hospital and the Kokoda Track Memorial Walkway to mark their 80th and 25th anniversary respectively in 2021. 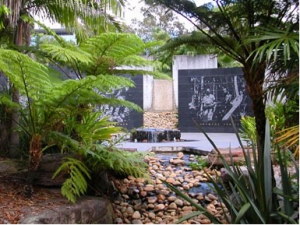 The Kokoda Track Memorial Walkway is a living memorial and a principal site of commemoration honouring all those who fought for Australia during World War II.

A principal focus is on the sacrifices made during key Papua New Guinea battles which took place in 1942-43 along the Kokoda Track, at Milne Bay on the south-eastern tip of Papua, and at Buna, Gona, and Sanananda on the northern coastline.

The Walkway covers more than 800 metres from Rhodes Station to Concord Hospital in Sydney’s inner-west, and runs along the mangrove-studded shores of Brays Bay on the Parramatta River.

At the centrepiece are magnificent granite walls bearing photographic images of the Kokoda campaign. There are 22 audio-visual stations along the Walkway, each describing a significant place or military engagement. The Walkway has been planted with lush tropical vegetation simulating the conditions of The Kokoda Track.

Full details of the agenda for the AGM are available via this Link.

A luncheon has been arranged starting at approximately 1:00 pm.

Cancellations advised by Thursday, 22 April 2021 will secure a full refund. This is the date we need to inform the Club of final numbers; after this date the Association must pay for those unable to attend. Please note that this function may be affected by changes to Covid-19 restrictions applying
in NSW.

There is free on-site parking available to those driving – entrance via Ashley Street at the rear of the Club. The train station is nearby; public transport information Ph: 13 15 00

If you are interested in attending, you may use the form below to make payment and reserve your place.