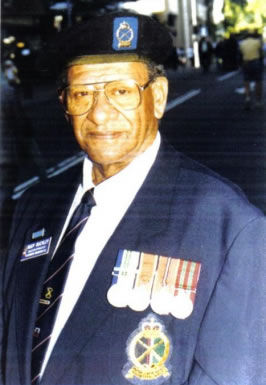 One of the most incredible discoveries to come to light confirming the departure of the Montevideo Maru1 from Rabaul with captive service personnel and civilians was from the eye witness account of a then twelve-year-old child. This led to further investigations with conclusive proof identifying one of the many soldiers being herded onto this unfortunate Japanese POW vessel.

Rudy Buckley2, as a young child living in Rabaul with his parents3, was one of several children given camp jobs and various other duties by his Japanese captors one of which was cooking rice for the soldiers. They worked for nine to ten hours daily for a small sack of rice. 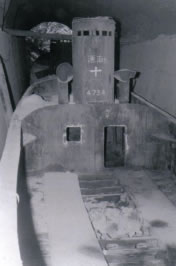 Around the time of the sailing of the Montevideo Maru from Rabaul in June 1942, Rudy was working within the area of the Colyer Watson wharf (coal wharf) near the former Shell depot in Wharf Street, Toboi, when he became aware of extensive lines of servicemen and civilians all in shorts, part or tattered uniforms, under cover of soldiers with machine guns. They were being herded from a POW camp situated in the area later
known as 2/22nd Street towards this partly burnt out wharf. Rudy recalls that at this time the town was under aerial bombardment and squads of the captive soldiers were forced to take cover in a very large concrete rain water drain until the raid was over. After this he saw that they were then being taken by barges (of the type Rabaulites have later seen in the tunnels, i.e. a landing type barge with an armoured elevated steering position at the rear) from this wharf to the vessel anchored two to three hundred metres further out in the harbour. The loading of these POW in this manner took the better part of a whole day. Later that afternoon there was an allied bombing run over the harbour and the undamaged POW vessel left before nightfall.

As these captive soldiers and civilians were being marched to the foreshore for carriage on the barges to be taken to the Montevideo Maru, one soldier4 smiled at Rudy and threw him a khaki army issue handkerchief, secreting it from the view of ever present Japanese guards. As was 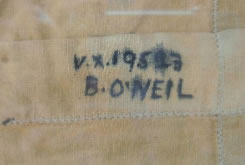 then the requirement, soldiers’ names and serial numbers were written on issue uniforms and accoutrements in Indian
(black) ink. Rudy, being unaware of the significance of this name and serial number retained this memento and thought little of it. He kept it in a tin box along with Australian soldiers’ badges and other items which remained buried at Ratongor about twenty miles from Rabaul on the north coast road, during the period of his family’s captivity there. This would have occasioned severe punishment had his captors discovered the buried tin box.

In recent years there has been substantial public exposure of the loss of the Montevideo Maru with its 1,053 service personnel and civilians. With the intensity of the Japanese bombing of Rabaul in January 1942, the acting Administrator, Harold Hillis Page, cabled Canberra for permission to evacuate from the untenable position at Rabaul, on the Norwegian vessel Herstein then loading copra in Simpson Harbour. The request was denied by the Curtin war-time government; the Herstein was bombed and burnt three days later sealing the fate of those in Rabaul.

An active member of the NG & PNG Volunteer Rifles Ex Members Association, Rudy recalled around 2004 that he had a tin box at home containing various mementoes collected over a number of years and discussed this with another association member, Douglas Ng who thought the matter of significance. One of these was a handkerchief from a soldier more than 60 years earlier and still in its original condition. He notified the Association thereby establishing a link with one of the many captives who boarded this vessel. 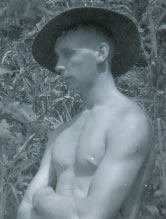 This handkerchief bore the soldier’s serial number, VX19523, and his name B. O’Neil. With this information, I accessed the Australian War Memorial WW2 nominal roll and found details of his service and more importantly that he had been living in Box Hill, Victoria, when volunteering and where, by coincidence, I happened to be living. I thought that it might be possible to locate
surviving O’Neil family relatives close by and contacted a journalist from the local Whitehorse
Leader. A full front page feature article was published on 4 June 2008. There was nothing for over a week and then a single phone call. One reader phoned details of a lady in North Balwyn, an adjacent suburb, who might have information. At that address, I was given a name of the former owner as well as an address of a woman who had moved to Queensland.

On 3 July 2008 I received a phone call from a Carole Worthy whose mother, in 1941 was Miss Grace Robinson of 5 Barcelona Street, Box Hill, and had been the girl friend of Barry O’Neil for a couple of years prior to his transfer to Rabaul in early 1941. A week or so before this, Carole had come to Melbourne to clear out the family home in North Balwyn where her mother had resided, before moving to Queensland to be with her. She was shown the newspaper article. She then located two letters, dated 14 and 31 December 19415 from Barry O’Neil to her mother, two photographs and some other documents.6

Carole came to see me on 7 July 2008 and allowed me to copy her mother’s documents. After the letters stopped arriving from Rabaul and with the fate of the Rabaul captives not known for some time, Grace married some years later and became Mrs Grace Baker.

Late in 1945 Australian families, following an investigation in Japan by Major H. S. Williams, received notification of the deaths of those on the Montevideo Maru. As Grace had then married it is thought unlikely that the O’Neil family in their grief (a cousin of Barry’s had also died at Singapore) conveyed this news to Grace. It was not until she received a letter dated 11 November 1963 from the Commonwealth War Graves Commission that she was advised of Barry’s death on the date of the torpedoing on 1 July 1942.

On a broadcast on ABC radio Macca’s Australia All Over on Sunday morning 20 June 2010, Carole visiting Canberra in connection with the long overdue Federal Parliament recognition of the greatest maritime loss Australia has suffered stated that the discovery of the handkerchief, which her mother viewed at the Association’s museum shortly before her death in 2008, finally brought closure to her after more than 60 years.

Having been involved with Montevideo Maru interests and investigations for around two decades, I have come to the conclusion, despite the conspiracy theories to the contrary, that the POWs were on this vessel. Apart from Rudy Buckley’s
remarkable eye-witness account, there is positive evidence from a Japanese seaman, Yosiaki Yamagi, now the sole surviving crew member, that prisoners were confined below decks on this vessel when torpedoed. This was proven when Albert Speer, MBE, of Sydney working in conjunction with Hisashi Noma, a Japanese historian and author of a book on the history of the merchant fleet of the O.S.K. line, located Yamagi after an extensive search.

We know that the Rabaul officers and nurses were taken to Japan on the Naruto Maru, which left Rabaul at about the same time and, in due course, survived their captivity in Japan. Japan regarded captive prisoners a slave labour and it is highly likely that those captives from Rabaul were being conveyed to work in Hainan mines; why would they eliminate such a large number of labourers on an otherwise empty vessel returning to Japan?

A recently located photograph shows this vessel named on the stern MONTEVIDEO MARU OSAKA (port of registry) over the seven hiragana characters. Subsequently Mr Hisashi Noma, who is a world expert on the OSK line, identified a photograph of its namesake built in 1956 and used in the South American trade until 1981 when it was scrapped. This more modern vessel also bore the name MONTEVIDEO MARU under seven hiragana characters and was pictured with the Oakland Bay Bridge in San Francisco in the background.