My first interest in the old “European cemetery” dates back to the late 1980s when fellow-former kiap and friend Dave Henton and I decided to locate former Lieutenant Governor Sir John Hubert Plunkett (“Judge”) Murray’s grave. Our interest in Papuan history and re-reading of Canon Ian Stuart’s 1970 excellent book about Port Moresby was the catalyst.

It was the dry season and we wandered over all of the identifiable cemetery area. We too noted the absence of any plaques on headstones. It was obvious however that there had been various attachments in the past. We also noted the new graves – flower-covered fresh mounds and holes either partially dug or already dug. It was also obvious that some of the new graves were very, very close to older ones! A number of ‘newer’ graves were surrounded by their own individual fences/cages! 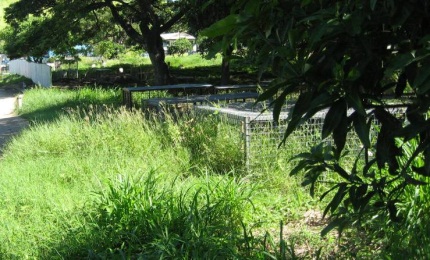 We enlisted the support of a couple of Goilala school drop-outs from the nearby squatter settlement who took an interest in our meanderings. Between us we failed to find Sir Hubert’s grave. We wandered back towards our car, planning to later use our contacts to enlist the help of an appropriate older resident of nearby Hanuabada. Back on the road an elderly Motu gentleman happened to pass as we neared our parked vehicle. After an exchange of a few words (in Motu) we were led a few meters to a site with a headstone lying flat across the few centimetres high cement-rimmed border of a grave.

With the old man’s help the three of us righted the headstone, and … sure enough, the engraving confirmed that our goal had been successful. We secured it as best we could in the upright position and, satisfied with our achievement, left thanking our helper who appeared to be impressed both with the interest shown by the two taubadas and the fluent Motu of Henton in particular!

Much later, after Dave had left PNG, I happened to mention our discovery to my old friend and former-kiap Graham Pople, MBE. So, one Sunday we decided to pay another visit. It was the wet season and despite the site’s close proximity to the road where we had parked our car it took a few minutes to re-locate the grave. Tall grass and even small shrubs covered just about everything except for the several new diggings and mounds.

At least the headstone was still erect! 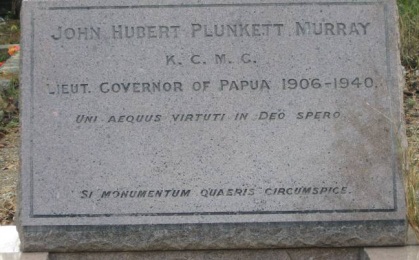 Graham was a member of the Port Moresby Sub-Branch of the RSL (Canberra, ACT Branch). He was a National Serviceman in the mid 50s. Graham was on the aircraft carrier HMS Vengeance on loan to the RAN to bring a squadron (77th) of RAAF Meteors back from Japan after the Korean War. I had joined as an Associate Member. Monthly meetings were held in the Officers’ Mess of the RPNGC Headquarters in Konedobu, the old RSL building at Ela Beach having burnt down and the Boroko Sub-Branch long since defunct. (The latter’s premises, for a while, became the ex-seminarians’ club.)

The RSL had a small amount of cash reserves in its trust account which from time to time it used to donate to, or spend on, worthy causes such as subsidizing education expenses of descendents of PNG ex-servicemen. Another example was that of assisting a Policeman, blinded in the Bougainville conflict, who was able to come out of enforced retirement to become a radio operator at Rabaul Police Station after mastering Braille.

We put it to a meeting of the RSL that Sir Hubert’s grave was worthy of maintenance and that a small amount be made available for such in light of his service in the Boer War. We further suggested that it would be nice to promote an interest amongst the students at the Badihagwa High School in the history of their Country. What we proposed was the donation of several books to the school, to be presented after a little “tok-savi”. Further that an offer be made of a small cash prize to the student who wrote the best essay on Sir Hubert and that the school be commissioned to keep the grave reasonably well maintained in return for regular donations of books to their library.

The Members at that meeting decided that it was probably more appropriate, and worthy of Sir Hubert, that his remains be exhumed and interred at Bomana War Cemetery where the grave could be properly maintained by the Australians. I objected to this explaining what Moresby meant to Sir Hubert and what was engraved on his headstone: Si monumentum quaeris circumspice (“If you seek a monument look about you”).

(In retrospect maybe Bomana is a more suitable location because, as Stuart notes, it does seem that Murray preferred being out of Moresby rather than in town!)

I was supported by Graham and another former-kiap and member of the RSL, Peter Turner and by John Meehan who, for a short time, was President. Long-time President John Mudge also agreed. The “old-timers” were still in the majority just before the short-lived ECP disaster saw the RSL “hi-jacked” by the influx of former and current servicemen and AFP peace-keepers etc from Australia who were pouring into PNG and Moresby in particular. The Committee of “B4s” was soon voted out!

So it was that Graham, Peter and I attended an assembly of teachers and students at the High School and spoke about Sir Hubert and a short history of Papua. We handed over half a dozen books I had accumulated from spares in my own collection or acquired from Bill McGrath’s Pacific Book House. We mentioned the proposed prize for the best essay after any interested students had had time to read some of the books or parts thereof.

Our offer was graciously accepted and we departed after a vote of thanks, pledges of support from the staff and amongst applause from all in attendance.

A couple of weeks later a visit to the cemetery revealed a very tidy grave site, clear of any vegetation, amongst a sea of kunai and other vegetation. The cement borders were now revealed to be the tops of “walls” above the a lower cement top of the grave which previously had, over the years, been hidden under perhaps 20 centimetres of accumulated earth and gravel.

The dry season came and went and within a couple of weeks of the onset of the next “wet” the grave was obscured. Nothing had been heard from the school about any essays or further interest in receiving books on PNG.

My recent visits to the cemetery were in November 2011 and February 2012. The wet season was late arriving and even in early November the grave was clear and the cemetery looked somewhat parched. However, by February the grave was hidden in the usual seasonal vegetation but at least the headstone was still upright.
A metal fence had also been erected along two or three sections of the (apparent) boundary lines of the cemetery.

In Moresby in late April I was informed by my former kiap and politician Sir Barry Holloway that due to the (usual) disputes that had arisen (governments, landowners, squatters??) fencing work was still incomplete. 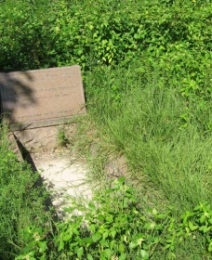