The quadrangle at the Goroka Teachers’ College

Part One of my story told of my years at Kompiam (UV, June 2019, p.15) and Part Two (UV, December 2019, p.37) featured the years at Jimi River School, and Keltiga Primary T School, which became a pilot school for a New Mathematics project.

However, I was not there to see it to fruition because I was moved again to Mount Hagen Primary T School as deputy headmaster.

There were two reasons for this and the first was because I had got married. 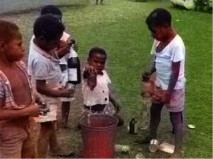 The second reason for the move was the desire of District Education Officer, Tas Hammersley, to set up a New Maths Project in a larger centre for the training of teachers. Both Nonie and I were to be involved in this, through teaching together at the school and developing resources. We did this over a couple of years and conducted workshops in other centres including the Southern Highlands, East Sepik and Madang.

The headmaster at Hagen PTS was Dick Ellison, a practical downto- earth no-nonsense Western Australian teacher. He was naturally dubious of the New Maths and enthusiastic young teachers like me. But he was willing to give it all a go. Dick told us that we could do anything we liked in maths, but at the end of the term he would give the class a test in the regular arithmetic they were expected to know in our classes, according to the present curriculum.

He followed it up and the children passed with flying colours. It was a reality check, but one I have always remembered in the many projects I have been involved in over the rest of my career. The children’s present learning needs came first and had to be addressed in whatever you did.

At the school, we were given a new double classroom for our maths activities, and as a place to conduct demonstrations and run workshops for teachers. Nonie and I worked hard to get our respective classes up to a demonstration standard, before inviting teachers in to observe and interact with the children.

Nonie with her prep class.

Success was limited since many teachers, both indigenous and expatriate, found some of the concepts and expectations too challenging. Some of the bright students would often trick observing teachers by claiming a wrong answer to be the correct one. We tried to assist teachers by producing teachers’ support books such as A Hundred Number Games for Primary Classes. However, momentum was developing and the Education Department, along with commercial educational interests, wanted a new national curriculum.

Coming out of this was TEMLAB, a mathematics package destined to be distributed to all schools. Both Nonie and I were involved in this, resulting in a posting for me to the new UNESCO-supported Goroka Teachers’ College as a lecturer in mathematics education, and Nonie to the North Goroka Demonstration School as a teacher. Prior to that we had a couple of great years teaching at Mt Hagen PTS, not just the new maths but also developing new resources in teaching English and helping indigenous teachers. 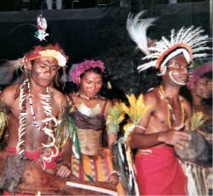 The brand new GTC was to be the first college to train both primary and secondary teachers and to assist in that were appointed UNESCO lecturers as advisers for each department. They arrived with experience in many countries around the world and we PNGexperienced lecturers looked with awe at the prospect of working under them, keen to learn what we could from these world-class experts.

While they were nice people, they tended to have knowledge that was way out of date. Their attention seemed to be on other things, like continuing their research into the parasites of certain beetles, or spending their allocated UNESCO funds on the likes of building a telescope centre on the roof of the college for the study of the stars, when we only had a handful of clear night skies each year. The result was that we Territorian lecturers largely developed our own courses to fit the needs of our students when they went out to teach.

However, we tried to encourage the open mindedness of a tertiary institution, which included encouraging political awareness. This resulted in one of the first political parties being formed at the college. Students generally were keen to encourage the government to start considering a quicker timetable towards independence. Initially, they became very active in symbolic activities such as getting a name for the country and the design for a national flag.

We did not forget the need to connect college life with traditional culture, and the college became a rich centre of art, drama and traditional music and dance. 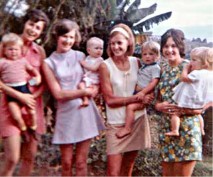 But there was more to successful student development than just the teaching staff. The partners of most staff were also engaged in teaching themselves, or they were engaged in creating families, and in involving students in a range of family and personal development activities.

Some engaged in other activities as volunteers making an important contribution to community life.

Nonie set up a Brownie troop that broadened the skills of girls in a changing society. My main activity was the sport of korfball. (This is a separate story described in Part One.) This sport also had an educational purpose in that it was a mixed gender sport and enabled boys and girls to play together in a spirit of equality. It worked very well at GTC and students took it on their own initiative to all areas of the country when they graduated.

Madang 1972–75 1971 saw us moving to Brisbane for a year to study at Queensland University. Our return was to Madang where I was to take up a post at Madang Teachers’ College, becoming Senior Lecturer in Social Sciences while Nonie took a position at Jomba Dual Curriculum School. 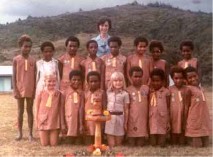 Nonie Kirkby as Brown Owl and her Goroka Troop.

At the college, my past began to catch up with me in a very pleasant way, as four of my ex-students from Keltiga and Mount Hagen schools were now at the college as student teachers. Others, who had been student teachers at Goroka, were at local Madang schools as teachers. All this enhanced our family life, to be living in such a pleasant place, where the college rented an island at Nagada, which we visited with friends at weekends and at other times with student groups.

It was an exciting time to be in the country as the move towards self-government and independence accelerated. Indigenous lecturers started taking up positions in our colleges, and there was an expectation to help develop any aspect of life that could contribute towards meeting the demands of independence. I was involved, for example, in setting up political education programs that could be used in the local community and administered by teachers.

The college island at Nagada, a haven for staff and student recreation.

Sometimes, with the push for quick changes, there was insufficient time to do a good job. One example that stood out for me was being asked to go to education headquarters in Konedobu, where I sat in an office with a typewriter to write a whole new social science curriculum for primary schools in just two days! Luckily, it was not accepted in its entirety because it was criticised and modified by some indigenous officers on their way up to top jobs in the Education Department.

As lecturers, we engaged in a range of initiatives to help prepare the way for indigenous teachers and lecturers when we departed. Two such programs aimed to support the teaching of social studies and to facilitate the recording of traditional cultural art and crafts. 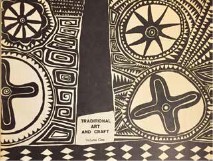 Self-government came and in as many ways as possible we looked to make it a reality. In the sport of korfball, now expanding throughout the country, we attempted to make it as self-governing as possible and all administrative positions were in indigenous hands. Furthermore, we attempted from the beginning to have a community awareness expectation. We expected players to contribute to the community in raising funds for community causes, or doing community work such as building a shade house. Looming independence led Nonie and me to consider our family’s future. As much as we loved Papua New Guinea, it wasn’t our home for life and it didn’t present a future for our family. The idealistic missionary fervour that I had for Western education when I arrived had been well tempered and modified over these years. The many expatriate colleagues and students I knew would continue to evolve an education appropriate for an independent nation with such rich cultures as their foundation.

The opportunities to do further study in England, career prospects in Australia and family connections led to us leaving the country just prior to independence.

At different times, we both returned for short visits to make small contributions, and to remind us of this richly developmental part of our lives.