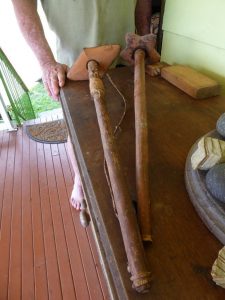 My wife and I were downsizing our personal possessions before going into retirement, and I had approached the museum to see if some of my PNG artefacts could be included in their collection. Included among these artefacts were the two Kukukuku clubs. The curator seemed happy to receive them.

I had purchased these two clubs in about 1971 from a Kukukuku man who had been resettled to the Buvusi oil palm settlements scheme near Hoskins, West New Britain. One club was a typical five-pointed star club, the other rectangular with points on the corners, and were painted with ochre. These Kukukuku men had a reputation for being very tough characters with an assertive attitude.

Settler men from all over PNG had arrived at the settlement area before their wives and children, so they could build their houses and plant food gardens. The Kukukuku men had arrived with the rest of the settlers and I had their house-building material ready. However, heavy rain had made the road to their blocks impassable. These men, when confronted with the situation, went and corduroyed, with tree limbs, the bad parts of the road leading to their blocks. I was very impressed with their industry and self-help. Because the roads were now driveable, the building material for their houses was immediately delivered and carpenters sent to help them build their houses.

Later, one of the Kukukuku men came to me and wanted to sell his stone clubs—he said the steel axes were a lot better and he had no need for the stone ones. The stone clubs have hand-hewn round handles on them and one had a small band of bark (tapa) cloth around the base of the handle like a collar. This Kukukuku man told me that, within the tapa cloth, there was some hair of the first man this club had killed—I suppose like a trophy for the weapon. The description he gave of the occasion of the initiation of the club was this: he whacked the victim over the head and the brains came out. Then the blowflies came and crawled over the mess. He only wanted a few dollars for the two clubs. I paid what he wanted.

These Kukukuku men preferred steel axes to stone clubs—they would remove the handle from their issue steel axes and put a hand-carved tapered handle onto the axe head. A rope would be attached to the handle so as they could to carry the axe over their shoulder, with the shiny sharpened steel glinting in the sun.

The Kukukuku men were greatly respected.

As a didiman on the oil palm scheme in the sixties, we had little to do with agriculture, and more to do with logistics. Roads had to be made and managed, sawn timber collected and delivered for settler housing, and labour managed. The co-operative grocery stores needed supervision, seedling oil palms had to be collected from the nursery and delivered to the settlers, there were settler politics and many other things. There were also the wild cards of heavy rain and truck breakdowns, which put a stop to everything. This often caused a high level of anxiety, as things did not happen when expected and people were, understandably, unhappy.

Once, a group of settlers confronted me about some logistic blip. It must have been important because they were quite vocal. A group of Kukukuku men were walking past and they came and sat down near me and the angry men and said, ‘Pita; emi didiman bilong mipela.’ (Peter is our agricultural officer). The group of angry settlers just faded away.

It was good to have a group of Kukukuku men with their shiny axes on your side; it reduced the stress.