Imagine being able to pay your parking fine with a string of shells. In Papua New Guinea’s East New Britain Province, you can do precisely that! 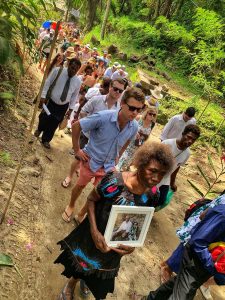 Family and friends in procession up the hill to the matmat.

The pearl oyster, the cowrie and the giant clam are common shells of adornment amongst the many tribal groups of PNG, and in New Ireland the misi shell is still traditional barter, however, it is only in neighbouring East New Britain (ENB) where the tiny snail shell known locally as palakanoara is legal tender.

Shell money, or tabu, has been used by the Tolai people for hundreds of years. The German Imperial Government tried to eliminate it in the late 19th century by granting locals access to the German New Guinea mark and pfennig through authorised bank accounts, but this proved unsuccessful. Tabu has since survived Japanese occupation and the arrival of Australian sterling and decimal currency.

In 2001, as the value of the kina dropped, the ENB provincial government officially accepted tabu as payment for a range of taxes and invested local courts with the power to award restitution and settlement of disputes in tabu. The outbreak of Covid-19 further increased pressure on a nation already facing major economic challenges and political uncertainty, and the Niupela Pasin—the new normal—saw a return to old ways in ENB.

Aunty Minia Tolik from Kerevat district says that during the lockdown period:

We couldn’t travel to town to sell our produce at the markets or buy things from the shop, so we started to use our tabu more.

Vanessa Mulas, a resident of Kuradui village, says those who were able to circumvent the cancellation of public buses brought back store goods and exchanged them with neighbours for tabu.

The re-mobilisation of customary wealth has added value to the purchasing power of tabu, reinforcing age-old customs and instigating the establishment of shell money banks in the major centres of Rabaul and Kokopo. There is about K8 million worth of tabu currently available amongst the Tolais, with only a quarter of that estimated to be in circulation. These days, tabu can be used in local markets, trading stores and churches, and when exchanged into kina, to pay for school and hospital fees.

Tabu is valued in three ways: by the length of the fathom of shells, the number of shells in the length, and the quality of shells being presented. Its economic value is underpinned by the painstaking labour involved in its production, its cultural value is reinforced each time it is distributed in ceremony and its spiritual value arises from the mighty ocean. Like a long genomic trail, it carries into the future the inherent energy of wisdom passed down through the ages.

This little snail shell is much more than simply a bartering medium. It has traditionally been an intrinsic part of mourning ceremonies, bride price, initiations and other significant customary practices. It is indispensable during sacred rites, particularly so during Kinavai, a ritual which pays tribute to the origins of shell money and the oceanic lineage of the clan. Its exchange forges bonds, resolves disputes and honours ancestors. It is not just a symbol of prestige but the representation of a profound spiritual belief and its use signifies deep respect within Tolai society. It also plays a crucial role in inter-clan networking and the reinforcement of traditional governance. 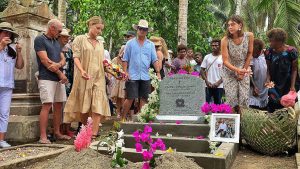 The gravesite of Alf and Marylou

In the late 19th century, my great-great-grandmother, Phebe Parkinson, sailed from Samoa with her Danish husband to settle in the largely un-charted Gazelle Peninsula. She learned the local customs and languages, planted the very first coconut plantations, settled disputes, took orphans under her wing and helped her sister Emma establish a vast trading empire in the Bismarck Archipelago. She is now buried on the land where she once lived, in the Parkinson family matmat (cemetery) at Kuradui, near Kokopo. Adjacent to the matmat is the Phebe Parkinson Study Centre for disadvantaged children run by Sila Watanagi, who also looks after the well-being of my ancestral spirits.

I first met Sila when I volunteered at the school for a few months in 2013 and she had taken me to my first tabu-breaking ceremony during that time. In 2019 I returned to Kuradui, not as a volunteer or a spectator, but as an 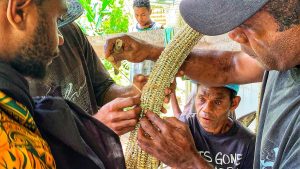 integral part of a special mourning ceremony (minamai) for my Uechtritz grandparents, who had finally been brought back from Australia to be buried in the family matmat. I had put my hand up to be the on-the-ground representative for our family, working closely with the local communities and liaising with my family members back in Australia.

It had been a year in the planning—a long deep dive into history, cultural complexities, logistics, documenting, negotiations and re-negotiations, co-ordination, permissions. A year to grow pigs from baby to beast, to hold those numbers through death, disappearance and misfortune. A year of listening to stories from before and voices from long ago whispering in the wind; and everywhere signs; and every day the unexpected. I am no longer the girl who packed up her Eastern Suburbs bayside apartment in Sydney. I have found my place. The long process of bringing my grandparents’ home to rest has become the most defining time of my life. 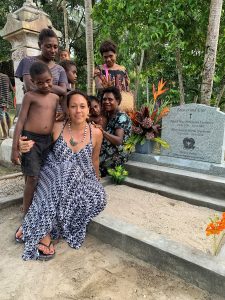 Part of my responsibilities has been to commission enough tabu for use and distribution over two days of ceremony. It must honour both the cultural aspects of inter-clan networking and the spiritual needs of the deceased. An agreement was reached that ten aripe (approx. 10 m) per sibling was required. My mother is one of ten, therefore 100 aripe.

Integrally intertwined with the latent power of the tabu and the culture of the Tolai are the mysterious and powerful tubuan. Every clan is represented through its own tubuan and I had to find and identify our own. If there are no tabu, the tubuan don’t emerge from the spiritual world to ensure safe passage into the afterlife. Without it, our loved ones are doomed to wander forever, unrecognised, on this earthly plane.

Over 100 family members and friends have flown into this remote province from the four corners of the world, booking out almost the entire accommodation reserves of the Kokopo beach bungalows and beyond. The local Tolai clans have taken ownership of the ceremonies. As is right and proper.

The day of the minamai is a perfect September day. At the bottom of the Kuradui driveway, we meet Timmy Nandre, now an old man but once a little boy with the big responsibility of minding my aunties and uncles as children. I had crossed flood-swollen, crocodile-infested rivers to find him. He is family. He holds the container with my grandparents’ ashes tight to his chest as he and his wife, Maria, head the procession up the hill. As we climb, we sing. 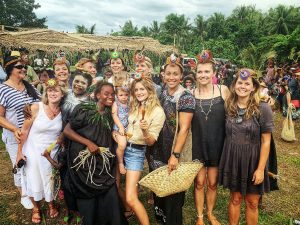 My grandparents are first blessed in the Catholic tradition. Family and friends pay tribute. My youngest uncle identifies himself as the last born of ten. He speaks in Pidgin, reminding us that my grandfather was born on the open sea in a small canoe and my grandmother always had a strong aversion to being ‘contained’. He asks for us to pause before we cover their ashes, to let their spirits breathe again in this place where they met and fell in love, not just with each other, but with the land and its people.

Not to be outdone, Timmy jumps up and steals the show by reminding everyone that he is the oldest brother and that makes eleven. His animated story-telling of days gone by leave all of us laughing out loud. There are tears as well, but mostly it is a time of quiet reflection. The drums sound and the chewing of betel nut begins. Trailing a field of frangipani in our wake, we bid farewell to the corporeal and move toward the stepping stones that lead to the hereafter. 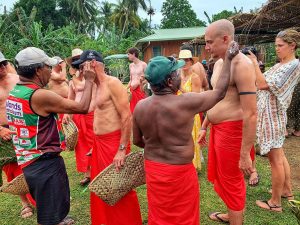 One of the many local Tolai clans, the Tolom, are going to officially adopt every member of our immediate family into their clan. This reflects the abiding respect accorded my great-great-grandmother. An uncle, a cousin, a little grand-nephew and myself exchange baskets of tabu (three aripe of tabu) with representatives of the clan. To this day, I am still absorbing the significance of this ritual. I now belong to the Tolai, who will forever be the guardians of my grandparents’ spirits. I am honoured and profoundly moved.

And now, 18 of my male bloodline relatives of a certain age are about to undergo the first level of initiation into the Tolom clan’s secret men’s society; this will take place away from the ceremonial grounds, under the same tree where my great-great-grandfather was also initiated. This initiation (niolo) is strictly guarded and cannot be discussed with anyone. Betel nut and a minimum of one pokono (arm’s length) of tabu per person initiated is offered.

The rest of us will never know what happened while they were gone, but the 18 left as though going on an adventure, with puffed up chests and western egos. When they return wearing only red lap-laps and the markings of ritual, they come as a unit, bearing pride and humility and a connection that I have never seen in them before. 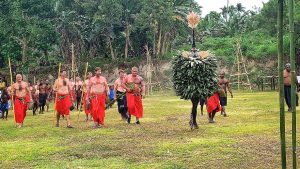 Returning from initiation led by tubuan

Preceding them come the tubuan, only two feet visible from beneath spherical layers of red and green leaves and a mask with large staring eyes and a pointed head. Children fall silent and stay close to their mothers, and the magic of centuries crackles in the air. In the past, such ceremonies would be closed to strangers on pain of death. We are all mesmerised. This is not a show for tourists and foreigners. We belong now.

The following day, we all return for a ceremony called a git-git-vudu to remember our ancestors together. We break open the large coils of tabu and distribute them amongst the community along with the precious pork from the troublesome pigs and hundreds of bananas. And now, finally, it is time to dance. The sing-sings begin. Our new Tolom clan, the Kuradui community and the spirits of our ancestors dance and sing of things I am only just beginning to understand. The Kuradui female group pull myself and my mother into their ranks, covering us with kumbung, a mixture of lime powder and betel nut.

Editor’s Note: This story was originally published in PNG Air Magazine whose editor has kindly agreed to its re-publication in PNG Kundu.