Featuring articles and news reports about
contemporary Papua New Guinea—also included are
the nation’s sporting achievements and events, and
stories about young people doing interesting things—
we encourage young people to become involved in
PNGAA to ensure the strong ties formed between PNG
and Australia continue into the future.

At the referendum held on 23 November 2019 to determine the views of Bougainvilleans as to their future relationships with PNG, an overwhelming number (97.7%) chose independence. 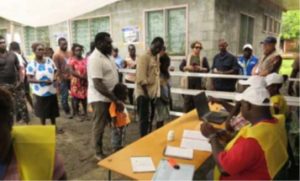 The first people to vote in
the Bougainville independence
referendum in the capital Arawa
were the former commanders of
the BRA (Bougainville Revolutionary
Army) Ishmael Torama and Chris Uma,
centre, standing with their children
(Photo: Ben Bohane/SMH)

The polling period ran from 23 November to 7 December, with over 800 polling locations in Bougainville and across Papua New Guinea, Australia and Solomon Islands. Australia was among five nations that witnessed the signature of the Bougainville Peace Agreement. New Zealand, Solomon Islands, Fiji and Vanuatu also played roles.

An eleven-strong  Australian Observation Mission was led by the Hon. Jane Prentice, and the Australian observer team’s interim assessment is that the referendum process was free, fair and credible.

Australian Foreign Minister, Marise Payne, said in a media release: Australia was pleased to support the preparations and conduct of the referendum, along side the United Nations and other international partners and donors. The successful conduct of the referendum concludes one of the three pillars of the 2001 Bougainville Peace Agreement. Australia looks forward to continued productive engagement as the Bougainville Peace process enters its next stage.

A forty-day petition period for the referendum closed on 20 January and no objections were received in that time. Mr Bertie Ahern, the chair of the Bougainville Referendum Commission, said: I am delighted that the referendum vote was a success, that it was free of objections, and that both international and local observers found it to be free and fair. However, the completion of our work means the larger task of coming to a final decision must now commence. It’s critical that the momentum and goodwill achieved during this historic and peaceful vote is harnessed and maintained. We wish the two governments all the best, and again thank the people of Bougainville for their outstanding engagement and cooperation in our small part of the ongoing and longer term peace process.

It has been made clear all throughout the referendum process that the results would be nonbinding on the PNG Government. The Bougainville Peace Agreement, which stipulates the rules governing the referendum, now requires a period of consultation between the two governments on implementation of the result. The process has no timeframe and could take months, or evenyears. If an agreement is eeached, the result can be referred to the national parliament for ratification. In the event of disagreement, Bougainville’s existing autonomy arrangements under the powers of the Bougainville Peace Agreement
will continue.

The PNG Prime Minister, James Marape, has always maintained his willingness to enterinto discussions after the election in good faith. In response to the referendum result, James Marape said that he acknowledged the wish of Bougainvilleans to separate from PNG and that his government has heard their voices.

Indicative of his preference that Bougainville remain a part of the PNG nation, he asked Bougainvilleans to consider a ‘middle’ or ‘third’ way focused on ‘economic independence’ that responds to their desire for self-rule, yet falls short of full independence. Concern amongst watchers of the process is that there may be a return to violence, but many believe that the long history of violence in the country has created a strong will to resolve the status of Bougainville in relation to PNG through peaceful and constructive negotiation.
VICKI LONG

Based on the following sources: the Lowy Institute (article by Kylie McKenna); the Bougainville Referendum Committee website; and a media release from the Australian Foreign Minister.

Born in Mendi with her home town, Ialibu, Melanie has recently moved to Melbourne specifically for rugby after playing the game for fifteen years. Melanie was the first PNG female to play professional rugby in Europe’s elite competition when she joined the top women’s club in France. She has coached the Nauru team as well as being co-captain of the PNG team.

Melanie said: ‘There are few things you haven’t seen before on a rugby field when you’ve had years of playing, so it allows you to keep a cooler, calmer head—and I also talk … a lot.’

She continued: ‘My role is that calm head on field … a lot of talking, I love to hype the girls up and get the best out of them … garnering the players—you know with handshakes, bum taps … talking … being a positive energy.’

Melanie was originally invited by a PNG friend to move to Australia and join the University of Queensland rugby team. Melanie had been a netball player and, having a smaller physique as well as being quick on her feet, meant she could dodge out easily. At the same time, she wasn’t afraid of contact.

She found she enjoyed the strategy of rugby and wanted to be further challenged. The opportunity to play internationally in France, where there was a professional expectation of players, was a totally new experience. Training was constant and having thousands of people watch the games made a difference. This international opportunity, where the grounds were softer and scrumming and maul-outs more regular, diversified and improved Melanie’s game. Then, there was playing with the PNG Sevens and this provided the excellent opportunity of playing in a World Cup.

Melanie has found one of the hardest things is changing the minds of women in PNG— teaching them that the possibilities are unlimited if they take their sport seriously. She recommends joining local clubs, volunteering, watching games and backing yourself.

Asked for the best piece of advice she’s received, Melanie answered that getting in to the game early was important. The other good piece of general advice came from her father who said it was important to build perseverance … if you’re down, to get up again quickly! 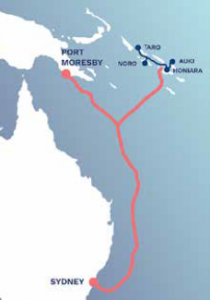 The cable system brings next generation connectivity to the people of PNG and the Solomon Islands with faster, affordable and more reliable communications infrastructure and significant economic and development opportunities.

Two of the most innovative projects in PNG were recognised in November 2019 at the inaugural Innovation PNG 2019 conference.  The Innovation PNG 2019 Conference and Awards is an initiative of the Pt Moresby Chamber of Commerce and Industry and Business Advantage International, and encourages innovation in PNG business, government and organisations.

SP Brewery’s Cassava Project won the Large Organisation Category (over 10 employees).  The project includes the production of cassava for its new alcoholic beverage, Pawa Punch, which is manufactured at its cassava factory at Erap in the Markham Valley.

Sustainable Alluvial Mining Services won the Small Organisation Category (less than 10 employees). This is a non profit organisation established to assist artisanal small-scale miners in conducting their activities responsibly.  It helps government organisations with technical advice and develops policies applicable to the industry, ensuring the sector can be a driver for sustainable rural development.