In 1964 I arrived in the Territory of Papua New Guinea to fly for Trans Australia Airlines (TAA). As I was dual endorsed for flying DC3s and Bristol Freighters and would be of maximum use in Madang, in May 1964 my family and I were transferred from Lae to Madang on permanent posting. We were lucky to be placed in a newly-completed house on the harbour’s edge.

Shortly after our arrival, I noted two yachts occasionally sailing on the harbour. Having sailed for four years at Beaumaris in Australia, the attraction of being out on Madang’s extensive harbour beckoned. How could I get a yacht to use? One of the yachtsmen was the local accountant, Paul O’Hare, and I approached him for advice. My initial proposal was to buy a kit boat, but this wasn’t necessary as Paul told me there was a yacht in Madang available for immediate purchase. 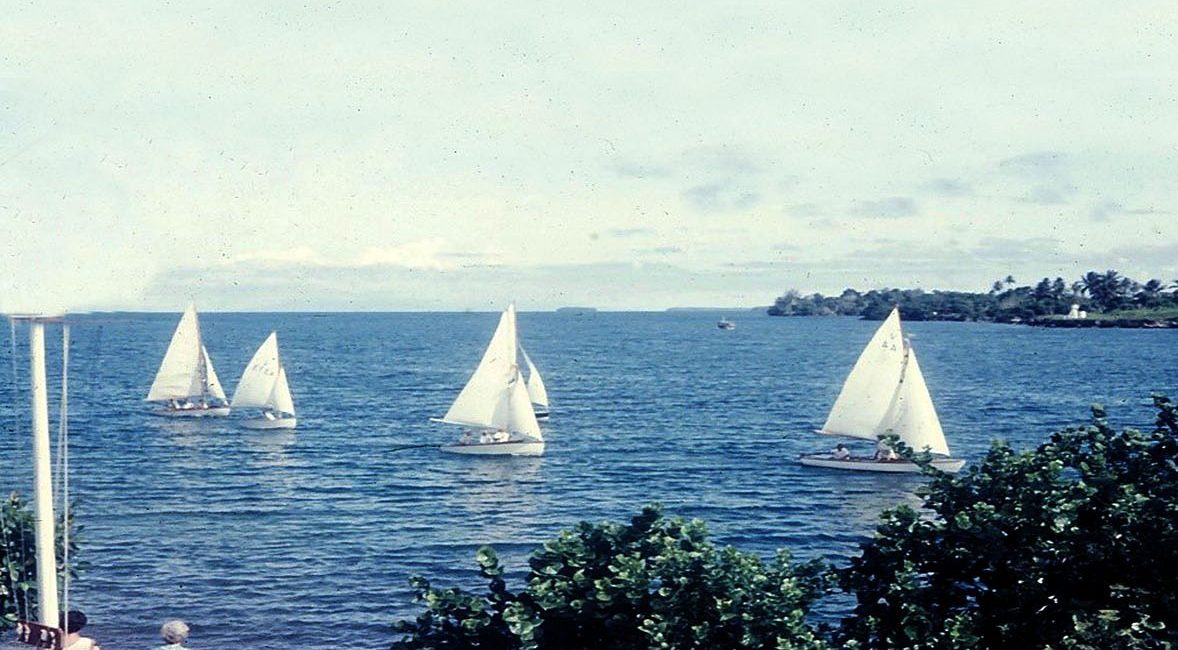 Located on the edge of an inlet was the Mandated Airlines hostel, where Paul showed me a 16-foot Hornet yacht just pulled up near the water’s edge. The rigging seemed complete, the mast and sails were lying on the deck and the entire boat was full of rainwater.

As an amateur boat builder, I was horrified. Fresh water can rot the plywood lining of boats, but I could see it had potential to be dried out and repaired, so I bought the boat and shifted it to the space under our house. The house was built on steel pipes and was elevated about four metres high, so there was plenty of space for my car and the yacht; the first priority was to dry it out.

After some difficult boat building problems, we finally launched the red and white painted boat, with a new name ‘Little Audrey’. When Audrey, my wife, was born there was a cartoon character illustrated in newspapers called ‘Little Audrey’, so the boat name was our joke.

Now full of new enthusiasm I contacted the other two yacht owners, Paul O’Hare and Rom Hemsley, and suggested we organise some sailing races on Sundays. After several social races, we became more serious in competition. I bought three red plastic buckets, filled them with white plastic packing material, attached a line to the handle and anchored them, in strategic spots around the harbour to form a triangular sailing course.

Our yachts, sailing in competition, sparked interest from other residents. Not only Europeans, but also the younger native youths who decked some canoes with a mast and triangular sail. Soon we were approached by other folk with questions about the availability of other boats.

We three discussed the possibility of forming an official Madang Yacht Club, and it was suggested that the meeting be held at the Madang Club.

The first meeting was attended by a very small group, but we did achieve our club formation plan. The Harbour Master, Bill Gibson, was nominated as Commodore, and we decided to claim the equipment left by a previous water-skiing club. The only useful asset we gained here was a floating timber ski jump which, if lowered down flat and supported with empty fuel drums, could be used as a pontoon. 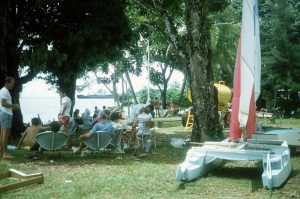 To assist the club, I offered members the use of space below our house to store their boats and I advised them I intended building a launching ramp alongside our house. This ramp project alone took some organising, as the ground level was about two metres above the water level. One Saturday afternoon I hired some TAA employees, who usually loaded our planes at the airport. They dug a sloping ramp about five-metres long down to the water. For the ramp we bought timber from a sawmill in Goroka and I carried the planks to Madang as backload on an empty DC3. We constructed a suitable wooden grid over the ramp. This lasted only a short time, as the tropical teredo worm burrowed into the wood and caused it to collapse. This pushed the members into a working bee to seal the ramp with smooth concrete. One disadvantage of the concrete was the growth of algae, which made it slippery but now, using two rubber rollers, it was easy to launch our yachts.

My next surprise came the following week. The Harbour Master’s boat pulled in alongside the ramp and his crew erected a steel frame designed as a signal mast complete with flag lanyards. This was set up directly in front of the house close to the water.

Our Commodore, Bill, proved to be our club’s greatest asset. As he was a friend of all the regular cargo boat captains, he arranged boat transport, as deck cargo back to Madang, for any yachts we purchased in Lae or Port Moresby.

When anchored in the harbour they were simply lifted off the high boat deck, complete with the trailer by the ship’s crane, and were placed in the water beside the ship. From here I could tow the boat and trailer ashore using the 4 hp Johnson outboard motor attached to the back of my yacht. 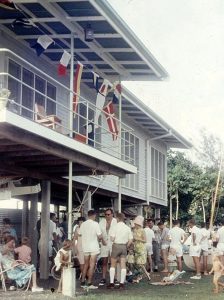 With experience our club progressed. While we boys jousted to win, our wives and partners occupied the balcony of the house to view the activity on the harbour. Fresh roasted coffee beans came, as a continuous gift, from the manager of a coffee plantation who regularly flew with me in the Bristol, on his charter deliveries. At race end, local beers disappeared to expand the discussion. To maintain this supply of beer one of the members would appear mid-week with cases donated by various members. Another gift which we received, in appreciation for the use of our house, was a Noritake dinner set, it was placed in our lounge, on Christmas Day, while we were at church.

On our sailing Sundays, pilots and engineers who found themselves in Madang with free time on their hands, were invited to join in the activity—we taught many beginners to sail a yacht and, after returning to Australia, some pilots purchased their own craft. Some of the yachts they bought were much larger than our dinghies.

A practical way to increase the racing fleet was to build our own yachts. The first was a 14-foot GP class boat, which could be loaned for the day, and a New Zealand designed P type trainer was made, for our girls, by a Dutch carpenter and joiner. Brian and Helen Thirkell produced a Heron and if we needed sails they were ordered from Melbourne. 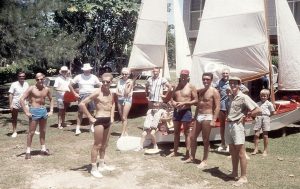 Our yachts were not kept only for racing. The harbour is dotted with uninhabited small islands. A favourite picnic island of the Europeans was Pig Island, one of the outer islands just far enough away from Madang to forget you were living in this different primitive land. At every opportunity, when the children were free of school and I had a day off, we would pack the ‘esky’ with juice and food for a picnic on the beach on this island,

In the past we foreigners had abused the beauty of Pig Island. The clear water just off the beach is littered with broken beer bottles. The children always wore sandals in the water to protect them from the deadly stone fish with the poisonous spines. This also gave their feet protection from the broken beer bottles. In our two years of sailing the harbour on the water, we did not detect any dangerous sharks, crocodiles or other risks. 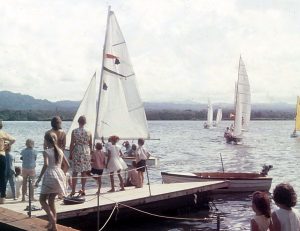 Apart from these minor dangers our trips out there were precious. In the morning we used the outboard motor to drive the boat, as the wind was calm. To return in the afternoon we sailed back on the strong sea breeze, Race day at Madang Yacht Club usually flying the spinnaker. We enjoyed these times on the island with our families. As the charter flying continued every day, even Sundays, on occasion, a Bristol Freighter would come low over us and a roll of toilet paper was thrown, streaming, out of the front window in our direction. I suspect the pilot, with the sense of humour was John Guggenheimer, a member of our club.

Now having a respectable fleet of yachts, on New Year’s Day 1965 we invited the Madang District Commissioner to officially receive the sail past and present our trophies. With his acceptance, our club came of age. Thirteen yachts sailed in line for the occasion. Our eight-year-old daughter Alison brought up the rear of the line of yachts sailing our small P type trainer.

This wasn’t an aviation club; I was the only resident pilot involved, and the members’ skills included medicine, boat engineering, retail and one was a Dutch coffee plantation manager. All had stories to tell at our dance parties and other social interchange activities. The floating pontoon, anchored just off our ramp, became a dance floor for our parties. 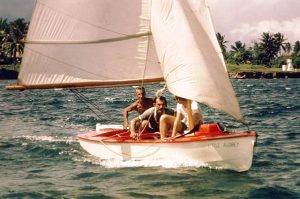 Ron and crew in the Hornet ‘Little Audrey’

Eventually, time caught up with us. I was notified of my ‘go finish’ date. The replacement pilot, planned for Madang, requested we remove the boats and so we needed a continuity plan. A lease was obtained for a small waterside block; this was close to the Harbour Master’s base. I suspect Bill Gibson had a hand in this. A local builder completed a row of carport-like garages for the boats, and a clubroom; and this became the Madang Yacht Club. The following Easter, 1967, Audrey and I were invited back to Madang, as the official guests, for the opening of this new clubhouse. It had been built after Audrey and I returned to Australia.

We did attend this opening and returned to Melbourne with a feeling of satisfaction that all our early efforts had been rewarded.