The family’s two-year adventure in the early sixties travelling through Europe and working in the UK and Canada had fuelled June’s desire to explore other countries. In 1972 she had an opportunity to visit the People’s Republic of China with a group of academics from the University of Sydney. Earlier that year President Nixon had visited China ending years of diplomatic isolation between the two countries. In Australia, the Liberal/National Party coalition had been in government for 23 years.

The travel group was to leave just prior to a federal election and June was informed that, if she visited China, on her return she might have to find a new job. But the election saw the ALP, under Gough Whitlam, sweep to power and June’s group, the only Australians visiting China officially at the time, were fabulously wined and dined by their hosts! In 1977, towards the end of the Cultural Revolution, June visited China again, leading her own group of educationalists and friends on a three-week tour. This was an exciting time as foreign visitors to the country were still very rare. 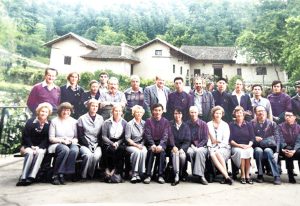 During her time in Sydney and in between her travels abroad, June wrote several historical studies and for ten years was a valued historical consultant for Old Sydney Town. She also managed to research, write, and publish three historical novels based on her ancestors—‘convict extraordinaire’ Henry Kable and his wife, Susannah Holmes, who came to Australia on the First Fleet. Academically, she found the time and energy to co-author with Noel Gash A Pictorial History of New Guinea and co-edit with Noel Gash, John Hookey and R Lacy Documents and Readings in New Guinea History (Pre-history to 1889), the first publication by a group of ASOPA staff. Charles Rowley commented in his foreword:

It was fitting that it should be this impressive collection of New Guinea documents and materials. Such a collection has long been required.

Throughout her life, June’s devotion to her work was supreme and she was held in high esteem by her colleagues and students, as evidenced by the many emails Kristian received after her death. One read: 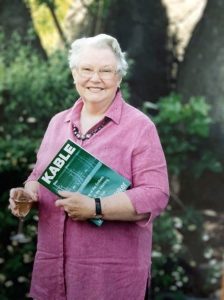 Along with Noel Gash, June was my favourite lecturer at ASOPA. She had a motherly and caring nature, but a businesslike approach which captured this 19-year-old in 1970. I still have my Gash and Whittaker publication, A Pictorial History of New Guinea. Fifty-one years later I still hold clear visions of June lecturing in history to the 1970 First Year Arts Class.

I remember June well—hated history at school—loved it at ASOPA. June was our mentor on our practice teaching trip to Port Moresby. She was a real hit with the local teachers where we were staying. Great lady who would turn heads wherever she went. John Beagly used to love doing caricatures of June. Love to be transported back to 1970—great times!

I loved June’s PNG history lectures and she, together with Noel Gash, set me on a course to be an historian, although not reaching her class. I admired and respected her especially as she modelled what an engaging and professional teacher should be like. Those happy years at beautiful ASOPA were, like for so many of us, transformative in my life—thanks to people like her and Maurie Saxby and so many others.

After their retirement in 1993, June and Merv purchased the home block of Merv’s grandparents’ property, Fairview. They set about designing and building a home and buying a light plane, for which they built a shed to house both it and themselves during the build. While living in Sydney, apart from his teaching career, Merv had kept up skills learnt in the Air Force and taught flying at Bankstown Airport. He prepared a section of sloping land beside the house as an airstrip, the kind where you get one chance, and one chance only!

By the end of 1994 they had taken up residence, June had learnt to cook and fill the freezer with stand-by meals for unexpected guests or needy locals, and the pantry with homemade jam; Merv had set up beehives and honey extraction equipment, and a chook house. Geese, being kept in order by Blixen, their beautiful black dog, rambled the lawns. They spent any spare time flying up and down the countryside to visit friends, family and attending ASOPA reunions! 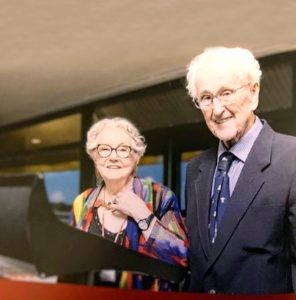 June with Merv at ANZAC Day

June plunged into Tumbarumba life with her usual gusto founding, with other like-minded citizens, the Friends of the Library group, which set about saving the Tumba Library from closure by the then council. Together with two other ‘activists’, whose names also began with ‘J’, they became known as the ‘Triple J’s’, being regarded by the council as a true force to be reckoned with.

She contributed to the activities of the CWA and the Rosewood Friendship Group, organising the annual two-up game each Anzac Day. Having loved music from a young age and being an accomplished pianist and able to play by ear, June was a popular performer at Tumbarumba’s nursing home, playing for weekly sing-a-longs for several years. Later she learned the flute and chanter for the bagpipes and joined Tumbarumba Pipes and Drums, playing at the Tumbarumba Show and other events.

Always the consummate writer, nothing changed in retirement. In the words of her daughter Ingrid:

I can quite clearly recall, as a teenager, the constant clatter of her typewriter, ceasing only for her to pass comment on something of interest, or to take a quiet sip of scotch placed conveniently within reach. She was either preparing lectures or programs, drafting novels, penning helpful advice to politicians, venting her wrath about their stupidity, or simply writing letters to friends, something she did all her life.

June joined the local writers’ group and helped write and publish a series of three books, The Elders of Tumbarumba, and in 2007 June and a relative, Paul Kable, published Damned Rascals?, which retold the story of Henry and Susannah Kable using primary sources collected in the UK and Australia. 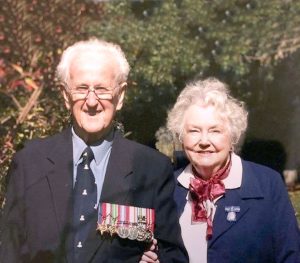 She continued to write, entering the Elyne Mitchell Writing Awards for short stories, and was shortlisted in 2016 for her Heineche’s Pub, and in 2017 won the Local Award category with The Man Who Spoke to Bees, based on a friend and ardent beekeeper she met in Europe, Phillip Sharpe.

Her latest historical novel, When Only the Moon Rages, is awaiting publication. It is based on the journey of several locals who find their way to Tumbarumba through various countries of war-ravaged Europe during World War II.

June and Merv spent the last 25 years of their marriage at Fairview, a marriage just three weeks short of 67 years, constantly and happily surrounded by good friends and growing family. In 2008 her daughter Ingrid, with husband Alan, moved from Kurrajong to their property, Burradoo, within sight of Fairview, and thereafter began a regular stream of grandchildren and great-grandchildren visiting ‘Girl Gummy’ and ‘Boy Gummy’. June’s son Kristian, with wife Song Yang and children, often came to stay from their home in Canberra.

In 2009, in recognition of her work at ASOPA/ITA and her contribution to her local community in retirement, June was awarded the Medal of the Order of Australia. The citation reads

For service to international relations in the Pacific region through education, training and development in the field of public administration, and to the community.

After Merv died in 2019, June continued to live at Fairview until her final five months when she decided that she should live with Ingrid across the creek at Burradoo because, as she suggested, that was  where she could have the best of both worlds—family and friends could stay at Fairview, while she could be good company for Ingrid after Alan had died suddenly in October 2021.

June was the life of the party, hosting a memorable Christmas for family and friends at Fairview in 2021. She followed this by thoroughly enjoying a week’s holiday with Kristian and his family at Merimbula in January.

June was a great gatherer of friends and family. To use Ingrid’s words:

I often thought of Mum as a Queen bee, Queen June. She drew those who stimulated her intellect to her hive where she entertained them with her dinner extravaganzas, engaging conversations and free-flowing wine. As I grew up our family home, no matter where we happened to be living, was constantly filled with June’s and Merv’s friends, students, and colleagues. Debate was intense, laughter prevalent and singing raucous accompanied by June on the piano. She was fiercely loyal to her friends and would keep in close contact with them, remembering their birthdays and other special events in their lives. She was the sharpest tool in the box, often leaving me floored at how good her memory was.

June’s life and contributions were remarkable—full of rich experiences. She was an extraordinary person, wonderful mother, grandmother and great-grandmother, and friend, who touched the lives of so many with her vibrancy, compassion, thoughtfulness, and intellect.