John Francis Jackson was a father that his two children, Patricia and Arthur, never knew. John was the eldest of six children and purchased a sheep grazing properly at an early age at St George in Queensland.

At 26, he purchased his first plane, an open cockpit monoplane, which he used for stock and property inspections. This involved landing the plane wherever he could put down, as there weren’t many airfields in those days, and he soon earned the nickname ‘Claypan’.

Later, he purchased a Beechcraft Stagger-wing biplane, which had a greater range and passenger capacity. Incidentally, it happened to be faster than any single engine aircraft in the air force at that time.

Aged 30 and still unmarried, he went on a two-week cruise to New Zealand where he met an Irish girl, Betty Thompson, who was doing a round cruise from England chaperoned by her aunt. The couple fell in love. But Betty was soon to return home to Ireland, so he pursued the ship to Adelaide in his plane and persuaded her to marry him then and there, leaving Aunt May to sail home alone and face the wrath of Betty’s father in Dublin. Betty did not see her family in Ireland for another nine years. They settled down on his sheep property near St George. A daughter, Patricia, was born in 1939 and a son, Arthur, a year later.

Within a month of the declaration of war in 1939, John joined the RAAF as a Pilot Officer and commenced a year of training, mostly in Wirraways at Archerfield. The RAAF, desperate for men with flying experience, was prepared to overlook some physical disabilities like John’s poor eyesight.

He saw little of his family though he was able to keep a Beechcraft at Archerfield and fly to St George whenever possible. In October 1940 John was posted for a year to No 3 Squadron in the Middle East; this is where he earned the Distinguished Flying Cross.

He was posted home in October 1941 and probably thought that the war was over for him. He was given three weeks’ leave with his family, but during this time the Japanese attacked Pearl Harbor, so he was sent to Point Cook, Victoria, to train new pilots, something he hated after the excitement of being in an operational squadron—also because he was once again far from his family. John was moved to Canberra in January 1942 for more instructing.

Rabaul was taken, Singapore fell, Darwin was bombed and John and his mates were soon learning to fly newly-arrived American Kittyhawk fighters, which were to be the basis of Australia’s air defence against a Japanese invasion. Three Kittyhawk squadrons were hastily formed in Townsville and John was given command of the first, No. 75, manned mostly by pilots with no combat experience and about ten years younger than John. He soon became known as ‘Old 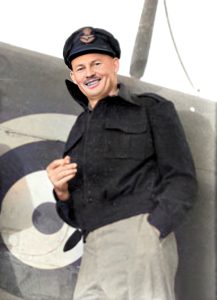 John’. Another pilot in his early thirties was nicknamed ‘Grandad’.

In less than a fortnight, 75 Squadron was in Port Moresby, which was being bombed almost daily by Japanese aircraft flying from Lae and Rabaul.

John’s brother, Les, who had been with the RAAF in Singapore before it fell, joined him in the squadron. A day after arriving, they launched a surprise low-level strafing attack on the Japanese-held airfield at Lae, destroying a number of aircraft on the ground. It was extremely low level; one Kittyhawk clipped the propeller of one of the Japanese planes, which were foolishly lined up in neat rows beside the airstrip. The attack caused such confusion on the ground that the Australians were able to do a second run before heading home.

Conditions at the Port Moresby airstrip were primitive with no proper toilets for the men, and a serious risk from malaria and dysentery.

For six weeks, the action was intense, with air battles occurring regularly. The Australian pilots soon learned not to dogfight the Japanese Zeros, as they were superior in manoeuvrability, though not in speed or toughness, to the Kittyhawk. The Japanese pilots were also very experienced in combat. The Australian tactics were therefore to get above the Zeros, make diving attacks on them, and use their superior 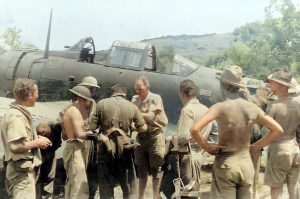 Squadron Leader John Francis Jackson, No. 75 Squadron, RAAF confers with others in front of a US Air Force Douglas A24 Dauntless dive bomber, in which he had returned to Port Moresby after a walk through the jungle, after he was shot down into the sea by three Japanese Mitsubishi Zeros

speed to get away.

One day, John flew over to Lae alone to do some reconnaissance but was jumped by two Zeros. With his aircraft on fire, he managed to land it in the sea and struggle free before it sank about a kilometre offshore. John shed his flying boots and swam towards a village (Busama) stopping at the mouth of a creek to rest near a floating log. When the log turned out to be a crocodile, he found new strength to get ashore.

There, at great risk to their own lives by the Japanese, two New Britain boys offered to guide him to safety. So began a ten-day walk over mountains and through rugged jungle to Wau, from where John was flown to Port Moresby. His ordeal was not quite over, as the plane carrying him was attacked by a Zero just before landing, and a bullet took the tip off one of his fingers.

During his walk to safety, he had managed to keep a diary using a pencil and scraps of paper and this diary has been published in many magazines and books over the years.

The squadron’s elation at having their leader back was to be short-lived. Over the previous months they had lost seven pilots killed in action, and all but five of their Kittyhawks. Illness from malaria and dysentery had also taken its toll.

Four days after his return, John led the five aircraft against a superior force of eight bombers escorted by 11 Zeros. Unable to gain sufficient height, they attacked the bombers from below, but the Zeros came down on them and after a furious dogfight, John and another pilot were shot down and killed.

A few days later, only one serviceable aircraft was left and the squadron withdrew to Australia. Later that year the Seven Mile Aerodrome, from which they had operated, was renamed Jackson Field in honour of John. Today it is Port Moresby’s International Airport.

The squadron regrouped at Kingaroy and, under my Uncle Les Jackson’s command, did a terrific job supporting the Australian ground forces at the Battle of Milne Bay, then went on to pursue the Japanese up through the islands until the end of the war. u

Editor’s Note: This story was published in PNGVR’s Harim Tok Tok, February 2022, and is republished here with permission of the president, Phil Ainsworth.