Part Two of my story described my move to Gumine and the living conditions and lifestyle there. This part describes my work assisting locals in the growing of their crops.

MY MAIN FOCUS AT GUMINE was to increase

the production of pyrethrum, following the process used on my initial patrol out of Kundiawa. We would go from garden to garden, spending perhaps half to three-quarters of an hour with each grower showing them what to do and seeing that they did it correctly. This would go on for four or five days in different areas then we would return to the original group to see how they were going. The women and old men were generally the most reliable when it came to sticking at the task, the younger men having a tendency to get diverted more readily. The pyrethrum growing areas were in pretty rugged country; it was not unusual to spend two or three hours walking between villages and go up or down a couple of thousand feet in the process. Needless to say, anyone working in this area got pretty fit very quickly.

The purpose of introducing pyrethrum was to provide a cash crop in areas where coffee could not be grown successfully. We used to buy the dried flowers on the roadside once a week and then bale it up (200 lb bales) for transport to the extraction plant in Mt Hagen. From time to time neither of the two short wheelbase Land Rovers or Massey Ferguson 135 tractor and trailer on the station was available so I would have to jump on the station motorbike (a Honda 90) and travel the twelve miles west of the station to where most of the pyrethrum was grown to let the growers know that we would not be able to buy plaua (flower) today. This trip was fine in dry weather but could be quite challenging—in fact nigh on impossible—after heavy rain, but we always tried to get the message out as early as possible, as many of the growers had to walk quite long distances to the buying points. If we were early enough, we could save them quite a walk as someone was always available to bikmaus (shout) the message. Growers who lived beyond the nearest valley had to rely on the message being relayed from ridge top to ridge top. The road east of the station went for about twenty miles before we had to resort to walking, but the altitude here was generally lower than to the west so not much pyrethrum was grown, although there was plenty of other work to do in this direction. 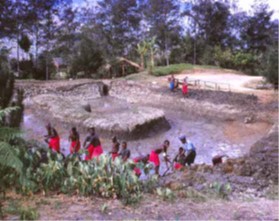 The financial rewards for pyrethrum growers were not great: the price at the time was fifteen cents for one pound of dried flowers and it took about 3,000 flower heads to produce this amount, hardly a great reward for effort. In most cases, though, the growers did not have much in the way of alternative sources of cash income. The local people were, however, well aware of what coffee growers could get for their produce and there was always someone ready to point out the relative returns for a given volume of both crops. At twenty cents a pound, coffee was obviously somewhat more attractive but it was volume, not weight, that these people used as their criterion for comparison and there was a huge difference in what they would get for a bag of very light dried pyrethrum flowers and the much heavier same bag of coffee parchment beans. Trying to explain the discrepancy was always an interesting challenge—and not one in which we always succeeded.

Coffee had been introduced some years earlier and had proved to be quite successful. In the Gumine sub-district alone, for example, seventy-five tons of parchment coffee had been bought by the local cooperative, the Kundiawa Coffee Society, in 1965–66. By the mid-1960s, however, coffee was in over-supply on international markets and export quotas had been imposed on producing nations under the World Coffee Agreement. As a result, Department of Agriculture, Stock and Fisheries (DASF) field staff were instructed not to encourage further plantings, although they were still expanding.

Having encouraged growth of the industry just a few years earlier, though, we could hardly turn around now and not support what was already there. So we did help coffee growers with basic crop husbandry such as instruction in pruning and shade management. It was interesting trying to communicate the benefits of pruning; how could less foliage possibly produce more coffee? We also helped out with how to process the freshly picked coffee berries more effectively—pulping the berries, including helping with the purchase and setting up of hand pulpers, fermenting and drying. 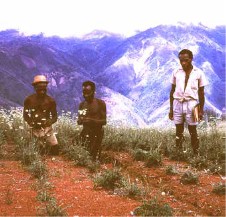 As was the case throughout the Chimbu District, the most heavily populated region of the country, land was at a premium in the Gumine area but cattle projects were still popular. A group would generally pool its resources and once they had sorted out amongst themselves the issue of usage of the land we would help them buy the necessary fencing materials, assist with putting up the fences and yards, planting some improved pasture species (Elephant Grass and Setaria) and stocking the project with a few head of cattle. Providing basic veterinary services was also part of the support we provided.

Chickens were also very popular so we sold these to the villagers whenever we could. The supply was never enough to meet demand though so after a while we started to breed some of our own on our newly acquired banis didiman (the ten-acre DASF block alongside Omkalai airstrip). Another bit of protein in the traditional low-protein diet of the locals, although rather than it being a regular dietary supplement consumption tended to be limited largely to singsings (ceremonial gatherings) when cattle also fell victim to the ‘butcher’.

We also stocked the station ponds with golden carp and as these bred up were able to distribute some fish to the local villagers. They were in great demand, largely for ornamental purposes but our hope was that they could in time provide a further boost to the protein intake of the locals, notwithstanding the fact that carp taste like mud.

Inevitably, a certain amount of office work had to be undertaken but it was not an onerous chore. A daily Field Officer’s Journal (FOJ) had to be submitted at the end of each month, half a day a month usually saw the general monthly report completed and a monthly financial return usually took less than an hour. In addition, records of all pyrethrum purchased had to be maintained as well as attending to the usual correspondence. Quarterly work plans and budgets also had to be prepared. 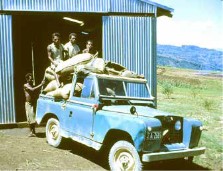 While at Gumine in mid-1967 I was seconded for about seven weeks onto a major pyrethrum ‘push’ in the Western and Southern Highlands. Additional DASF staff were brought into the area to give production a big kick along. Unlike the rugged Chimbu District that I was used to, the area that I was given between Mt Hagen and Tambul had some fairly extensive areas of relatively flat land and I was given responsibility for trialling mechanised preparation of the ground for planting. I believe this was the first, and perhaps only, time this approach had been used. Whereas I had previously worked on plots as small as one-tenth of an acre, often on the sides of hillsides, now I was dealing with five or six acres at a time with a tractor and plough. Progress was certainly faster and a lot of acres were planted up to pyrethrum in my time there but there was also a lot of downtime with the tractor often getting bogged in the heavy, damp black soil. A crawler tractor may have been a better option in the circumstances. 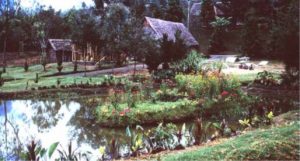 By the end of November 1967, I had completed my first term of twenty-one months and it was time to head off on three months leave. A posting back to Kundiawa awaited me on my return so I packed up my worldly possessions, now vastly expanded to include a dinner set (Royal Doulton no less, which I seem to recall was all that was available at the Buntings store in Goroka at the time), basic cutlery, pots and pans and a record player with a selection of records. Surely, I was becoming quite a ‘catch’—but that’s another story!