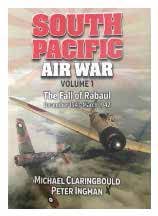 This book which covers the critical early months of the Pacific War is the first of three chronicling aerial warfare in the South Pacific. It focuses on land based aviation of the Japanese and Allies which greatly influenced the strategies of opposing sides leading into the May 1942 Battle of the Coral Sea. Air operations by both sides became a daily occurrence. As Imperial Japanese Navy flying boats and land-based bombers penetrated over vast distances, a few under-strength squadrons of the Royal Australian Air Force put up a spirited fight. However it was the supreme power of aircraft carriers that had the biggest impact. Four Japanese fleet carriers facilitated the capture of Rabaul over a devastating four-day period in January 1942. The following month, the USS Lexington’s fighter squadron VF-3 scored one of the most one-sided victories of the entire Pacific War. By March 1942 the Japanese had landed on mainland New Guinea, and the scene was set for a race to control Port Moresby.

This is the full story of both sides of an air war that could have been won by either incumbent, but for timing, crucial decisions and luck. The book is logically structured and easy to read assisted by its maps, photographs and appendices. It provides fascinating insights into this early period of the war when Australians felt a sense of hopeless inferiority in numbers and equipment.

The author’s smooth blending of material from Japanese and Allied records gives its story balance and completeness. The surprise was the detail, particularly of land operations, which the reviewer had not previously read, although the lack of referencing was an issue to the reviewer. Much new material is presented, for example in the chapter covering the feint of the US carrier, Lexington towards Rabaul from the east on 20 February 1942. Although the result went badly for the Japanese it could have just have easily gone the other way, which would have disastrously removed the Lexington from the May Coral Sea Battle.

This is a wonderful read for those interested in aerial warfare and a must read for anyone interested in this period and sector of the Pacific War. The volume covers much more than the air war. The appendices showing aircraft losses and aircraft profiles and characteristics assist the reader to understand the conclusions reached by the authors. The authors are congratulated on the readability and clarity of this publication and the reviewer is eagerly waiting for the publication of the following volumes of this trilogy.

Michael Claringbould, author and illustrator, was raised in Port Moresby in the 1960s, and became fascinated by the many Pacific War aircraft wrecks in PNG. He has helped with finding and recovery of aircraft in PNG and has assisted both US and Japanese Governments in identifying missing aircraft and crew. Michael has served widely overseas, including South Pacific countries, as an Australian diplomat. He is contributing editor to Flightpath magazine and has written books, more recently a widely acclaimed history of the Tainan Naval Air Group in PNG, Eagles of the Southern Sky. He is a member of Pacific Air War History Associates, holds Australian pilot’s and PG4 paraglider licences and is a skilled digital 3D aviation artist.

Peter Ingram is an aviation historian and author specialising in the early stages of the Pacific War. Two of his books Zero Hour in Broome and Carrier Attack Darwin 1942 have been favourably accepted.    A former business man Peter has travelled widely throughout northern Australia and the South Pacific. He is Chairman of the South Australian Aviation Museum History Group.

Description: As part of the Australian Army History Series, Guarding the Periphery is the published research by Dr Tristan Moss into the Australian Army’s involvement in the development of the defence capability in the Territory of Papua and New Guinea, with focus on the Pacific Islands Regiment, from 1951 until Papua New Guinea’s Independence in 1975.
Reviewer comments:
Dr Tristan Moss has undertaken an impressive and detailed research into the engagement by the Australian Army in the development of a unique defence capability in the Territory of Papua and New Guinea (TPNG). The force structure accorded with the Army’s northern defence postures during the post-World War II, Vietnam War and pre-Independence eras of Australia’s relationship with the Territory from 1951 to 1975. It has been a missing chapter in our military history.
Moss acknowledges that there were other Australian Navy, Army and Air Force deployments in TPNG during this period, which in turn contributed to PNG’s defence capability prior to 1975. He contends that it was the Pacific Islands Regiment (PIR), which more clearly reflected the Army’s mission to develop a land defence capability that met both the priorities for Australia’s national interests and the anticipated national interests of the emergent Papua New Guinean nation.

Guarding the Periphery records that the soldiers of the PIR and other Australian Army units in PNG were employed by the Australian Army, initially under Northern Command (Queensland and TPNG), until the formation of a specific PNG Command in 1966. They represented ten percent of the Australian Regular Army by 1972, at a time when Vietnam had been a priority for frontline troops. Moss has, through his access to Army records and files, been able to virtually put the reader in the room with the decision makers of the time. This adds to the understanding of how decisions were made about the development of the PIR force structure and the importance of improving the calibre of Australian Army officers and NCOs posted to the PIR’s 1st and 2nd Battalions.

Through personal interviews with many former national service teachers/instructors, Moss has recorded their significant contribution to the education of the PIR soldier. There were some forty Chalkies deployed annually across the major bases in Port Moresby (Taurama, Goldie River, Murray Barracks), Lae and Wewak from 1966 to 1973. By generating an enthusiasm for education, the Army was able to activate advanced training and promotion within the PIR, which in turn, paid dividends in preparing the force structure for localisation.

Of particular note is the author’s devotion of an entire chapter to the “Black Handers”. The true origin of this term, formerly known as “blackhanders”, was that if you served in PNG (and could therefore speak fluent Tok Pisin), you were figuratively “marked with the black hand”, which meant your personal file was so endorsed as a likely candidate for a second posting to PNG. The term fell out of use by postings officers as the numbers of candidates diminished over time. Some thought the term to be politically incorrect but such terms of self-identification and distinctiveness are replete in military history and should never be obscured.

The Black Watch is a term used to identify the 3rd Battalion of the Royal Regiment of Scotland. The Black Hats was a term used to identify the Union Army’s Iron Brigade in the American Civil War, due to their wearing of the distinctive black hardee hat. The Patrons of the PNGAA and the PIB-PIR Association are both Black Handers and the term stimulates fond and humourous memories of Army service in PNG.

With the publication of Guarding the Periphery, Tristan Moss has accomplished the essential military context for the Australian Army’s involvement in Papua New Guinea in the lead up to Independence in 1975. The remainder of the pre-Independence and post-Independence military history is not widely known so this book adds significantly to the history knowledge of military staff in both Australia and Papua New Guinea.

Lynette Arden / Travelling Through the Unexpected

Available through Ginninderra Press: https://www.ginninderrapress.com.au
Also available through on line bookstores such as Booktopia, Book Depository, Fishpond, and Amazon in hard copy and eBook versions. 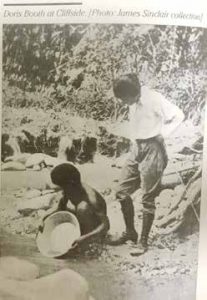 Brisbane Houses with Gardens by Beth Wilson published in 2017 is about historically interesting houses in Brisbane. I purchased a copy as our family home (59 Heath St East, Brisbane) KITAWAH or WEWAK was featured.
Then on going through it I found an article about a block of apartments ‘Cliffside’, which had been built in 1936 for the remarkable PNG identity Mrs Doris Regina Booth OBE. As a young boy, I admired her building and beside it the Lamb Family mansion at Kangaroo Point overlooking the Brisbane River towards the Botanic Gardens.

I knew a little about her famous gold mining history around the Wau gold fields and it intrigued me as to how she had found the time to build such an early trendsetter and how she recognised the potential of the river for upmarket accommodation. Now of course apartment buildings now line every reach of the River.
The book offers a meticulous, illustrated look at Brisbane  houses.