Myth and magic: art of the Sepik River, an exhibition of over 80 impressive works of art, opens on 7 August 2015. It includes art from communities of the lower and middle Sepik River, the Murik lakes, the Blackwater and Korewori, distinguished for their visual arts.

Many of the exhibits were collected from 1914 to just before World War II. During and after the upheavals of the early twentieth century, the region’s communities continued to practise many of their art traditions.

The art of the region is bewilderingly inventive. Materials including pig tusks; feathers; shells; clay; human bones, hair and teeth; wood; fur and skins; fibre and a vibrant palette of ochres  are used. Although the artists used the resources they had at hand, they did not always  restrict themselves: materials obtained from trade was incorporated into their work.  Reckitt’s Blue (the blueing agent) was particularly sought after, as was red paint.

Stone-bladed adzes were used – and were still in use as late as the 1960s – to fell trees and  rough out blocks of wood for masks or spirit figures. More detailed work was done with wooden mallets and blades hafted to form chisels. A tooth of a pig, rat, flying fox or other  mammal was hafted to create a fine engraving tool. Slivers of bamboo, the sharp edges of certain shells and pig tusks were used to scrape and smooth the surface of wooden objects.

The particular tools used can be discerned in the subtle effects upon the surface of a figure or mask. There is less visual rigidity than when metal tools are used; the designs are more fluid  and sculptural volumes seem more organically expressed. 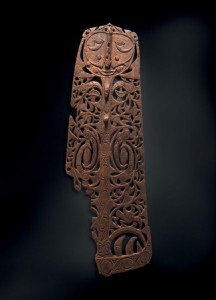 Aside from the immense skill and intimate knowledge of materials that all Sepik River carvers attain, there are ritualised rules of conduct that must be followed when making important  objects. These vary depending upon the religious or magical significance of the object created and differ from community to community. Observances included sexual abstinence, food taboos and working in secrecy at a secluded place away from the village  and the eyes of the uninitiated.

Each community has its own artistic cannon, history and cosmology. According to an origin  myth of the Iatmul people, the world was created by a primordial crocodile that swam everything into being. Floods are the crocodile settling down into the waters as the land and the crocodile’s back are one and the same and earthquakes are signs that the crocodile is moving. The jaws of a crocodile symbolically represent the worldview: the upper jaw is the sky and all within it and the lower jaw is the land and the river and everything on or in it.

The saltwater crocodile is the most revered and respected inhabitant of the Sepik, perfectly adapted to the environment, it is a neighbour of which to be wary. Understandably, the crocodile permeates the myths and legends and art and architecture of many Sepik  communities. 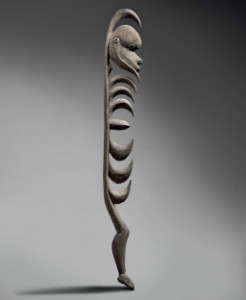 Sculptures of crocodiles, such as the 6.3 metre long spirit crocodile figure from the Korewori River on loan from the Papua New Guinea Museum and Art Gallery, can be larger than life size. Every village has at least one ceremonial house, Haus Tambaran, that is the centre of all political and religious activity. These majestic buildings are supported by giant wooden posts  spectacularly carved with clanassociated figures, animals and overlapping patterns. Ritual objects, such as ancestral figures, masks, and other important items are stored in the  concealed upper chamber of the house.

The ceremonial house is where youths are initiated into manhood. Initiates are kept in  seclusion for months while being instructed in arcane knowledge and receiving scarification marks to the back and chest. These marks are one of the most spectacular forms of indigenous body art still practised. The scar patterns symbolise the teeth marks of the
ancestral crocodile, which has devoured the initiate, transforming him into a man, and a warrior. 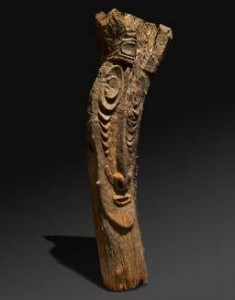 Life along the Sepik continues much as it has done for centuries. Cooked sago is still a staple food and the ubiquitous dugout wooden canoes continue to be made and used for travel and fishing. Communities still have a strong sense of identity defined by pre-Christian myths and oral histories, and continue the traditional cycle of events such as initiations and, to a lesser extent, the creation of extraordinary ceremonial arts.

Myth and magic: art of the Sepik River provides a rare opportunity to encounter masterpieces from the Sepik, works that speak of a time and a place where spirits and ancestors were integral to daily life.

The National Museum and Art Gallery of Papua New Guinea has generously lent five of its masterpieces, but most of the works come from the exceptional collections of Australian museums and art galleries, and many have never been shown before.