The following was prepared for the 30th Anniversary of PNG Independence booklet produced by the Papua New Guinea Association of Australia Inc – with special thanks to Ross Johnson. 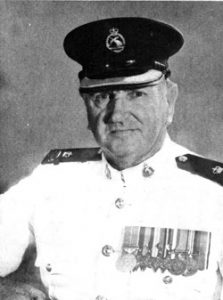 Thomas Shacklady MBE, the composer of the PNG National Anthem “O ARISE ALL YOU SONS OF THIS LAND” was born in Gateshead, County Durham, UK, in 1917.
Enlisting in the Royal Marines in 1935, he subsequently became a musician studying for two years at the Royal Marines School of Music (Deal, UK). Tom was proficient in playing Brass, the Flugelhorn, Trumpet, Trombone, French horn and Percussion instruments. He was also an accomplished Violinist.
Tom saw service during World War 2 on a variety of Royal Navy ships in various locations. He survived burns from a torpedo strike on HMS Cleopatra and the sinking of HMS Penelope by a U-boat. Post World War 2, he enlisted in the Australian Army in 1951 and served in and trained various bands, including a posting to PNG in 1957. In 1964 he was appointed Bandmaster of the Royal Papua New Guinea Constabulary band with the rank of Inspector. Under his direction, the Band toured Australia, New Zealand, United States of America and SE Asia. In 1970, the Band performed at the Edinburgh Military Tattoo.

However, Thomas Shacklady will always be remembered as the winner of a competition conducted in early 1975 for a National Anthem, writing both the words and music to “O Arise All You Sons of This Land”. After an illustrious career in PNG, the much decorated Chief Superintendent Thomas Shacklady, MBE, retired in 1982 to Australia. Sadly, he passed away on 22 January 2006.

Bandmasters of the RPNG Constabulary Band (all from the UK):
1. Inspector David Crawley
2. Superintendent Thomas Shacklady
3. Superintendent William Harrison
4. Superintendent Keith Terrett
The present incumbent is –
5. Chief Inspector Palo Walo, MBE. Palo is the first PNG citizen to hold the post and he also received training at the Royal Marines School of Music in Deal, UK.

Further details in this PDF File: