Volcanic eruptions have long fascinated people. Almost everybody knows something about the 1883 eruption of Krakatau (Indonesia), commonly regarded as the biggest during the last few hundred years. Such knowledge stems from detailed field investigations by a Dutch geologist published in 1886, a Royal Society of London compendium (1888), a number of popular accounts, the deaths of some 36,000 people, mainly at the hands of the ensuing tsunami, the rapid spread of news of the calamity on the telegraph, and the subsequent brilliant optical effects observed all over the world. The newspapers and scientific journals of the time were full of items concerning the eruption as returning sea captains, ministers of religion, and natural historians reported their observations. Even Alfred, Lord Tennyson was inspired to begin his poem St Telemachus:

Has the fierce ashes of some  fiery peak
Been hurl’d so high they ranges about the globe?
For day by day thr’o many a blood-red eve, ……..

Although the 1883 eruption of Krakatau has captured the public attention as the great eruption there are, in fact, numerous contenders of the title. The eruption of Tambora (Indonesia) in 1815 produced more volcanic ash than did the Krakatau eruption and resulted in deaths of over 90,000 people, primarily because of starvation. The AD 79 eruption of Vesuvius entombed the Campanian towns of Pompeii and Herculaneum, and produced the largest literature on the effects of an eruption as well as one of the World’s great tourist attractions.

More than 300 years ago, a massive volcanic eruption caused darkness to fall over most of the highland provinces of Papua New Guinea. This brief event in PNG resulted in a multitude of legends that describe a “time of darkness”.

Early missionaries and anthropologists gradually began collating legends from areas that had no history of any relationship with each other, different terrains, languages and tribal wars meant that each legend was very parochial, yet when the stories began to emerge after colonisation and pacification amongst the various tribes there was an amazing similarity between the legends. They all described a time of darkness lasting one or two days, when sand fell from the sky and destroyed gardens and people and animals.

It is also interesting to note that the famous Russian Naturalist, Nicholay Mikloucho-Maclay, who first settled in 1971 at Gorendu Village on the Rai Coast of Madang, was made aware of the time of darkness. His diaries, again supporting the same basic information from the legends documented by early missionaries and anthropologists, based throughout the Highlands of PNG including Mt Hagen, Wahgi Valley, Tari, and Wapenamanda. It was the consistency of this information that bought about intrigue and ultimately the need to further research the extent of this massive eruption. 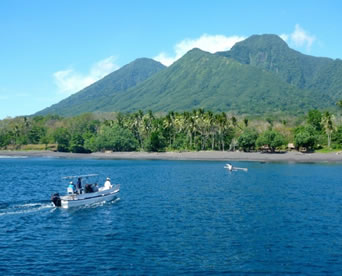 It is easy to sit back today and read the work done by many internationally acclaimed anthropologists, geologists, archaeologists and volcanologists having been able to identify that the eruption occurred on Long Island 70 miles east of Madang and 30 miles North of Saidor.

Professor Russell Blong has written many papers and a book based on the Long Island eruption, titled Time of Darkness, was first published in 1982. Now at the age of 71 he continues to undertake research to find out more about the eruption, in particular a more accurate date for the actual eruption. This eruption is now regarded as one of the 10 largest eruptions anywhere in the world in the last six hundred years.

My interest in Long Island developed over 40 years as a Tourist Operator, operating small expeditionary vessels to most of the maritime islands in PNG including the Sepik River. This interest was further enhanced during my term as former Regional Member, Governor of Madang and as a National Minister during which time I personally experienced a number of eruptions at Manam Island, Rabaul and West New Britain. This interest prompted me to make contact with the various academics and scientists. It did not take long before I was communicating with Professor Russell Blong, Dr Stewart Fallon, Chris McKee, Mary Mennis (a well-known author on Madang culture), Professor Glenn Summerhayes, Louise Mourata, and Jared Diamond. We were then able to set a date for a special visit to Long Island on 13-16 June 2014 aboard my vessel, the Kalibobo Spirit.

The day before departure the group was joined by an old friend of mine living at Sugalau, Dadok Tamsen who was born on Bagabag Island, lived most part of his life on Graged Island (Mittibog Is) opposite the Madang Resort and a very respected and agile person with a sharp mind of early colonial life in Madang.

Our small group of scientists boarded the Kalibobo Spirit and sailed the 70 nautical miles across the Bismarck Sea to Matafun on Long Island in strong SE Winds with moderate seas, arriving at first light. Professor Blong reminded me of his first visit (with Chris McKee) in 1976 which had taken him 14 hours in rough weather. They went ashore, met some of the many people I know on Long Island, met an SIL Family who had just completed the translation of the New Testament after 28 years living amongst the people. Prof. Blong, Dr Fallon, Chris McKee and Dadok set about walking up the dry creek bed in search of old charcoaled logs that had been buried and preserved by the eruption, and that could be used to more accurately determine the date of the massive Long Island eruption.

Mary set about scouring the shoreline for any remnants of pottery and visiting a small impromptu “sing sing” performed to celebrate a birthday and launch of the New Testament in their language.

The group returned to Matafun in the early afternoon, satisfied with having been able to extract material they felt could provide the information required. We departed Matafun and headed for Pt Kiau which is basically a lighthouse and small Aid Post on the North Western tip of Long Island under Mt Reaumur and to the north of the huge caldera measuring 13 km long by 8 km wide and occupied by Lake Wisdom which is more than 300 m deep.

This is possibly the largest fresh water lake in the Pacific and, being several hundred metres above sea level and maintaining constant level, it could ultimately serve to make Long Island one of the most productive agricultural islands in the region with an unlimited source of water and potential hydro power. Strong SE winds reaching 40 knots deterred us from proceeding to Malala and we anchored at Pt Kiau and spent some time talking to the people about our purpose for the visit. It was not long before they were describing a buried village ‘long way liklik’, or ‘close to liklik’: a very confusing method of depicting distance. The result was that the group never reached ‘Pompeii in the Pacific’ and the team returned to the ship to cool off with an ale and the air conditioning.

In previous years, the Melanesian Foundation had funded the Lutheran Health Services to build an aid post and house at Pt Kiau. The Nursing Officer, who was the only trained medical person on the Island, had no medicine and was caring for a patient under a shelter made on the beach who was on the drip.

The Matafun Health Centre was closed and I never did determine if Bok Aid Post was operational, but I was assured there was no medicine, which resulted in us having to leave medicine ourselves on the island. The reason given for the closure of health services was no water, no radio, no medicine, no boat, bad weather (dry and SE winds) and all the medical staff had ‘run away’.

Interestingly enough, prior to departure, I contacted the Provincial Health Office and advised them we would be visiting Long Island and would be happy to take whatever medicine is available, but had no response!

The next day we visited Surao/Sakao River on the northwesternside of Mt Reaumur where the scientific group walked along the dry creek bed and located good carbonised trees. Charcoal was extracted and carried back to the Kalibobo Spirit.

The brief visit to Long Island was very successful. Dr Fallon will process the samples bought back to the radiocarbon dating laboratory at the Australian National University in Canberra. It is expected that some results will emerge in the next few months providing an estimate of the date of the eruption to within 10-15 years and possibly more accurately: quite amazing.

Krakatoa and other volcanoes have been well researched and documented. Long Island is in ‘the ring of fire’ which in PNG includes Manam, KarKar, Bagabag, Long Island, Tolikiwa, Rabaul,  Ritter, Umboi, Talasea, Cape Gloucester, Ritter and volcanoes on  Bougainville.

An improved estimate of the time of the last major eruption on Long Island will give us a clearer idea of just how long the ‘taim tudak’ stories have been passed down from generation to generation and a better idea of the actual size of the eruption. The improved age estimate will also help us date changes in prehistoric agricultural activity at the Kuk World Heritage site near Mt Hagen.

So many times research is carried out and so little of this information is provided to the public yet the information provided by research can not only affect the future but also enhance our understanding of the past. 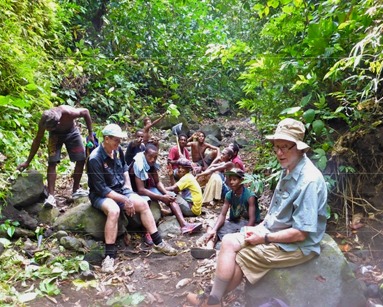 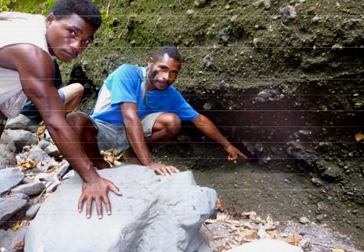 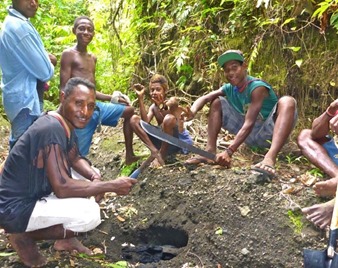 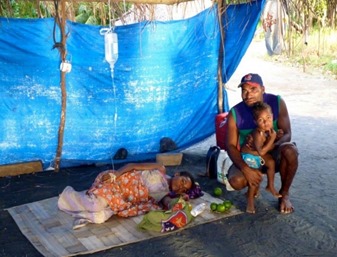 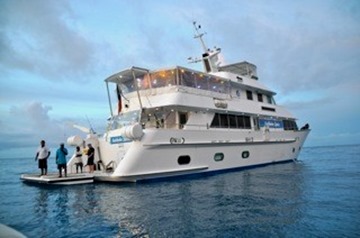