The NSW Department of Education has paid tribute to a unique group of former teachers who served our country during the Vietnam War period. 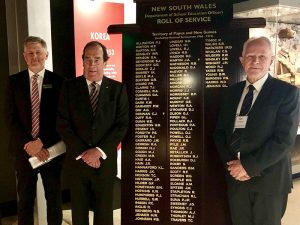 (L-R) Christopher Charles, Director, School Operations and Performance, Ken Boston, a former Education director-general and Ken Stevenson, representative of the Teachers’ sub-branch of the NSW RSL, with the honour roll for staff who served in Papua New Guinea.

Between 1966 and 1973, 300 young Australian teachers were conscripted to the Royal Australian Army Educational Corps to teach soldiers in the Papua New Guinean army.

Half a century later, more than 40 of the teachers reunited for a ceremony to see the unveiling of a Roll of Service honour board at the Infantry Museum in Singleton last week and to view an exhibition highlighting their work teaching Papua New Guinean soldiers.

The teachers, colloquially known as ‘Chalkies’, taught the soldiers a range of subjects including English, maths, science, sport, social studies and civics in preparation for the eventual independence of the country.

“It was an honour to represent the department and recognise our teachers for their service in the Royal Australian Army Educational Corps and thank them for their work serving our students upon their return to Australia,” the department’s Director, School Operations and Performance Christopher Charles said.

“I look forward to seeing the Roll of Service honour board displayed in our Parramatta office.”

Paul Mitrovich from the Australian Army History Unit told The Singleton Argus it was an honour and privilege to gather with the Chalkies and hear their story.

“These educators really have this great story to tell which everyone seems to have forgotten about because it’s overshadowed by Vietnam,” he said.

“Usually when you think of someone in uniform it is in a war and almost violent like outcome.

“Here we have a bunch of young men who are fit and smart and well educated and they go in and transform a country through education teaching.”

Major General Brian ‘Hori’ Howard added: “The influence of these young men, who did much more than teach school, is not well known.

“They quickly improved the standard of general education throughout the Defence Force and the country in general as ex-soldiers who had undertaken their programs returned home and were able to use their skills to help their people,” he told the Singleton Argus.

There is also the Book of Remembrance, which records the names of those soldier-teachers who served in World War I and II.