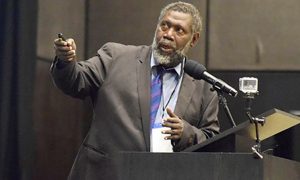 The autonomous region of Bougainville has lost a champion of independence and the father of the 2018 independence referendum.
Joseph Watawi, 61, who died in November, was born in January 1960 in Gohi village in the Selau language group in north Bougainville.
His mother, Anna Tsehu, was a chief and landowner in the matrilineal culture of Selau, and his father, Paul Mini, was a clan chief.
With a fierce intelligence that lasted until his death, Watawi finished high school at Hutjena before completing his engineering qualification at Malaguna Technical College in Rabaul and later Lae Technical College.
In 1979, he began working as a fitter-machinist at the Rio Tinto’s Panguna mine in central Bougainville. He became the union shop steward and found himself advocating for the rights of workers and landowners. At the time, despite Panguna being the most profitable mine on the planet, the women landowners were not being paid enough in royalties to buy food for their families from the mine store.
Watawi was instrumental in closing mine operations during the breakdown in negotiations that eventually led to the 10-year Bougainville civil war from 1988.
The Bougainville Revolutionary Army forced the Australian backed Papua New Guinea Defence Force off Bougainville until New Zealand brokered a peace agreement in 2000.
As paramount chief of Selau during the civil war, Watawi found himself in the dangerous position of having to lead negotiations with the PNGDF. This was a time when the PNGDF was carrying out arbitrary executions.

A tall, commanding figure, a great intellect and great orator, he was able to survive this period while protecting the civilian population of Selau.
The Bougainville war was effectively won in 1994 at the Kangu beach massacre where the Bougainville Revolutionary Army joined forces with the Bougainville resistance, which was supposed to be fighting on behalf of the PNGDF. In an action that is now called ‘green on green’, Bougainvillean fighters defeated the PNGDF Charlie Company at a sports day. This single ambush killed 25 per cent of Papua New Guinea’s standing infantry, but with Australian helicopter support this universally unpopular war was allowed to drag on for another five years.
After signing the peace agreement, Watawi became chairman of the Bougainville Interim Authority and later vice-president of the first Autonomous Bougainville Government in 2005.
Relentlessly dedicated to achieving Bougainville independence he was re-elected member for Selau in 2015 and took up the position of chairman of the parliamentary committee for the UN-backed independence referendum of 2019.
During this period, he was a key figure in running a traditional, truth and reconciliation process to heal the wounds and internal divisions left by the war. He travelled the length and breadth of Bougainville from remote mountain villages to making a long voyage to the remote Bougainville atolls advocating for a peaceful referendum and ‘yes’ to the independence vote.
With support from the ex-combatants, he was also a key player in the disarmament process during this time.
He coined the referendum slogan ‘Bruk lus, bruk gut, bruk steret na bruk olgeta’ (Break loose, break clean, break now and break up altogether).
While instrumental in disarmament, peace and reconciliation in Bougainville he never forgave Australia for its role in supplying helicopters and pilots to strafe and burn Bougainville villages and strafe boat loads of school children. He remained a staunch critic of Australian political interference in Bougainville affairs and the Bougainville referendum, campaigning against the Australian practice of setting up ‘advisers’ as the heads of Bougainville government departments.
In a 2017 press release he famously told Australia: “Australian aid is not about helping Bougainville but about gaining power and influence. As it stands now Australia would have more power and influence here if they replaced their foreign and aid corps with a drunk rugby team.”
Watawi hit his stride and again ruffled feathers before the 2018 independence referendum by running a practice referendum in his Selau electorate demonstrating that Bougainville was going to vote almost 100% for independence.
Never one to suffer fools, during the referendum Watawi was engaged in a heated argument with a UN worker who was telling him votes that arrived late would not be counted.
Watawi insisted the vote of every man and woman in Bougainville be counted. Tired of the argument, Watawi threw a copy of the Bougainville Constitution at the worker, hitting him on the head.
Needless to say, Watawi got his way.
As the referendum numbers came in, he kept track in a tally room he set up in his house at Kokopau [Bougainville Is] calling the 97.45% vote for independence before the Bougainville Electoral Commission.
In his advocacy for Bougainvillean rights and Bougainville independence, Watawi travelled to Australia, England, Ireland, India, Singapore, China, the US, Dubai and neighbouring Pacific Island nations.
He is survived by his loving wife Belinda Watawi, six children and seven grandchildren. He is loved and missed by thousands of extended family, clan and language group members in Selau as well as people throughout the 20-plus language groups of Bougainville.
With thanks to the Sydney Morning Herald, 15 December 2021 – HERE