Tribal fights in Hela are a common thing. The recent fights have been different though, as traditional rules of fighting and engagement are not observed. In the past, rival enemies were not allowed to burn houses when their enemies were inside. It was also a taboo to kill women and children or to hunt and kill an enemy in other people’s territory. Only people who are directly related to the fight were considered enemies. But these rules of engagement have been broken and women and children have been killed in these fights. Ten years ago I didn’t see any factory-made guns used in tribal fights. Now the M16 is a common weapon.

I don’t believe that the declaration of fighting zones will solve the problem because fights are mostly happening in the bush. Enemies are hunting each other and mobile phones make it easier to identify enemy targets. The culprits, or ‘owners of fights’ as they say here, can easily hide. The fights have started over different things. People may fight over something like a pig, but then it easily connects with previous tribal rivalries or political differences. I can’t say what these fights are really about. These people have fought over different things so frequently that it becomes complex to trace the cause.

Government services in towns and in no-fighting areas are still operating. People not related to the fight are free to go into towns and move around.

Some have taken refuge in other areas and can’t gather for Church meetings and activities. Declaring a state of emergency and pouring in more police and army or money is a short term solution.

Long term measures must to be taken if Hela is to stop these fights and move ahead with development. The leaders, starting with the elected politicians, must cooperate, work together and pour in resources to address these issues. They must spend more time in their Hela electorates and be in regular contact with their people. Their people must see them as being on the ground with them to address the issues head-on instead of living in Port Moresby and coming into Tari only to distribute money or for important occasions.

Money allocated for development by the government must be used for the intended purposes, so people can see real change happening and be happy. When you have so many unhappy and frustrated people, it leads to tribal fights. Leaders must come down to the level of the people and empower them for their own development instead of making them wait around for cash-handouts. Hela leaders must work in partnership with church groups like the Hela Council of Churches to address some of these issues. Unless there is a real political will and a heart for the people, very little is going to be achieved. 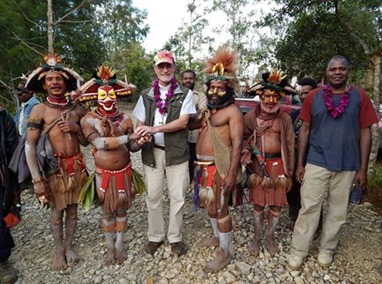