Compiled and edited by Nancy Johnston

Dedicated to the memory of William James (Bill) Johnston 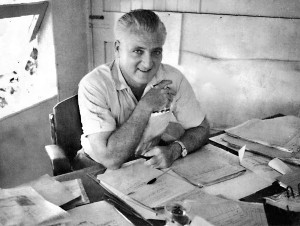 A Kiap of the Territory of Papua & New Guinea

“Our Father was a strong man with a pure heart. He had no religion but he followed God’s rules. He did not tolerate cruelty, injustice or fools and he had a great love of adventure and natural beauty and he made our lives exciting. He used to say life was about experiences and we had plenty. He loved us, not with words but by commitment of time, patience and devotion. He was the first to pick us up when we were down and always there when we needed him. We were safe in his shadow. I would like to thank him for my fifty years of fantastic memories and I thank God he was our Father.”
– Alan Johnston

The Papua New Guinea Association of Australia (PNGAA) is now entering a new and progressive era. On 5 May 2008 the newly elected President, Keith Jackson, wrote: “The PNGAA recognised it was time to pass on the baton to the next generation… Change, however, does not mean disregarding or disrespecting the inheritance of the Association. On the contrary, the Committee will be seeking new ways to honour the past and the senior members of the PNGAA, who care for the organisation so passionately.”

Before World War II, the ‘outside men’ carried out successful explorations in Papua and New Guinea but when war came to the two territories, patrolling came temporarily to a halt. The Australian Army called for young men to become Patrol Officers in the Australian New Guinea Administrative Unit (ANGAU). This unit was formed to carry out the function of the two former civil administrations of the Territory of Papua and the Mandated Territory of New Guinea.

On 30 October 1945, ANGAU was abolished and many of its officers transferred to serve as civilian career officers with the new Provisional Administration in the Department of District Services and Native Affairs (DDS&NA). The men from ANGAU, and others recruited from the Armed Forces, were appointed permanent officers. Their value had been tested and the high standards set carried over to their civil service that prevailed up to the nineteen sixties and seventies. Many of these men became the backbone of the post war, newly formed Department of District Services and Native Affairs.

The servicemen from the armed forces were the forerunners of the post-war ‘outside men’, the Kiaps, and they brought with them a wide knowledge of the two territories. The exploration patrols, by these men, were carried on well into the sixties, bringing areas under control to the stage of government influence which then cleared the way for the officers from other departments and the European police to move in and carry on with their work of health, agriculture, education and policing in the towns.

These Kiaps knew that one day they would work themselves out of a job. They knew change would come in the future as their ultimate aim was to build an orderly, prosperous and unified nation so the inhabitants could eventually live in peace and harmony in a self governing and independent country.

Many of them were the backbone of the Retired Officers’ Association of Papua New Guinea Inc. On 16 December, 2002, the Director-General of the New South Wales Department of Fair Trading formally approved our change of name to the Papua New Guinea Association of Australia (PNGAA). This together with our revised Constitution marks a significant step in the continuing life of our Association.

This Compendium shows in a small way the reason why the senior members care so passionately for their Association and why they are proud to have participated in the history-making period of Papua New Guinea that is now often forgotten.