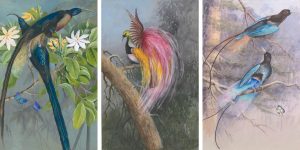 This exhibition is on at the National Library of Australia in Canberra until 8 March 2021.
Ellis Rowan (1848–1922) is one of Australia’s most celebrated artists, best known for her striking wildflower paintings but also for her interest in birds.
During WWI, when she was almost 70 years old, she had the opportunity to spend time painting professionally in New Guinea. Ellis created numerous pictures of the region’s Birds of Paradise and wildflowers. She was able to paint most of the 42 species of Birds of Paradise.
Her visits to New Guinea in 1916 and 1917 were at a time when it was uncommon for women of European descent to travel to the region independently. She befriended Irish born writer and traveller, Beatrice Grimshaw, who hosted Ellis on her visit to the island of Sariba, near Samarai in the Milne Bay Province, and provided Ellis with advice about New Guinea.
Beatrice had sailed to Papua in 1907 for a short visit but stayed close to thirty years managing a plantation, accompanying exploring parties up the Sepik and Fly rivers and growing tobacco near Port Moresby with her brother. She also wrote many of her forty-two books which included a part-autobiography, Isles of Adventure. Beatrice was a close friend of the acting administrator, Sir Hubert Murray, and became his unofficial publicist. In 1908 Beatrice urged Australian Prime Minister Alfred Deakin to make Murray’s position permanent. Deakin commissioned Beatrice to advertise Papua’s need for white settlers and capital and, following pamphlets, a book was published in 1910 ‘The new New Guinea’.
Ellis preferred to work en plein air, which involved hiking to remote areas with the support of the local people. Her passion for flowers and insects is also reflected in her watercolour compositions. She captured the elaborate plumage and complex mating rituals of the male Birds of Paradise, their long tail feathers, curled wires and some with iridescent head feathers.
A significant portion of the material on display in the exhibition is available to view online.
See more at: HERE