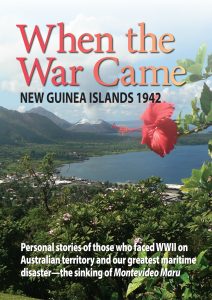 This book is a collection of personal stories, memories and reflections that enhance the history of civilians and soldiers living in Rabaul, Kavieng and the New Guinea islands at the outbreak of World War II, who suffered a fate that is seldom acknowledged— when the Japanese bombed, and subsequently invaded Rabaul, the capital of New Guinea, in January 1942. The stories also cover the largest maritime disaster in Australia’s history, where 1,053 prisoners of war and residents were loaded onto a Japanese merchant vessel, Montevideo Maru. All perished at sea when the unmarked boat was sunk by a US submarine on 1 July 1942 off the coast of the Philippines. When the War Came, published to commemorate the 75th anniversary of this period in the New Guinea Islands, validates and brings into focus the actions and characters of young men, who left home to willingly serve their country, and then literally vanished off the face of the earth; of nurses and missionaries who volunteered to stay to help both the war effort and the local people; and of civilians— both men and women—caught at home on WWII’s Pacific front line. Alongside are incredulous stories of escape and survival in an environment that threw every obstacle in their path. Their journeys deserve to be heard, too.

‘As I gathered more material, anger bubbled just below the surface, not just because of official silences and bungling or the terrible waste of life, but because so few knew about the tragedy of Montevideo Maru, even today. How, when more Australian men died on Montevideo Maru than Australia lost during the Vietnam War, was it not a discussed part of our history?’

If you would like to purchase this book, order below: