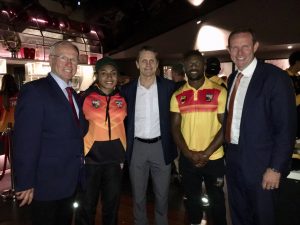 Also attending were Peter Beattie, Chairman of the Australian Rugby League Commission, Wayne Pearce, Amelia Kuk (Captain of the Orchids), James Segeyaro (Captain of the Kumuls), and documentary producer, Joanna Lester.
Held at the Palace Cinema Leichhardt, it was followed by a screening of the documentary Power Meri, a moving documentary that followed Papua New Guinea’s first national women’s rugby league team, the PNG Orchids, on their journey to the 2017 World Cup in Australia.
Power Meri draws on a variety of subjects.
‘High on that agenda was the prejudice women face in a country which has unfortunately high rates of domestic violence. But it also showed a nation of such diversity could unite and come together as one team.’ (https://www.foxsports.com.au/nrl/how-league-is-empowering-pngs-women-to-overcome-prejudice/news-story/36630ad62465fe9beeb9703f7a3b6bce)
Wearing t-shirts with ‘Respektim Meri’, it is clear that rugby league is becoming a vehicle to change perspectives and mindsets – the girls have a voice to stand up in public and stand up for what they feel.
The women’s match, with the Orchids, will be broadcast live across NRL digital platforms plus Kayo sports and the men’s match will be broadcast nationally across the Nine Network, Fox sports and NRL Live Pass.