Mangroves, Coconuts and Frangipani: The Story of Rabaul – by Neville Threlfall 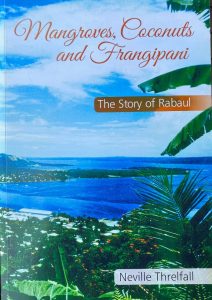 Established as a town just over a hundred years ago, Rabaul has a beautiful setting on a superb landlocked harbour.  Yet it has had a more troubled history than many older and larger towns.

Established without official sanction, it has been twice subjected to invasion and military occupation, and was totally destroyed in World War 2.  Violent earthquakes have shaken it and volcanic eruptions have devastated it, causing Governments to order several times that the site be abandoned: yet Rabaul’s people have clung to the site, rebuilding and restoring after every disaster.

This book tells of the geological reasons for the site’s instability; of the first human settlers; of European navigators, whalers, missionaries and traders; colonization by Germany and development of a port and town with a cosmopolitan community, which came under Australian rule as a Mandated Territory after World War 1.  There follows an often-stormy history up to and after PNG’s Independence, including three volcanic eruptions, but with the town still surviving, with its emblem the frangipani blossom still blooming.

Cost: $60 plus p&p ($20 in Australia).  Contact coordinator@pngaa.net for other overseas postage.

Limited copies available and the book is unlikely to be re-printed.

Note for members of the Rabaul and Montevideo Maru group: This book includes the story of the Australian soldiers and civilians who were taken prisoner when the Japanese captured Rabaul in 1942, up to the time when they were sent away on the Montevideo Maru, and of the torpedoing of the ship by the submarine USS Sturgeon. It also explains why the civilians were being sent to Hainan Island, in preparation for an exchange of civilian internees between Australia and Japan.

Purchase "Mangroves, Coconuts and Frangipani: The Story of Rabaul by Neville Threlfall"

Purchase "Mangroves, Coconuts and Frangipani: The Story of Rabaul by Neville Threlfall"