Historical monuments in the Gazelle District

At a time of considerable debate around the world about the role of historical monuments, the Gazelle District Development Authority Board has made a policy decision basing its strategy on the potential tourism sites. 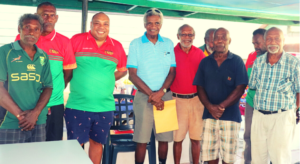 Minister Wong and the working committee during the cheque presentation last week. Sourced from: Loop PNG

Through a Community Driven Initiative, the people of Navunaram and surrounding wards in Central Gazelle LLG have set up a working committee for a proposal to erect of a two-metre monument. Additionally, improvement is planned to the pedestrian access at the historical assassination site where Peter ToRot, a Catechist and martyr, was killed by Japanese forces in 1945.

Also, a memorial cenotaph will be erected in the exact spot where two locals, ToVatuna and ToVurete, were fatally shot by police on the 4th of August,1958. The two were part of a protest at the Navunaram personal tax collection booth. They were expressing opposition to the payment of head tax to the newly established Multi-Racial Council. The proceeds of their tax were intended to be used for basic services like roads, aid posts and schools affecting them in their own communities.

The population of Navunaram is part of the Tolai ethnic group and therefore, the community functions under the traditions of the Tolai. They are reported as having strong community values and practices.

Community meetings are held for many reasons, one of which is addressing the welfare and maintenance of their homes. Most families in Navunaram build their homes close to the rest of their relatives. A family’s home typically consists of multiple buildings, most commonly one for living, one for cooking, and an outhouse. Since multiple generations live together, there is a strong sense of connection between all members whether they are parents, children, aunts, uncles, cousins, or grandparents. Each group of nuclear families functions as a unit in parenting, cooking, cleaning, farming, hunting, and all other household responsibilities.

Each day in Navunaram follows the same basic schedule revolving around farming and agriculture. Each day is filled with planting, maintaining, or harvesting each family’s blocks and selling crops. Every member of the family assists in each task. Around 9 o’clock each morning, someone leaves to take the crops into town to be sold at a local market or to an exporter, while the others take care of the house and the garden. By mid-afternoon everyone is out working until dinner time. Such is the case with the majority of Navunaram families during weekdays, which makes weekends a time when all other responsibilities are taken care of.

On July 10, Gazelle DDA board chairman and Gazelle MP, Jelta Wong, presented a K300,000 cheque to the chairman of the Project Working Committee, Don Manoa, at Navunaram. It was witnessed by LLG presidents for Central Gazelle and Reimber-Livuan, other working committee members and Ward Members.

Minister Wong said the GDDA Board made the decision to support this project because it was based on a Community Driven Initiative. On completion, it would add value as new tourism sites in East New Britain and both sites have historical significance for the community, province and country.

It was a way of giving something back to Navunaram ward that has a history of past leaders standing up for what they believed was right on their principle of self-determination for self-rule and eventually independence; but some paid the ultimate price.

“It is a very good initiative and will put Navunaram back on the map of ENB as one of the prestigious wards in Central Gazelle,” he said.

Minister Wong said pilgrims from all over PNG, and indeed the world, will be travelling to these memorial sites to honour these men.

He said it is only proper for those in authority to consider the importance and significance of such sites and manage them for the benefit of Gazelle District.

Manoa thanked the Gazelle DDA for its assistance and gave assurance that every toea will be fully accounted for and acquitted.

Preparations are in progress for a combined Church service on August 7, 2020, to commemorate 61 years since the men were killed and humiliated by the heavy-handed tactics sanctioned by the Commissioner at that time. It will also trigger the work on both sites.