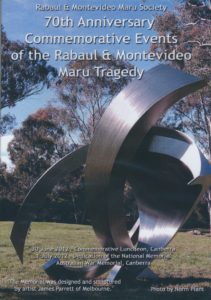 This DVD covers the 70th Anniversary dedication of the Rabaul and Montevideo Maru Memorial on the 1st of July 2012 at the Australian War Memorial, Canberra, and the accompanying luncheon on 30 June 2012.

Rabaul, the capital of the Australian Mandated Territory of New Guinea, with its magnificent harbour, was one of the first and prized objectives of the Japanese invasion fleet in their southern push.

The DVD commemorates the events which occurred due to the fall of the Australian administered New Guinea islands in January 1942, including the disastrous sinking of the POW ‘hell ship’ Montevideo Maru, torpedoed off the coast of the Philippines by an American submarine, the USS Sturgeon, in the early hours of 1 July 1942.  What the Americans did not realise at the time was that the boat was in fact a floating prison, holding 1053 Australian POW’s and civilians.

It remains the worst maritime disaster the Australian nation has known, the only “hellship” with no allied survivors; a disaster borne in war and one which was unknown for three and half years.

Tragically, 1,053 Australians perished on that fateful day, with another 160 men murdered in the Tol Massacre of February 1942 and countless others who died of illness and starvation whilst trying to escape through hundreds of kilometres of jungle, rivers and seas.

70 years on, following major fundraising by the Rabaul and Montevideo Maru Society, this national memorial, with its emotional resonance and historical significance and created by James Parrett, cherishes the memories of all those lost.

The DVD is in two parts:

The commemoration address was given by Governor General Ms Quentin Bryce. Other speeches by Rear Admiral Ken Doolan, Chair of Council of the Australian War Memorial, Canberra ACT and National President of the RSL; Phil Ainsworth – President of the Rabaul and Montevideo Maru Society; Margaret Henderson on behalf of the civilians; Norm Furness – President of the 2/22nd Battalion and Lark Force Association; the Hon Peter Garrett AM MP representing the Prime Minister of Australia; Senior Chaplain Katie Inches-Ogden and Principal Chaplain to the Army Geoff Webb.

The Salvation Army’s world famous Melbourne Staff Band plays magnificent renditions of Arthur Gullidge’s music. Also featured is the inaugural performance of ‘Sons of Australia’, the Ramale Anthem, accompanied by Rebecca Raymond’s beautiful voice.  Initially written and composed by Prisoners of War interned in the Ramale Prisoner of War Camp, New Britain, in preparation for their liberation, the handwritten score was handed to Major Charles Bates in September 1945 and is now held by his daughter, Pat Johnson. Bandmaster Ken Waterworth arranged the music especially for the band to play at this special dedication.

Producer John Schindler said he was drawn to the Montevideo Maru story because his own mother lost four loved ones in the tragedy:

‘It is one of Australia’s greatest maritime tragedies with the loss of 1,053 lives and yet remarkably, most Australians have never heard of it. This documentary will once and for all put faces to numbers.’

The DVD is professionally filmed in high definition colour format and is 2.5 hours total length.

The Rabaul and Montevideo Maru Society was later integrated into the Papua New Guinea Association of Australia Inc,

Cost: $20 which includes postage within Australia