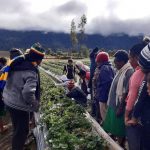 A new farm work visa will be offered to residents from 10 South-East Asian countries to help Australian farmers harvest their crops. These include Indonesia, Myanmar, Vietnam, Singapore, the Philippines, Malaysia, Thailand, Laos, Brunei and Cambodia.
Jonathan Pryke, Director of the Pacific Islands Program at the Lowy Institute, says:
‘…the government is right to leave no stone unturned. But if this ASEAN visa were to be implemented as planned, it would… undermine the existing solution to labour supply shortages – the Pacific Seasonal Workers Program.’
Australian Nationals deputy leader and Agriculture Minister David Littleproud, announced in June 2021 that the party had secured a ‘seasonal agricultural workforce visa’ for citizens of Southeast Asian (ASEAN) countries to come to Australia.
Mr Littleproud said the new visa must recruit more than 10,000 workers a year.
“It will be for three years, and they will have six to nine months’ worth of work,” he said.
Mr Littleproud said the visa, still to be finalised in Cabinet and by the expenditure review committee, would have different conditions to the Pacific labour and seasonal worker schemes.
He stated: “Pacific worker programs have and will continue to play a critical role in our agriculture sector and the new visa arrangement will build on the success of these arrangements.
Jonathan Pryke continues:
‘This [visa] follows years of lobbying by the Nationals in response to demands from farmers to solve a labour crisis where, thanks to closed borders, they face shortages of 26,000 workers.
‘A worker from the Solomon Islands can earn in a week on a Victorian fruit farm what it would take a month to earn at home.
‘Since 2012 the Seasonal Workers Program has provided more than 40,000 jobs to workers from the Pacific and Timor-Leste. Workers on the scheme on average earn four times more than they would back home and there have been close to $200 million in net income gains to the region, directly into the pockets of people in the Pacific.
‘Farmers have also benefited from the scheme. Pacific islanders typically stay six times longer at a farm than backpackers and are, on average, 20 per cent more productive. The scheme is clearly catching on, experiencing 50 per cent growth in almost every year leading into the COVID-19 crisis. The well-regulated scheme also offers a solution to significant exploitation in the horticulture sector – exploitation that a 2016 Senate committee labelled ‘a national disgrace’.
‘If the program is so effective, why are farmers and the Nationals still looking for alternatives?
‘Farmers have legitimate reasons to be frustrated with the Seasonal Workers Program.
‘The simple answer is cost. The program is heavily regulated. Farmers – or more commonly, labour hire companies – must sponsor workers and organise flights, accommodation, pastoral care and meet other basic needs of the workers as well as guaranteeing at least 30 hours of work a week over enough weeks to demonstrate the worker has benefited financially from their labour.
‘It would be much easier for farmers to have an eager labour force with the same loose restrictions that the backpacker scheme enjoys. Workers show up, they work, they leave. Beyond paying them, you need not worry about much else. Farmers have already been getting a taste of this new ‘ASEAN’ workforce through the expansion of the backpacker scheme to include select South-east Asian nations, as well as other sources such as people in community detention waiting for their asylum claims to be processed.
‘Littleproud essentially admitted that lower regulation was the driver when he announced the scheme. In a Radio National interview, he argued the Seasonal Workers Program needed its “extra conditions and protections” because it employed Pacific workers. It is hard to say who this is more demeaning of – the ASEAN workers for whom exploitation is apparently fair game, or the Pacific workers who would be helpless victims of exploitation without the regulation.
‘Farmers have legitimate reasons to be frustrated with the program. It is over-regulated and hard to sign up to. It should be reformed to ensure farmers feel a sense of co-ownership in the scheme, not that it is something forced upon them by the government.
‘The government could start by having the scheme managed by the Department of Agriculture – a Nationals-run department. A reference group of employers and key industry associations should be appointed to have a central role in shaping the program going forward. It should be easier for farmers to sign up to and recruit directly from the program, rather than through labour hire companies.
‘Beyond finding able workers, there are broader concerns for Australia to consider. The scheme fits squarely at the core of Australia’s strategic interests in the Pacific. It is no secret we are in a fierce competition for influence in the region with China.
‘Considering that we spend nearly $2 billion a year in the Pacific across aid, defence, policing and diplomacy, seasonal labour represents the greatest bang for our buck in our strategic investment approach. It costs us hardly anything, builds goodwill and strengthens people-to-people ties. And – significantly – it is an area where China simply cannot compete.
‘This whole discussion also ignores the primary driver of the farm labour shortages: closed borders. It took the better part of a year for state and federal governments to even begin letting new Pacific workers into the country through pilots of pre-quarantine and isolating on farms. And these are workers coming from countries that are free of COVID-19.
‘Does the minister seriously think we’ll do it faster with ASEAN nations?
https://www.afr.com/policy/foreign-affairs/asean-worker-plan-undermines-our-pacific-island-job-diplomacy-20210622-p5839j