On the occasion of the 100th Anniversary of the ANMEF Capture of German New Guinea and the loss of HMAS AE1, the Anzac Centenary was commemorated in Rabaul with almost a week of events in early to mid-September 2014. 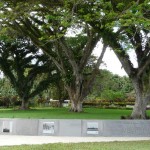 On Wednesday 10 September a dusk service was held for NGVR/Lark Force and Montevideo Maru on the Rabaul foreshore. Information about this is in Memorial News on page 43.

The Rabaul Historical Society then hosted a Welcome Party at the New Guinea Club in honour of the Royal Australian Navy. 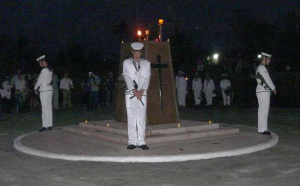 A Dawn Service was held at the Rabaul Cenotaph at 0510 hours on 11 September, followed by a Gunfire Breakfast at the Rabaul Yacht Club.

The Royal Australian Navy held a Commemoration Service in honour of the men of ANMEF and the first casualties of the Great War at the tranquil Bitapaka War Memorial at 10am on 11 September 2014. Televised live to Australia, ABC and Channel 7 provided a magnificent record of this special service. 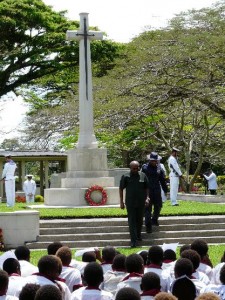 11 September 2014 Centenary Service at Bitapaka, Rabaul
Below: Jim Kemsley whose father was with the ANMEF

Minister for Veterans’ Affairs, Senator the Honourable Michael Ronaldson; Chief of Navy, Vice Admiral Tim Barrett; and Deputy Prime Minister of Papua New Guinea, The Honourable Leo Dion, were amongst the 1000 people who paid tribute to the six Australian servicemen who lost their lives in this battle. HMAS Yarra’s ship’s company provided the catafalque party for the service, mounted on the Cross of Remembrance.

Those attending were particularly touched when two sailors from HMAS Yarra assisted two Year 11 boys from Shore School in Sydney and two local school boys from Bitapaka with laying six crosses at the ANMEF memorial. These crosses were signed by school children from all across Australia as part of the Australian War Memorial Commemorative Crosses Program.

Relatives of men of the ANMEF attended.

A haus win had been built to provide shelter for the guests. A local Bitapaka school joined in the event. The service was followed by morning tea in the gardens outside the memorial. Tables and chairs were arranged and it was a delightful setting under the large rain trees. 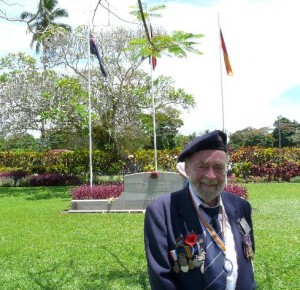 Royal Australian Navy Minehunter HMAS Yarra had conducted an underwater search off Rabaul for HMAS AE1, the Navy’s first submarine, in the week leading up to these events. It is understood that search equipment was limited to approximately 300 metres and was perhaps not deep enough.

Artist Margaret Hadfield created a painting in honour of the men lost on AE1. 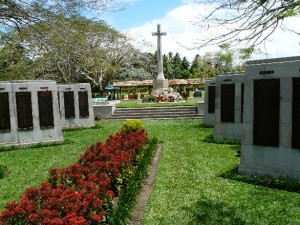 At 0500 on 13 September 2014 a Kinavai traditional Rabaul welcome was provided for the Royal Australian Navy. Duk duks with their massive, glossy leaves, arrived by canoe. With HMAS Yarra moored in the harbour Commodore Peter Scott and Petty Officer Oliver Kaese, dressed in traditional dress of laplap and with shell money attached to the belt, were inducted into the Tolai tribe by its elders. HMAS Yarra and the Sydney detachment of the Royal Australian Navy Band watched the three-hour ceremony.   Commodore Scott said the welcome was a tremendous privilege.

Sunday 14 September had the Royal Australian Navy Band, led by the RAN Band Quintet, march in their whites, from Malaguna Road to the harbour front, with thousands of local Papua New Guineans following. It was a magnificent occasion with beautifully dressed school children and choirs participating in the ceremony for HMAS AE1 overlooking Rabaul’s Simpson Harbour which followed. 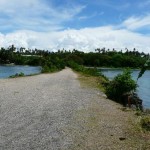 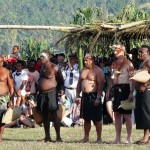 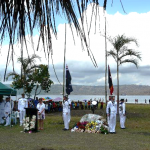 14 September 2014 Centenary Service for those lost on AE1 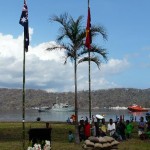