My late father, John Walker, a long-term member of PNGAA, had two spells in PNG with the Department of Civil Aviation (DCA). The first was in 1946 when he was appointed officer-in-charge of Jackson Airport, Port Moresby, taking over from the RAAF.

He arrived on 20 April 1946, just after a flood caused by twenty-five inches of rain that fell at Jackson, causing a portion of runway No. 3 to fall into the creek.

Flight Control Officer Charles Rowles was living in a shack at one end of the aerodrome, while his colleague Mr Bonney was living with RAAF aerodrome controllers.

They had no transport and were living on rice and tinned meat until the meat ran out. Mr Bonney and Mr Rowles had to wade through water up to five feet deep to get to the tower during the flood, where they found a single RAAF operator trying to keep himself and the instruments dry. 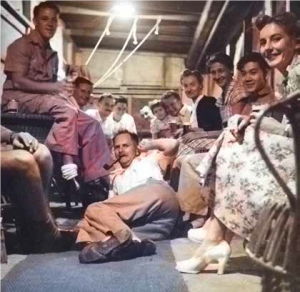 A party at our home, ‘Taldora’. My father is the man posing in the centre of the photograph.

All point-to-point receivers were under water but, fortunately, the aeradio was less affected. Rowles managed to get some Sisalkraft paper to give Mr Bonney and the instruments some protection, and aeradio functioned on and off until about noon. The main road to Moresby was under water and RAAF personnel were unable to get to the aerodrome from their quarters at Wards Strip.

A few days later my father arrived and was initially accommodated with Mr Rowles, sleeping on an army stretcher, which he said was more suitable for a corpse. With no transport, they continued dining over Easter on tinned meat and rice.

At the time, the Provisional Administration was in a somewhat confused state. Many assets that existed at the end of the war had been removed, damaged or fallen into disrepair.

Living costs had increased so that butter cost 2/9d, an average cut of meat was 2/9d per lb and a head of lettuce was 2/–. Fresh fruit and vegetables were hard to come by. My father’s salary at the time was about £500.

As well as these shortages, technical expertise was hard to come by. DCA was looking at employing carpenters from south to get housing moving for employees. My father had some difficulty employing a part-Chinese technician as Chinese were not allowed in Papua, but their need for him won the day.

Most of this information was contained in letters that my father retained. They contained some startlingly frank staff assessments, much more so than any you’d see these days.

I was born at the end of November 1945, so was about four months old when my father went to Moresby. We joined him when I was eighteen months old. He had accommodation in ‘Taldora’, a fairly primitive house (wooden shutters, unlined and pit toilet) out of town. By now my father had use of a jeep in reasonable running order.

There were not a lot of expatriate children and quite a few men missing their families. Our fridge was always filled with chocolate that people would give my mother for me. She was most particular about my diet and doled it out sparingly. Otherwise I ate tinned vegies and drank Malanda milk.

My mother loved New Guinea and very much enjoyed not having to cook or do housework, though looking after a toddler was trying. ‘Taldora’ had concrete verandas with potholes so I almost always had bruises from falling over and one time had to be rescued from a snake hanging from the rafters over my bath.

Life was fairly carefree, lots of young men and women somewhat euphoric postwar. My parents had some great parties. Beer was an item that called for celebration when supplies came in. Otherwise rum was the drink, particularly Rhum Negrita. My unmarried aunt was a very popular visitor.

Our second stint in PNG with DCA was in Lae. We lived in Coronation Street. We were in Lae for four years, from 1956 to 1960. My mother was delighted to be back in PNG. Some friends from Moresby were living in Lae, in particular Heather and Kel Kelly.

Heather was Heather Murray and had been living with her parents and brother Stewart in Moresby during our earlier stay in PNG. I have an idea her father was Colonel Murray. She worked for Laurie Crowley in Lae. We’d usually meet up at the Hotel Cecil on weekends for a swim or go to the Lae Club, where I would read if we hadn’t taken a friend for me. The Kellys always served spaghetti bolognese when I came home from boarding school in ’59 and ’60. 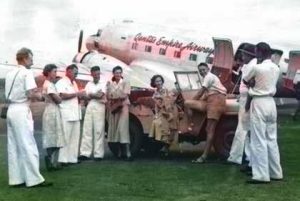 A Qantas plane at the Jackson aerodrome.

Social life was very active and fairly sophisticated. Australia was still in the ‘meat and three veg’ stage for our peers. We went out for dinner and ate Chinese. I remember progressive dinners that usually ended up at the Kellys as they had a piano. We had LPs of South Pacific and My Fair Lady, not available in Australia at the time, acquired from visitors to Hong Kong, which also got a work-out.

DCA was a big employer of expatriates. I remember going to school and being introduced by another DCA daughter (Rayleen Lonsdale): ‘She’s DCA and she’s DCA but she’s not.’ I enjoyed Lae Primary, coming from Adelaide where I was the fiftieth class member when I arrived.

We made a movie, as was our headmistress’s wont. I was an elderly lady pleading with Robin Hood to save my son from the wicked Sheriff of Nottingham. Just like Dallas years later, I think the various sequences were a dream. It started off with ‘Pedro the Fisherman’ and I think the littlies had some nursery rhymes to act out. I also remember playing Cluedo at lunch time.

One thing that impressed me was the fridge where we could put our lunches. Having grown up with un-refrigerated school milk, which turned me off milk for life, this was great.

While we were living in Lae, rubber thongs made their first appearance. In our school photo, I am the only one wearing shoes and socks. My mother had a thing about hookworm.

Transistor radios also made their appearance in Lae before reaching Australia. I had one and was able to listen to the Melbourne Cup in French class and pass the word around, to the amazement of the teacher, when we’d left Lae.

In ’59 and ’60 I had to go south for school. I passed the subsidy exam, coming sixth in English and sixty-fifth in arithmetic out of 132. We used to fly in a Super Constellation, which was very luxurious. We saved the menu all year to drool over when eating Repeater and Murder in the Mud at school.

From Lae we went to Coffs Harbour but the connection with Lae remained. Our neighbours from Coronation Street were employed in Coffs—Max Honan and his family. Max later went back to Lae and worked for Brian Bell. He could tune pianos as well as work as a communications officer. The Lonsdales were also in Coffs at one time.

We had very happy times in PNG. I could never hear ‘Island in the Sun’ without thinking of the country. I subsequently returned to PNG with husband and family, but that’s another story.