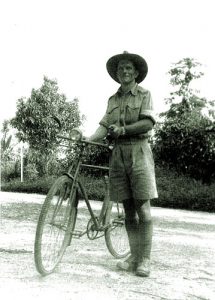 Willis grew up in Melbourne then worked on stations in Queensland and NSW during the Depression. He returned to Melbourne in 1940 to enlist in the Australian Imperial Force (AIF), and his service number was VX28596. Commencing duty at Balcombe on 1 August 1940, he was posted to 2/22 Battalion Lark Force. Training was at Puckapunyal and Bonegilla, where he was graded Intelligence Duties Group II.
He married Aileen Margaret Hamilton in Melbourne in January 1941. Lark Force was sent to Rabaul, New Britain, three months later in April. Oral history relates that he spent much of his time there on cypher duties. He was promoted to Lance Sergeant in July 1941.
The Japanese invaded Rabaul on 23 January 1942.
As orders were ‘every man for himself’, he and others walked across the Baining Mountains to the south coast of New Britain, then along the coast to Uvol Mission, narrowly missing the massacre of soldiers by the Japanese at Tol on the way. He and ten others left Uvol Mission on a pinnace, Maria, reaching the Trobriand Islands and, eventually, the island of Samarai. On Friday, 16 February 1942 at about 7.30 am a catalina, which was returning to Port Moresby after a bombing trip over Rabaul, landed at Samarai buoy and picked up twenty-one people, a mix of civilians and Australian Army men, one of them being Willis.
Some time after his return to Australia, Willis wrote an account, in the form of a diary, of his escape from New Britain after the invasion. The diary commenced on 23 January and ends on 27 February 1942. Again, oral history relates that the day before the Japanese invaded Rabaul, Willis and others were at Vunakanau airfield emptying drums of aviation fuel. So he was already out of Rabaul on Friday, 23 January 1942 when they heard that the Japanese had landed at Vulcan in the morning.
On reaching Port Moresby on 27 February, suffering from tropical ulcers and an injured knee, he was admitted to hospital. The injury to his left knee had happened on 12 February when climbing up the bank of a wide river, after which he had to walk on it locked. Later it was found to be an injured cartilage and bursitis. He was repatriated to Australia, embarking on the Malaita on 9 April 1942, disembarking in Cairns on 14 April. He travelled to Melbourne by train.
After the invasion of Rabaul the army sent Aileen a telegram stating that Willis was listed as ‘missing in action’. Her mother said to her that she was taking the news very calmly. Aileen’s reply was that she knew he was alive. His survival and escape were not known until she received a letter from him dated 27 February 1942, written from hospital in Port Moresby. There was no advice from the army that he was there. Again, the army did not advise Aileen that Willis was due in Melbourne by train—he managed to send her a telegram letting her know when he was due to arrive. The actual date of his arrival in Melbourne is not in his military records. Aileen and his mother, Maud, had to find him and help him along the platform of the railway station as he could barely walk. He was nursed back to health by Aileen and Maud.
Declared medically unfit for further active duty, in between spells in hospital with malaria, and having the left knee cartilage repaired, his duties were in signals and cypher sections. In October 1942 he was detached for Special Duty in the 1st Australian Cypher Section and sent to Canberra for six months. He travelled to Goulburn by rail and the only way to get to Canberra from there was to ride a bicycle.
At the end of 1943 he was discharged from the AIF to enable him to enlist in the RAAF in January 1944. His service number was 129846. He attended the Signals School and Cypher Officers Course at Point Cook, and was posted to various places with most of his time being spent in the Northern Territory, first at Gorrie, 54 Mile, Batchelor and then Darwin until the end of the war. On demobilisation his appointment with the RAAF was terminated on 19 December 1945.
As happened to so many returned men, Willis did not talk about his wartime experiences until late in his life, when in June 1992, he and others went on a trip to Rabaul. It included a visit to Tol. Having to use two walking sticks to move around it was not an easy trip for him, but he did need to go on it. It was a very emotional and meaningful occasion for him.

From an account of Willis’ life by Lynnette Aileen Bowman, née Crocker