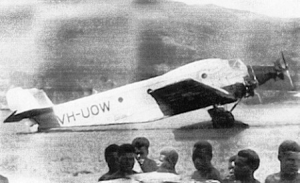 The discovery of gold in the Bulolo Valley of New Guinea saw a rush of aircraft and pilots to Lae to service the goldfields – equipment and supplies in, gold out and passengers both ways. Supplies, which had previously been carried in by carriers at prohibitive cost, were now transported by aircraft.
In the first 12 months of operations they carried 250,000kg of cargo and hundreds of passengers, but this paled into insignificance when German Junkers transports were purchased by mining companies to transport dredges.
As the Australian Postal History website says, the all-metal Junkers with their corrugated fuselages were unlike anything previously seen in Australia, but they were superb aircraft – tough and powerful with lower maintenance requirements. The Junkers pointed the way to the future in aircraft design, 60 flights a day landed at Wau airport, such were the number of airline companies and aircraft operating at this time; each Junkers made as many as five flights a day. In 1932, the Junkers transported a 1,100 tonne gold dredge to Bulolo, broken down into its component parts. By 1933, Guinea Airways had carried some 7,000 tonnes of cargo, including drilling machinery, hydroelectric plant and additional dredges.
This airline was carrying quantities of freight far in excess of anything that would be seen until the major airlifts of World War II.
In the 12 months from February 1931, Guinea Airways carried 3,947 tonnes of freight and 2,607 passengers. This is an astonishing figure when put in perspective of comparison that the combined airline services of the UK, France and the USA were recorded as only carrying 2,670 tons of freight in the same period. Seven more dredges were flown in up to 1939, all by air, bit by bit.
By 1942, when the Japanese invasion of New Guinea put an end to civil flying, Guinea Airways had carried some 73,480 tonnes of machinery, trucks and equipment.