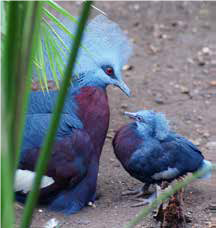 The majestic Victoria Crowned Pigeon was named in honour of Queen Victoria for its delicate blue crown and its regal poise. The bird’s feather crest, a beautiful display of dark blue lace with unique white tips, makes it easily recognisable. Stunningly beautiful and intelligent, they have powdery-blue feathers, red eyes, a dark mask and maroon breasts. A lighter shade of blue highlights their wings and tail feathers.

The birds originated in the tropical lowland forests of the north coast of Papua New Guinea, particularly Madang and  Astrolabe Bay, the Sepik Basin and Collingwood Bay—as well as surrounding islands—where they are usually found at or near sea level but may venture up hills to 600 metres. They are the largest living pigeon and the closest relative to   the extinct dodo bird, growing to 73–75 cm long and can weigh up to 3.5 kilograms.

The birds are docile by nature and easy to tame; able to live twenty-live years in captivity with good care. They are happiest in pairs, roaming freely together or in small parties, and they like plenty of space and foraging for food on the ground. Whilst able to fly short distances they will only fly when necessary, usually when startled, in danger, or in need of a high roost, usually 10–25 m above the ground, in the trees for the night. Their diet consists mainly of fallen fruits (including figs), seeds, grains and small invertebrates, including insects.

Victoria Crowned Pigeons are a monomorphic species, with males only slightly larger than females and both similar in appearance. When defending their territories, they make deep ‘whooping’ sounds, i.e. whup-up, whup-up, whup-up, which can be loud and surprising. 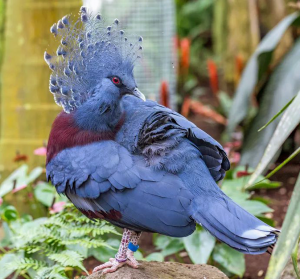 The male pigeons have an elaborate courtship dance, and their mating call consists of a deep hoota-hoota-hootahoota-hoota sound, similar to the other two species of crowned pigeons. Both the male and female incubate up to   three eggs each year, which take around a month to hatch, and then raise the young squabs.

Previously hunted for their meat and feathers, the species are now only common in remote areas. Due to hunting and habitat destruction, the wild population declined rapidly, endangering the species to near extinction. Deforestation of its natural environment still occurs, but Goura victoria remain protected under PNG Legislation, and has improved from being a ‘threatened’ species to ‘near threatened’.