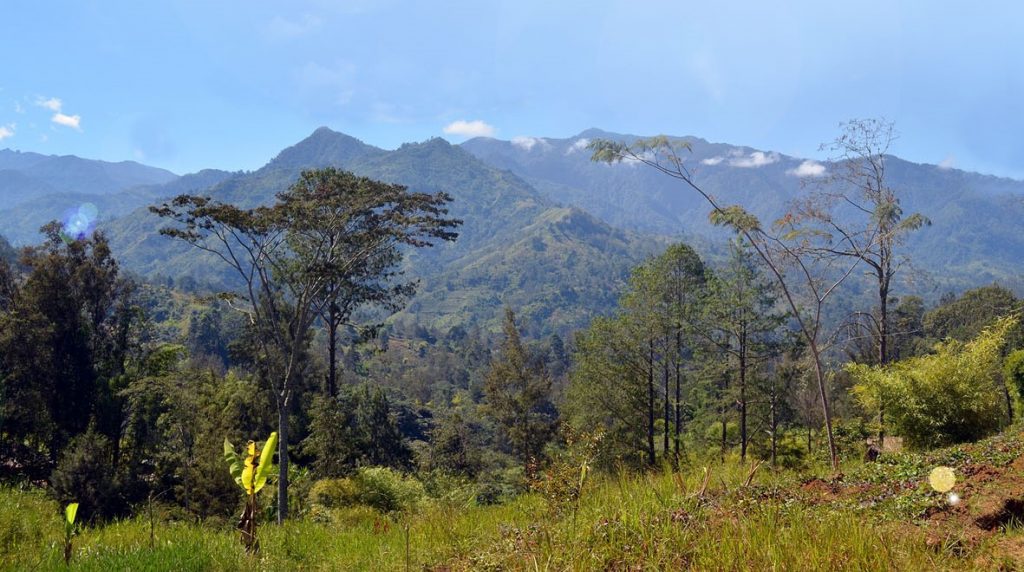 In 1957 I was flying from Sydney to the Solomon Islands to work as a nutritionist.

The plane stopped at Port Moresby. I arranged to meet the only other nutritionist working in the Pacific area at that time, Lucy Hamilton Reid. She was working in the Fore district in the Eastern Highlands with a group of scientists, mostly from the US. They were endeavouring to find the reason why so many women of the Fore group were dying young, leaving a surplus of men who could find no women for wives and, consequently, no chance of a life with a family. It was thought at that time that it might be something in the food of the women that was the cause of their early death. I would be meeting up with the group at the Fore’s Patrol Post at Okapa.

Episode 1: When I arrived they were still out on patrol, so I spent the night alone at the Patrol Officer’s house. Early next morning, when it was still cold in the mountain air, I met two men with one woman on the edge of the Patrol Post.

The two men were dressed in grass aprons and the woman in a grass skirt. I felt very overdressed. We all stopped in our tracks. I was staring at them in their scanty clothing on such a cold morning. As I became aware that they were staring at me I noticed that there was a very strange look in the eyes and faces of all three. After a few seconds the woman, who was in the middle between the two men, took a couple of steps towards me, and quietly asked me, in Pidgin, ‘Yu wanpela meri?’ I replied, after a slight pause, ‘Yes.’ It was obvious to me, but not to her, with my hair, my face, my clothing, so different to any white man’s.

The Fore woman took two more steps forward, put out her arm and traced first my breasts, looking closely, then her hands went down to my belly, while the eyes of the two men still had a puzzled look. I stood still, wondering what thoughts were going on in their heads.

Suddenly the woman said, strongly, defiantly, ‘Yu gat pikinini?’ I replied, equally defiantly, ‘Nogat man bilong mi.’ She stood quietly, looking at what she could see of the outline of my belly. Feeling it to double check. I continued in English, ‘But I can have a pikinini if I have a husband.’ But I was still not sure if she understood. ‘Mi wankain yupela- meri,’ she said, ‘bipo, mi tink waitman kam stret long God.’

Episode 2: I went back to the house to have breakfast. It was all laid out on the table by the Patrol Officer’s house servant. After I had finished the sun had come out and I decided to go for a short walk along the road down the hill. There was no sign of the researchers.

Near the bottom of the hill I saw a bench with three men sitting on it and as the road ended at the bench I took a seat there. I got talking to the men who soon started showing me the coins and trinkets they had in small boxes or tins. These three men were more sophisticated than the two men and a woman I had met at the Patrol Station earlier. They had a few real coins and their Pidgin was more fluent.

After a few minutes their interest in me diminished and they were talking excitedly among themselves in Pidgin.

I concentrated hard to hear what they were saying. It was about pigs; and numbers of pigs—bride price, MY bride price. I hurriedly stated, ‘One hundred pigs.’ A pause. Two seemed interested. I quickly looked up the hill to the Patrol Post. No sign of the researchers or the Patrol Officer, Jack Baker. So I responded, ‘One hundred pigs; in three days I go back to Moresby.’ The end of the world no doubt for these people.

Then came the disappointing, disappointed reply, ‘Sori misus, wan handet pik long tri de, planti tumas!’ I got up and walked slowly back to the Patrol Officer’s house.

To reflect—a lone white woman, here twenty-four hours and already proposals of marriage! This was the place where I wanted to work. And I did. In 1961 I arrived in Gumine, west of Goroka in the highlands of Papua New Guinea, where I had a different kind of welcome from the local people. A more sophisticated one, but also most rewarding.

Editor’s Note: We are indebted to Mary Young for the following information about the author: Josephine Whiteman is a nutritionist who came to PNG in 1961 after working in several areas of the Pacific, including the Solomon Islands. She researched and taught in social anthropology and became a member of a clan in Gumine in Simbu Province. She also lectured at the Papuan Medical College, a forerunner of the Faculty of Medicine at the University of Papua New Guinea.