The Battle for Milne Bay—Japan’s first defeat on land in the Second World War—was a defining moment in the evolution of the indomitable Australian fighting spirit. For the men of the AIF, the militia and the RAAF, it was the turning point in the Pacific, and their finest—though now largely forgotten—hour. Forgotten, until now. 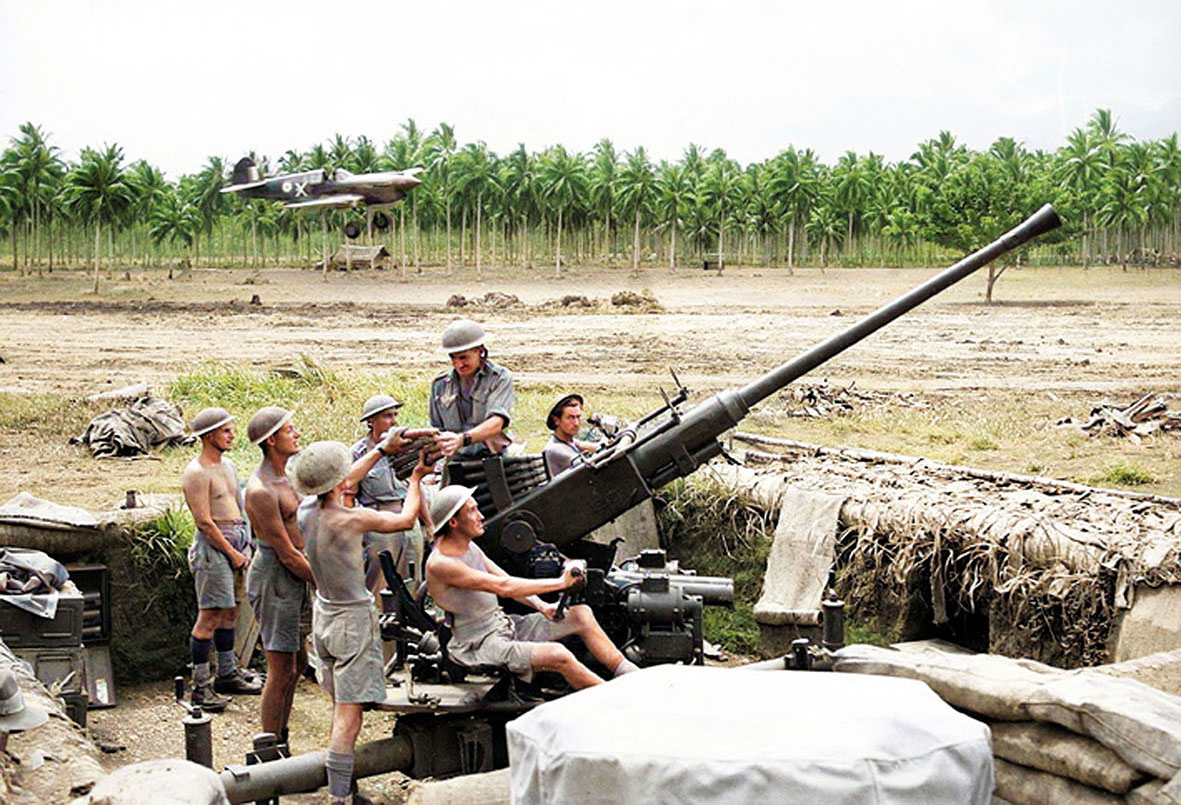 A Kittyhawk comes in to land at No. 1 Airstrip, guarded by an anti-aircraft gun of the 2/9th Light Anti-Aircraft Battery, during the Battle of Milne Bay

But first they needed Port Moresby. In the still of an August night, Japanese marines sailed quietly into Milne Bay, a long, malaria-ridden dead end at the far eastern tip of Papua, to unleash an audacious pincer movement. Unbeknown to them, however, a secret airstrip had been carved out of a coconut plantation by US Engineers, and a garrison of Australian troops had been established, supported by two locally based squadrons of RAAF Kittyhawks, including the men of the famed 75 Squadron. The scene was set for one of the most decisive and vicious battles of the war. 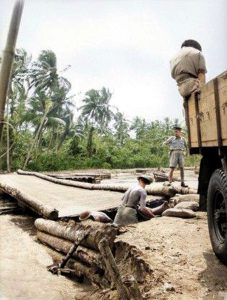 Australian troops repairing the bridge on the main route between the pontoon wharf and the Gili Gili-Waigani area, with Major-General CA Clowes supervising

For ten days and nights Australia’s soldiers and airmen fought the elite of Japan’s forces along a sodden jungle track, and forced them back step by muddy, bloody step.

In the Canberra Times, on 7 September 2019, Michael McKernan—a Canberra historian—wrote the following review:

Michael Veitch’s account of the battle for Milne Bay of 1942 shines a light on a little-known World War II story:

In 1993, Prime Minister Paul Keating visited the Australian War Memorial to unveil a newly refurbished Kittyhawk aircraft that had come into the Memorial’s collections some months earlier.

Also present in Aircraft Hall for this significant event was the original pilot of this particular aircraft, Bruce ‘Buster’ Brown and his wife Polly. As soon as the silk parachute covering the aircraft was withdrawn by the Prime Minister visitors gasped and applauded as the resplendent machine was revealed, bearing the name ‘Polly’, which Buster had inscribed on his plane in honour of his, then, fiancée.

The Prime Minister said he was amazed that this was the only surviving Kittyhawk in a public collection in Australia. As a kid, he said, he had played at Bankstown Aerodrome, roaming on and around the dozen or so Kittyhawks parked on the edge of the field. They must all have been sold for scrap, he suggested, regretfully. 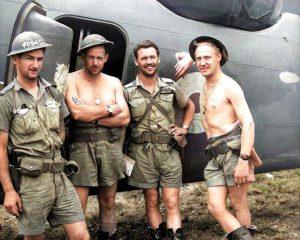 Thomas Fisher’s photograph of the happy crew of Lockheed Hudson A16-246 of 6 Squadron RAAF, after their return from attacking Japanese destroyers which had been shelling Australian positions in Milne Bay

Michael Veitch, the author of this excellent and engaging book, would have applauded the Prime Minister’s sentiment. Veitch’s main point in narrating this crucial battle is the close and essential co-operation between the Australians in the sky and the Australians on the ground in repelling the Japanese.

The soldiers called the aircraft ‘airborne artillery’ and each morning of the battle, from 25 August to 7 September 1942, the Kittyhawks of 75 and 76 Squadrons would be in the air pouring thousands of rounds of ammunition into the enemy, who suffered from the lack of any protection from its own aircraft.

Sheltering in the jungle by day, the enemy emerged at night to press the attack for the landing strip which was the aim of the operation. Worn down by Australian soldiers and airmen, the Japanese eventually evacuated, throwing up the white flag for the first time anywhere in the Pacific War. The Japanese were stunned and humiliated by their loss.

Australian soldiers and airmen alike shared the horrible conditions of this battle, where the rain was continuous and the sun rarely seen. Readers well understand the appalling conditions of fighting on the Western Front during the First World War and I was astonished to read that at Milne Bay it was much worse. One soldier, Michael Veitch tells us, remembered beginning the night in a slit trench with water around his knees: ‘by the time he was relieved in the morning it was up around his chest’.

Milne Bay was the first airfield in the war to be constructed with Marston matting, prefabricated metal strips, perforated, which when deployed, allowed the use of modern and powerful aircraft almost anywhere. The trouble at Milne Bay was the ground on which the matting was laid. The place was a quagmire and every landing or departing aircraft threw up vast quantities of mud which coated everything. This was a great danger to the pilots and so ground crew worked overtime to try to return mud-encrusted machines to something like flying conditions.

Eventually, the aircraft from these two Australian squadrons had to be sent to Port Moresby for a thorough cleaning with pressure hoses. They then re-entered the final phases of the fight.

Before Milne Bay the Japanese had swept away everything before them, but this battle showed that they were not invincible. Far from it. Indeed, it is one of the great strengths of Michael Veitch’s account that he outlines the weaknesses, ineptitude and even arrogance of the attackers. ‘The fact that the Imperial Japanese Navy sent their men to Milne Bay without proper intelligence … speaks to their military folly.’ When the troops landed ‘they had no idea where their objective, the Australian airstrip, even was.’

The focus of the story, however, remains on the Australians. Mistakes were made, of course, and men killed because of lack of equipment, or misdiagnosis of the situation. But there are heroes aplenty. ‘Silent Cyril’ Clowes, the Australian commander, was unflappable, methodical and clever. Never appreciated by his superiors and uncelebrated in his lifetime, except by those who were there, despite his magnificent victory, Clowes saw out the war in a backwater. Peter Turnbull, commanding officer of 76 Squadron, died in combat, exhausted beyond his capacity to fly in any way safely. Milne Bay was an action of which Australians deserve to know.

Michael Veitch gives us a clear, non-technical account of this important battle, and a thoroughly interesting story, too. Turning Point and ‘Polly’ in the War Memorial brings the lives of these brave and dedicated Australians into full light.