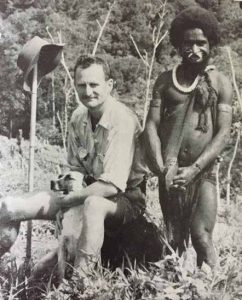 Thank you to Jan Sinclair for giving me the honour and privilege of being able to say a few words at this Tribute to Jim.

For the benefit of those present, my name is Ross Johnson and I also was a Kiap having joined the Administration as a Cadet Patrol Officer in 1952 – like Jim who joined the service in 1948, I also was only 18 years old. Jim said, in his first book ‘Beyond the Ranges’ that books written by Jack Hides, Monckton, Humphries, Champion and others were his motivation to seek ‘adventure and to climb mountains’. My motivation was slightly different as I had been brought up as a child at Edie Creek in the Mandated Territory of New Guinea preWW2, returning after the war with my parents to Wau. ‘New Guinea’ was my home and my country and although I probably didn’t know it at the time, it was a foregone conclusion that one day I also would end up as a Kiap.

Pat and I have known Jim and Jan for nearly sixty years, having first met when Jim became ADO at Wau in 1959. We were either going on or returning from, recreational leave and were spending a few weeks with my Mother before taking up a posting at Kainantu. My Mother became firm friends with Jim and Jan and this connection lasted all the years of her life both in PNG and later, in Australia. Although Jim and I never served together during our service in PNG, this ‘family bond’ continued with us becoming, over the intervening years, firm friends.

Jim was one of the post WW2 Kiaps who sought adventure, the opportunity to make a difference and in the process, like most of us, growing to love the work (they even paid us for doing it), the country and its people. Those of us here today are more than familiar with the multiple roles we as young men undertook which for many of us ended with the successful transition of Papua New Guinea to full independence on the 16th September 1975.

Jim wrote an article ‘Yes, we brought them shell – the best shell they ever had’ which was published in the October 1975 edition of the Pacific Islands Monthly and reprinted in the September 2016 issue of ‘Una Voce’, the Journal of the Papua New Guinea Association of Australia. In this article, Jim ‘recalls some of his experiences and defends the work of field officers (i.e., Kiaps) in bringing the word of law to great tracts of once uncontrolled Papua New Guinea’. I commend this article as it puts into perspective the hopes, aspirations, experiences and the thoughts of what many of us were feeling at that particular time. I have taken the liberty of making copies of this article, so if you would like a copy, please help yourself!

The post war Kiaps built on the exploits of the pre-war Kiaps and I include here their Papuan equivalents, the ARM’s and RM’s, some of whom served in World War 2 as members of ANGAU and who formed the nucleus of the Department of District Services and Native Affairs in the Provisional Administration of the Territory of Papua and New Guinea. I well remember with pride that in my terms of service at Henganofi, Kainantu and Kerowagi in what was then the Eastern Highlands District, I was patrolling in the steps of my late father-in-law, Charlie Bates, who with Jim Taylor, John Black, Ian Skinner and several others opened up the Highlands during the 1930s.

All of us have shared experiences that Jim has recounted or referred to in his writings. Jim talks about tribal fighting and refers in his first book ‘Beyond the Ranges’ to an incident in 1952 at Tari where ‘ADO Carey, PO Neville and CPO Anthony broke up one ‘war’ involving thousands of warriors, by camping with their police on the battleground between opposing forces and arresting the ringleaders’. This reminds me of an incident at Kerowagi, Xmas Day 1963, when (in the middle of the Xmas lunch) I was told of an outbreak of tribal fighting between two large clans whereupon I, together with Interpreter Uka and a couple of unarmed Police rapidly drove, in the station Landrover, to the site and parked in the middle of the ‘no man’s land’ between the opposing two clans. This effectively broke up the fight and the ringleaders were told to go home and enjoy what was left of Xmas and to report to the Sub-District office next morning to sort matters out – next morning 500 people, representing both clans, turned up, such was the respect the people had for the Kiaps.

Jim talks about the thrill of leading a patrol into new country and contacting primitive bush people for the first time. As a Cadet Patrol Officer in early 1953, I also experienced the privilege of accompanying an exploration and first contact patrol into the Kairong and Simbai Valleys of the Schrader ranges (between the Ramu and Jimi rivers) unfortunately not leading, but at the end of a long carrier line as befits a CPO. We also, had to avoid arrows on several occasions. He mentions and acknowledges members of the Royal Papua New Guinea Constabulary such as Sgt Siria who accompanied Jim on his Kukukuku patrol – what a fine body of men they were and I agree wholeheartedly with his comments that old hands (me included) will ‘admit their debt to some wise old Police Sergeant or Corporal who gently, but firmly, put their Kiap on the right path and kept him there’.

In this respect I have very fond memories of two senior Police at my first married station, Henganofi – a Sgt Baiyak (Murik Lakes, Sepik), truly one of Nature’s gentlemen and a L/Cpl Kombo, who was with PO Gerald Szarka, CPO Geoff Harris, Constables Buritori and Purari when they were killed whilst on patrol at Telefomin in November 1953. Severely wounded by a tomakawk, Kombo none-the-less stood guard over Harris’s body and helped fight off attackers until reinforcements arrived. There were, of course, many other Kiaps either killed in the line of duty or by accident, the above is just one example as I knew both the Officers concerned.

I referred earlier to the ‘bond’ that developed between Jim and myself over the years even though we never served together. On reflection, it was more than ‘family’ oriented. We were all part of a unique body of men, each with our own version of our own immortality, nothing was impossible and we all basically spoke the same language. Distance and time were completely irrelevant – meeting each other after several years absence was of no account, we would pick up where we left off as if nothing had occurred – the bond between Kiaps is timeless. In less than a month a lot of us will be attending a bi-annual reunion at Kawana Waters just down the road and it will be just like yesterday except that unfortunately, we will be missing a few faces!

We all owe a large debt to James (Jim) Patrick Sinclair CSM OBE D.Litt – let’s look first at his Post Nominals and the citations, in part, which speak for themselves –

CSM: Companion of the Order of the Star of Melanesia awarded “For service to the community through contributions in the understanding of Papua New Guinea, its history, culture and heritage, and to district administration in the period leading to Independence”
Awarded as part of the 2007 New Year’s Honours, it was personally presented to Jim on 23rd April 2009 by the Governor-General, Sir Paulius Matane – time still moves slowly!

OBE: Order of eh British Empire awarded in 1993 for “services to the state and literature”.

D.Litt: Honours Degree in Literature from the Australian National University granted in 1999, for “distinguished creative achievement as a scholar in the field of the study of the people and history of Australia and Papua New Guinea”.

By far the biggest legacy is, however, Jim’s literary contributions which enshrine the history of Papua New Guinea from the days of the first European contact, up to the granting of Independence in 1975 and in some cases beyond. As well as being a gifted historian, Jim was a more than competent photographer, and the photographic illustrations in his books beautifully complement the written word. Who can forget his Magnum Opus, the recently published book ‘Middle Kingdom : A Colonial History of the Highlands of Papua New Guinea’. We Kiaps can feel justifiably proud of being a significant part of this history and we thank and honour Jim for his tenacity and resoluteness in recording our contributions for posterity. One final volume, ‘The Creek’ is still in the hands of the publisher and will be available during 2018.

If you have the time, may I suggest that, at a later date you browse the Internet, specifically ‘Keith Jackson & Friends: PNG ATTITUDE (Google Jim Sinclair OBE) and the ‘Professional Pilots Rumour Network’ (Google RIP Jim Sinclair) to view the many tributes to him. 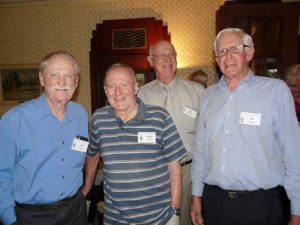 The Immediate Past President of the Papua New Guinea Association of Australia, Andrea Williams, has asked me to convey to you, Jan, and your family, sincere condolences on behalf of the Association. Of interest, Jim had been a member of PNGAA since 1977 and has made many contributions to the Association’s Journal, Una Voce.

In closing, I can only repeat what I said on the Ex-Kiap’s web site, ‘Jim’s passing represents the end of an era. Rest in peace, my friend. Bihain bai mi lukim yu’.