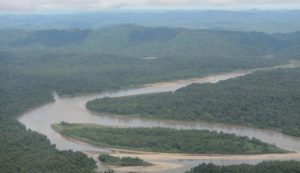 Bobcat is the elongated clearing in the middle background, with Purari River in foreground.

In October 2014 I was working at Bobcat drill rig as camp manager.  Bobcat was located in the jungle in the middle of Gulf Province in Papua New Guinea and the only way in or out was by helicopter.

On this particular day, I was going out on my field break and the first leg was by helicopter from Bobcat to Wabo airstrip on the Purari River.   My helicopter landed at Wabo at about 1130 hours and a few moments later a single engine fixed wing Cessna Caravan arrived from Port Moresby.  On board was my back to back, Duncan Smith.  We exchanged a few pleasantries and I gave Duncan my handover takeover notes.  We shook hands, I wished him good luck, and he got into the helicopter and it departed for Bobcat. 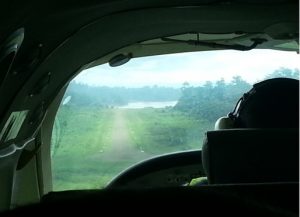 Landing at Wabo airstrip, or “short final” as pilots call it.

Meanwhile, although the Caravan was due to take off immediately for Port Moresby, our pilot had received a message to wait for another helicopter bringing passengers from another drill rig.  At about midday I was out the back of the tin shed that passed for the airstrip terminal and I heard a loud hissing noise which ominously sounded like a tyre going down.  Someone called out in Tok Pisin “tia bilong balus i plat” – the aircraft has a flat tyre.  I walked to the front of the tin shed and saw that indeed one tyre of the Caravan was flat.  The pilot cursed, as did the rest of us. A flat tyre on an aircraft at any time is a problem as the whole wheel has to be replaced – you can’t simply take the tyre off and put in a new tube and pump it up and take off. 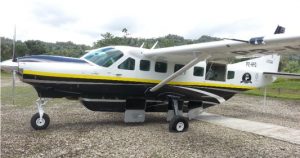 And when you are out in the boonies like Wabo, the nearest wheel with a fully inflated tyre is at Jacksons Airstrip at Port Moresby, about 1 hour flying time away.   The pilot got on the 2-way radio in the tin shed and spoke with his Port Moresby office and he was advised that fortuitously another Caravan was heading our way.  However, it was already 20 minutes out of Port Moresby and so they had to send it back to Port Moresby to pick up a spare wheel. Our pilot was very unhappy with the delay and apologised profusely and someone said “well better the tyre blew here and on not on landing at Port Moresby” and we all agreed with that.  I had a connecting flight to Cairns that afternoon departing Port Moresby at 1710 hours and was optimistic that there was still enough time for a replacement tyre to arrive and that I would get to Port Moresby in time.

We had no option but to wait, in the heat of the day. The generator was not running and the overhead fans were not working and although it was stiflingly hot in the tin shed, it was either that or lie on the ground in the shade outside.  I was exhausted after my 21-day rotation so I lay on one of the bench seats in the tin shed and slept soundly.   I was awoken by an aircraft arriving, but it was from Mt Hagen and only picked up passengers for Mount Hagen.  It was about 1330 hours now and I was calculating the times and I could see that the chances of me making that connection to Cairns were decreasing rapidly.

At 1515 hours, the Caravan arrived with the spare wheel, and an expatriate engineer.   The engineer did not bring a wheel jack with him and we had to hunt around for one.   Fortunately Wabo airstrip had a tractor which was used to tow a slasher to cut the grass on the airstrip and someone searched the tractor shed and found a small hydraulic barrel jack which I doubt would have been enough to lift the tractor but the engineer had no option and the wheel changing commenced.

Usually, when a wheel is changed on a Caravan, a special long shank jack is used and it is placed under a jacking point at the top of the wheel strut.  This is necessary because the wheel strut is under the pressure of the weight of the aircraft and as the aircraft is raised clear of the ground, the wheel strut de-pressurises and cribs towards the aircraft.  However in our case the engineer only had a small impromptu jack which he had to place at the bottom of the wheel strut. This caused complications and the end result was that there was not enough clearance for the replacement wheel which of course had a fully inflated tyre.  At this stage the engineer then decided that his best option was dig into the parking bay until there was enough clearance to put on the replacement wheel.   Someone produced a crow bar and a piece of scrap metal to use as a scraper and the engineer proceeded to dig the hole in the parking bay to get clearance.

This of course all took time and there was nothing I could do to speed things up so I just had to sit and watch and wait and let others decide my travel plans. 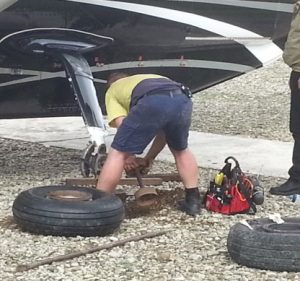 As the wheel changing came to a conclusion, it was decided that our original pilot would fly an initial load of passengers in the “rescue” Caravan to Port Moresby and we took off at 1545 hours.   As the flight from Wabo to Port Moresby was about one hour I resigned myself that I would miss my Air Niugini connection to Cairns as it was due to take off at 1710 hours.

We landed at 1645 and, as we taxied into the parking bay, I could see my Air Niugini flight sitting on the tarmac several hundred metres away at the International Terminal.   The minutes ticked by as we disembarked and waited for our bags to come off.   I decided that it was not worth the effort to run or get a car to the International Terminal because the manifest would have been closed, and anyway there would have been no time to negotiate Security and Migration as Cairns aircraft was due for immediate take off.

So, I grabbed my small overnight bag and considered a plan to go to the Oilmin accommodation in down town Port Moresby but, at the last moment, I decided to go down to Air Niugini departures desk in the International Terminal and get my ticket re-booked for the following morning.  In the back of my mind, there was a thought that there was a small chance that the departure of the Air Niugini aircraft might have been delayed.

I arrived at Air Niugini check in counter at exactly 1710 hours and explained my late arrival and asked about re-booking for the following morning.  The check in lady told me that the departure of PX 98 to Cairns had been delayed but unfortunately the manifest had been closed.  However, she went off to see the load master who gave permission to re-open the manifest for me and so she checked me in.  My small bag only weighed a few kilograms so I took it with me as cabin baggage and I rushed through Security and Migration, and finally arrived, very hot and sweaty, in the departure lounge where I was told that the flight was delayed until at least 1800 hours.

We finally started boarding at 1900 hours and, after all passengers were seated, there was an announcement by the co-pilot who apologised for the continuing delay and advised that we had to wait for the Captain who had arrived late into Port Moresby after piloting a domestic flight, and that they were waiting for the Migration Officer to process the Captain.  We finally took off at 1930 hours.  I was seated down the back of the aircraft and the Steward came by dispensing free alcohol and I got chatting with him. He said that some passengers were unhappy because the aircraft was very late to take off but I told him that I was very happy because I had arrived late for check in due to an aircraft issue way out in Gulf Province.

And so we landed at Cairns airstrip and, on my way to Customs and Migration, I stopped off at duty free and deliberated what to buy.    Soon, the flight crew arrived, and I asked them what had really happened.  The Captain, an older Australian, spoke up and said that the episode would be a chapter in his book when he wrote it.   He said that he had been flying the Air Niugini milk run Port Moresby to Vanimo to Port Moresby that day and even though Air Niugini management knew that he would be late arriving back into Port Moresby they failed to notify the Migration Officer who had processed the rest of the flight crew and then gone home.  So Air Niugini then had to send a vehicle to the Migration Officer’s house and bring him back to the airstrip to process the Captain and this was the main reason that the aircraft departed more than two hours behind schedule.   I thanked the Captain and told him that I had no complaints because the late departure had enabled me to get back to Cairns that day.

And so once again, the planets had aligned for me…but what else would you expect in the Land of the Unexpected.