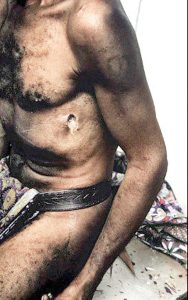 In 1980, while attending a conference on malaria in Sydney, I met Peter Sharp, who was at that time working in the Highlands of Papua New Guinea as a medical officer. He described to me an increasing number of cases where patients complained that they had pus in their chests and requested that a hole be made to let it out. The patients knew they had pus in their chests because a sorcerer had put a spell on them, and it was necessary that pus be demonstrated so that compensation could be claimed.

Further enquiry revealed that the holes in the chest wall had been made by the patients’ traditional village doctor with a bamboo knife after which water was poured into the chest. Inevitably pus appeared sometime later and a compensation claim for sorcery was justified. Not all these treatments had a favourable outcome. Peter Sharp conducted a post-mortem examination on a patient who died after this traditional chest surgery. 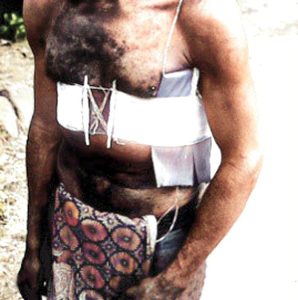 Inter clan rivalry and fighting was common among the Enga at that time. Each fight team had a nominated fight doctor whose task it was to remove arrows as quickly as possible from anyone wounded. This was important because the bone-tipped arrows used by the fighters were deliberately contaminated with faeces or dirt—an early example of biological warfare.

According to patients and their relatives, the Enga people, among whom chest cutting was observed, believe that a blow to any part of the body or an embedded arrow tip that has not been removed causes the development of pikale (bad blood). This fluid accumulates in the base of the lungs and eventually caused lyin (pus) to develop.

The patient with lyin believed that it was necessary to remove it and consulted the village doctor, usually an older man known for his surgical skill and known as patali pingi akali (rib cutting man). During the operation the patient sat upright and was restrained by family members while the patient bit on a piece of wood. The first cut was made between the sixth and seventh rib on the side where the pus was believed to be. The doctor probed into the chest cavity with his finger. The hole was then plugged with a rolled leaf or the stem of a taro plant. Sometimes a second cut was made higher up in the chest and more towards the midline. The fee for the operation was one or two pigs.

With the advent of western medicine some of the people preferred to go to the local health centre for the relief of their pikale. Being refused ‘treatment’ there, they had recourse to more traditional surgery. 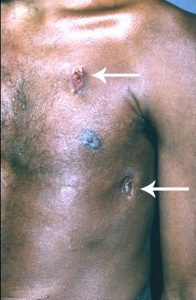 While the cases described here were in the 1980s when inter clan fights were still occurring, Dr Stan Wrigley saw evidence of chest cutting while he was conducting a survey for tuberculosis in the Lagaip area in the early 1960s. He saw scars unrelated to tuberculosis in the chests of some men and investigated their cause. These men claimed that one scar was due to an arrow wound, and that the other was the wound resulting from traditional surgery by fight doctors and as described above. When questioned about the results of these operations the men said: ‘some people died, some lived.’

The Enga believe that the origin of the chest cutting operation came about through the intervention of the mystical forest spirit people, the pututuli. It is said that a hunter once shot and injured a pututuli mistaking him for a tree kangaroo. He recognised his mistake, removed his arrow, apologised and released his victim. Many years later this hunter suffered a chest wound in a tribal fight. Later, in great pain, he believed he was going to die and asked to be left alone in the sun. As he lay there the pututuli came and pierced his chest with his long fingernail, releasing the pus and thereby saving the warrior’s life.

It is possible too that the public post-mortem examinations done traditionally by the Enga people may have encouraged some of them to think about ways to release the pus seen in the chest cavity of some cadavers. For example, fight doctors, those specialising in removing arrow heads, would be the ones more likely to think about the benefit of draining the chest cavity of their patients. In other Melanesian societies, where the club is the preferred weapon and depressed fracture of the skull resulted, war ‘surgeons’ became skilled at their treatment. In peace time trephining (opening of the skull) was offered by these men as a treatment for headache and epilepsy.

Societies everywhere sought to understand sickness and developed ways to treat or prevent health problems. Blood-letting of patients, once common in western medicine, is an example of a treatment thought to be of benefit, but eventually discarded. Chest cutting among the Enga arose from the need to solve a recurring problem—the infections which followed penetrating wounds suffered during the constant inter-clan fighting. We can only hope that the Enga realise soon that the best way to prevent these wounds is to stop fighting.