A kiap and a secretary

We are proud to share a little about the lives of our adored parents, Tim and Judy Terrell—and to frame their legacy that is so deeply connected to Papua New Guinea. Tim shared his story of Judy with you in 2019. To our despair, Tim slipped away quietly nine months later to join her on the 10 March 2020, just as the pandemic ‘became real’. We were fortunate to send him off with love and dignity just ahead of lockdowns.

Like so many of their generation, they were adventurous, curious, and courageous in taking on the unknown and forging new futures. They were exceptional—like their story.

Tim was born in Darjeeling, India on the 30 October 1929 on a tea plantation managed by his parents Alex and Joyce. Early in his life their home was destroyed by earthquake and then rebuilt. Tim was one of four, Mike and Jill were younger. Tim and his older brother Alan, who also spent time in TPNG as a pilot, spent their early years at boarding school in India. When he was nine the family returned to England for a visit, and it was then that Tim commenced as the youngest boarder at Ardingly College, Sussex, England accompanied by Alan.

The war created challenges and the boys were evacuated from England to Scotland and then on a troopship to India. Despite their guardian fracturing her leg at the start of the voyage and the engines failing, the then unescorted ship safely caught up with their convoy and travelled on to India to reconnect with their family. They subsequently travelled to England to complete schooling at the end of the war, returning to India in time to help pack up the family and migrate to Australia, arriving in March 1947.

After studying at Gatton Agricultural College, Tim helped his parents on their new dairy farm in the Numinbah Valley. The family found few attractions with dairy farming despite the beauty of the valley, and moved to Brisbane where his parents grew flowers for the Brisbane Markets and the now adult children explored new opportunities. Tim had loved reading about Papua New Guinea in books by Ivan Champion, Jack Hides, Ion Idriess and Frank Clune. When vacancies were advertised for cadet patrol officers (CPO) with the TPNG administration in early 1950 he applied and was selected. The following period of training at the Australian School of Pacific Administration (ASOPA) at Mosman in Sydney and, subsequently in Port Moresby, were memorable. Tim reflected that, of 30 CPOs who started the course with him, over half of the group ‘finished up in messy, bizarre or otherwise unusual circumstance’. Including 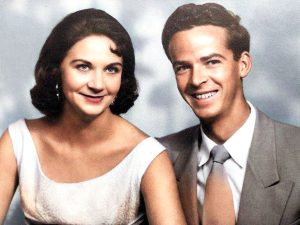 resignations, only 15 of the 30 remained in service at the end of two years.

In 1950 Tim was sent to Wewak, then in early 1951, to the patrol post at Green River. He remembered the arrival was impressive with the GSA Norseman becoming bogged and landing on its nose—requiring a propellor replacement and ‘panel beating’—no injuries.

The next posting in 1952 was to Lake Kutubu in the Southern Highlands District. Names Tim remembered from this period included David Wren, Bill Brand and Quentin Anthony—who we were so pleased to hear from in a kind message after Tim’s death. (The patrol reports from that period were all sent to the Australian Archives in 2002.) Observations that were important included the seepage of oil in some parts of the district. Tim provided supervision for an airstrip constructed at that time at Moro, near Lae. Tim’s next adventure was to Port Moresby in 1956 when he met Judy.

Judy was a proud and very beautiful West Australian. She followed the opportunities open to women at that time and had moved from secretarial positions at the University of Western Australia and working with the American Consulate to, at the age of 22, having her imagination sparked by the advertisement to be a secretary in Port Moresby.  Tim and Judy spoke about their romance and marriage at St Johns in Port Moresby followed by a honeymoon at Rouna Falls—a place they always loved—and their memories of ‘Woodie’, the proprietor of the Rouna Falls Hotel.

Following some study leave in Brisbane they were posted to Lumi. Judy and Tim frequently reminisced about their happy time there and related remarkable stories that are unimaginable to the current generation. Judy grew roses—that would be sent out to Wewak—and managed the radio. Judy was deeply committed to the people on the station and, as the only expatriate woman, she often told me how she felt protected by those around her—especially when Tim was out on patrol. During this period, Holly was born in Wewak in 1959 and, like many of the women who lived there, Judy found medical resources and help was very limited and was grateful for the prayers of the nuns. 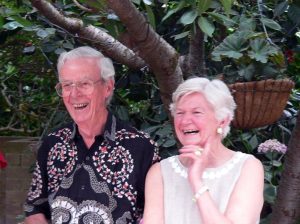 Their next posting was to Finschhafen in 1961 to build the Kiap Training Centre and take on the work Phil Fitzpatrick generously spoke about in https://www.pngattitude.com/2020/03/trainer-of-kiaps-tim-terrell-dies-at-90.html. Kim was born in Lae in 1962—again Judy and Tim needed to relocate for the birth. Their next movement was to Rabaul in 1964, followed by Port Moresby in 1965 where Tim worked in local government becoming the Town Manager and then Chief of Policy Secretariat, Department of Social Development and Home Affairs. They remained in Port Moresby until they made the difficult decision to leave PNG in December 1973.

Throughout this period, they both contributed to the community and to the work that was done to support empowering the people of Papua New Guinea. It is not possible in this article to talk about the work and relationships that grew and were supported by them. I do remember their hospitality and the remarkable people who would visit. I know many who read this will know much more than we do about their contribution. Judy and Tim’s passion for gardens was obvious in Rabaul and Port Moresby and became a unifying aspect across their lives—culminating in Canberra.

But I digress—after leaving PNG they moved to Darwin where Tim was appointed the official Member of the Legislative Assembly tasked with running local government and services, until Cyclone Tracy destroyed their ‘cyclone-proof’ new home. Surviving the cyclone was a pivotal moment for the family—grateful to be alive and unharmed despite the loss of home, photos and memorabilia from PNG. Tim used his emergency training skills to bring together our local community in the aftermath of the storm and initiated an evacuation plan, secured safe water and food and led around 500 homeless people over a period of about four days before ‘help’ arrived. There is no question Tim and Judy’s experiences and resiliency, honed in TPNG, helped through this period.

Moving to Canberra after the ‘clean up’, somehow Judy and Tim managed to rebuild our lives after we lost everything in Tracy. An early step was to buy a home in Farrer, the family home for the past 45 years, a place of beautiful gardens, flowing water and love. Another step was to join the St George’s congregation as Tim was a man of deep and thoughtful religious beliefs. Tim played a key role in getting this church built and helped out with church services over many years.

Canberra opened new opportunities for Tim to ‘do good’ as he forged a career as a senior public servant and a leader of Australia’s aid program, and for the next 20 years helped deliver aid to dozens of countries across Asia and the Pacific. As a colleague related in his eulogy, when compulsory age retirement fell, Tim was determined that was not to be the end of his contribution.

He led a team into Kosovo, as soon as the fighting had died down, to help create financial order and good governance. This is never a risk-free enterprise in the wake of war—for many people with money and guns, the last thing they want is transparency and good governance. He did the same again in the wake of the subsequent wars, Afghanistan and Iraq, in the Middle East. Tim worked hard and was proud of what he achieved over his career. We were incredibly proud of all the awards he received, but especially by receiving recognition in 1992 of Member of the Order of Australia (AM).

On his second retirement he devoted himself to the loves of his life—his family, garden and pitch and putt. This included becoming President in 2007 of the newly formed Pitch and Putt Association of Australia. He played pitch and putt regularly up until last year and loved his competitions and notched up more than his fair share of holes in one. And right up to his death he took on other passions. The fight to protect the viability and impact of Australia’s aid program, to challenge injustice, to support same-sex marriage, and to protest government action against Witness K and his lawyer.

Tim’s whole approach to people was gentle and compassionate. But he was resolute on public policy issues where social justice was at risk. Tim had an extraordinary work ethic and sense of duty—he learnt forbearance, tenacity, and strength to overcome life’s vicissitudes. Values that resonate, consideration for others, respect, loyalty and duty, to the very end. He was a man of deep faith that sustained him in the final years.

Throughout this period Judy supported Tim in all his work and in loving their family. Tim and Judy were unyielding in their love and support for their family. Tim was not one for grand affirmations, being more comfortable with quiet words of praise. Though this did not diminish the ferocity of pride he held for each—burning strong from our earliest achievements as babies, right through into our accomplishments as adults. Judy shared with her family an unconditional love that never faltered—we were all perfect in her eyes. Judy taught us the importance of family, her loyalty to family was second to none. She would fight for her family, her husband, children, grandchildren, and great-grandchildren. We were all perfect in her eyes. Her love of living things, of animals and plants, sentient beings—except for spiders that she sprayed mercilessly using a scorched earth approach! She adored the multitude of pets that joined the family over the years.

Holly remembers her market trips in Port Moresby, buying baby maganis (wallabies) at Koki Market, that we carefully cosseted in pillowcases hung off the bedroom louvres and, with droplet feeding, hand reared the little creatures and released them to the wild when strong enough—and other animals, echidnas, birds, possums. Judy had huge empathy with nature.

Tim and Judy were always hospitable and generous, welcoming and loving—each gave strength to the other. Both always so proud of their children, grandchildren and great-grandchildren. Like their love for their family, their love for PNG and the people of PNG—their respect for the country, the cultures and the potential of the peoples never diminished.